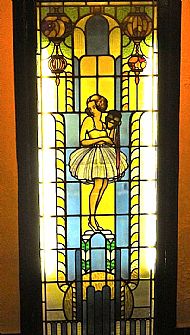 The South Wales Evening Post has featured one of the many treasures saved from the Neath Empire.  One example is the stained glass window shown left, which is a mavel of workmanship from a previous era.  The window is now in safe keeping at Swansea University, where art students can see the work done by previous generations.

Removing cherished items will not affect the many suggestions received for future use of the building - which can still include residental flats in part of the building that the public never had access to.

The window shown is just one of several now in safe custody at Swansea University, thanks to Jason Reynolds who cares for the heritage in the area in which he lives.
Read full report