Films are listed alphabetically in the categories shown in the sub menus. There is a synopsis for every title and preview trailers are available for the vast majority of films. 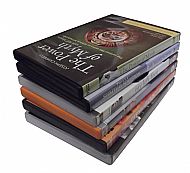 Members simply make their film choice and email the title and reference number to the Librarian who then posts the DVD out to them, together with its pre-paid return packaging.

There is no restriction on the number of films that can be borrowed during membership... one at a time only, though.

Films can be borrowed for up to one month.

NEED MORE INFORMATION ABOUT THE FILMS?

The following sites can be helpful in checking out other information about films such as critics’ reviews and film ratings...

The following is drawn from the British Library’s publication ‘Caring for CDs and DVDs’, July 2008.

Incorrect storage can lead to loss of data.  Discs are easily damaged by poor handling. They can be scratched and marked. They may be dirtied by the deposition of foreign matter and fingerprints. Such damage can interrupt playback.

✓   Ensure that hands are clean and dry before handing.

✗    Never touch the bottom (playing side) or top (label side) of discs.

✓   Always handle discs by the edge or centre hole.

✗    Never put anything on top of the disc.

✓   When not in use, always store the disc in its return packaging.

✗    Do not leave discs in playback equipment: there is a risk of heat damage.

Please Note  If you encounter playback problems DO NOT try to clean the disc with anything other than a clean lint-free cloth, wiping the disc gently from the centre to the rim.  If this doesn't solve the problem, please return the disc to the library with a description of the problem you encountered.  Thank you.

Exercising the care outlined above will help those who subsequently borrow the film to continue to enjoy its content.