Below just a selection from some of the positive comments we regularly receive regarding our dogs and natural rearing.....

I just wanted to say how glad I am that I followed your lead fourteen months ago when I picked up 10 week old CAWLEY and switched to Natural Rearing - raw food and no vaccinations - I've never looked back! 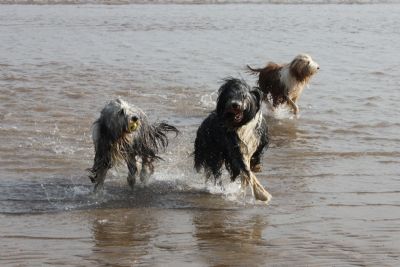 Cawley, Dylan and Kailu at the seaside

"I swapped my other two Beardies KAILU and DYLAN, and my Yorkie KADDY to NR too and now the four of them are bouncing with health. CAWLEY, now 16 months old, has never been to the vet, he's never even had an "off" day.  He eats extremely well, never refusing a meal, he's lively, fit, and full of fun.  I must admit to having reservations when I first swapped, where would I find all the bones?  It all sounded a bit "messy".  How would I know how much to give them? - I very quickly realised of course how easy it is, the bones are easy to find, suppliers of raw dog food seem to be increasing all the time - plus butchers, markets, even supermarkets, have a plentiful supply.  It's not messy at all, hand out the bones and just sit back and watch them enjoy them!  I won't forget KAILU's face the first time I gave her a chicken carcass - she looked at me like I'd seen the light!  KADDY had always had allergy problems throughout the 18 months that I had had him - constantly scratching, chewing his feet, and scratching his ears, but since I switched him to NR he has completely stopped, there's nothing for him to be allergic to now he's eating a natural diet. 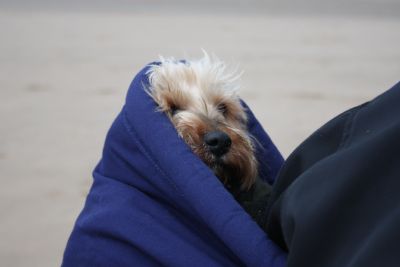 "I worried a lot in the first few months about not vaccinating CAWLEY, but I have two 'vaccine damaged' Beardies and I was determined to stick with it.  I'm so glad I did, he's been absolutely fine, I won't worry nearly so much with my next Talraz puppy! 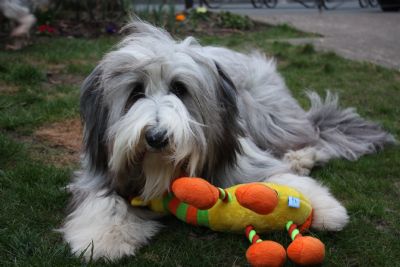 Cawley with his new toy on his first birthday

"We're absolutely thrilled with CAWLEY and expect to be equally as happy in another six weeks or so when we bring home our next little bundle of  fun!"

"Some 30 years ago our vet told us that giving raw meat to dogs caused worms.  This thought was with me until getting a Talraz puppy.  For a time I had shown my other Beardie and fed a well-known brand: after all the Kennel Club would not allow poor quality food to be advertised at Championship shows...?

"A friend introduced me to the Canine Health Concern site extolling the virtues of non-vaccinated raw-fed dogs.

"I noticed Liz and her Beardies.

"For several years I followed the health and successful progress of Talraz kennel.  Decision made:  if Liz found me acceptable I wanted a Talraz puppy.  I emailed Liz, spoke on the phone and was honest with the fact that the dog would be fed on kibble supplemented by raw food, while being aware that if I did not follow the advice given, it wouldn't be easy to say, should health issues arise.

"Closely following Liz's schedule, no health problems have arisen, only contact being made to share CREAGLION's achievements..

"CREAGLION came home with a goody bag of food, a toy, and siimple clear instructions for diet and routine.  He has been the easiest puppy to care for.  Sleep, out, food, play, sleep.  A very happy puppy, he scoffed his meals, and was soon joined on his diet by our fussy Shih Tzu pup.

Creaglion with his new friend the Shih Tzu

"In his first year, my previous Beardie was at the vet frequently with an upset stomach.  Twelve years ago this was £15 per consultation plus cost of medicine and stress on each visit.  CREAGLION and fussy Shih Tzu have only visited the vet once, when they stole chocolate!

"A healthy dog, I attribute much of this to his diet.  It is a pleasure to be in his company.

"Neither dog has upset stomachs and they are easy to clean up after in the garden and on walks.  Raw chicken frames (cut in half with secateurs to squash into boxes for the freezer) are particular favourites.  Sardines, eggs, and live yoghurt form a regular part of the diet so there is no need for supplements.  We buy meat and mince it at home - though most pet shops do sell prepared meat.  For training he was given finely diced baked ox liver.

" We are eagerly looking forward to a second Talraz puppy joining the family shortly on the same successful programme,"

"When we went to see Liz and her new brood of puppies we were surprised to see the adult dogs being fed raw meat - whole chicken wings to be exact - particularly as we had grown up hearing horror stories of dogs choking on chicken bones. As anyone who has visited Liz will know, her dogs are friendly, bright, and all look and are incredibly fit and healthy, almost like a butcher's dog!  Having agreed that we could have a puppy we decided to look into this, and after some reading ("Raw Meaty Bones" for one) we began to see the merit of the raw diet.

"The fateful day came in May 2008 when we drove to Crambe to pick up our new bitch pup, who was nameless at that point as we couldn't settle on a name.  After a long goodbye with her brothers and sisters we set off for the 3-hour drive home. We had promised Liz that we would try the natural diet and we had got some raw chicken and goats' milk ready for her first meal.  It was obvious that Lili, as she was eventually named, loved her food and she would eat everything put in front of her. Soon after Lili arrived we decided to try our three-year-old Spinone, Shambles, on the natural diet too.  When we mentioned to friends that our dogs were on raw/natural food they looked at us as if we were mad, but once it was pointed out that wild dogs (wolves, dingoes etc) don't have tinned/dry food, they began to understand.

"So where are we now over a year later?  Well both Lili and Shambles have raw meat every day, with raw vegetables added for vitamins/fibre.  We chop up carrots, broccoli, swede and cabbage, and mix it in with frozen meat bought from our local pet shop and they love it! We have tried heart, liver, and kidney too, but whilst they both loved heart, Lili doesn't like liver and Shambles doesn't like kidney - they both however love tripe.  That is one small downside as tripe does smell pretty bad!  We also add sardines, cottage cheese and yoghurt to add variety.

"Despite what we had heard about Spinones, Shambles was never a greedy dog and on occasions was quite indifferent to food, but once on raw meat etc she has not refused a single meal, often asking for her food before we get it ready.  Lili is energetic, VERY lively and a picture of health, and touching as much wood as we can, she has never had to go to the vet's. 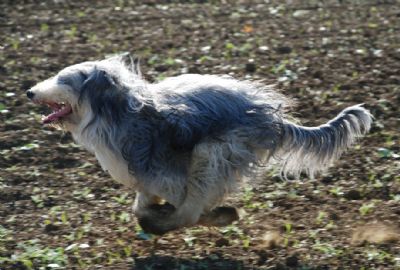 "One possible concern could be cost, but the packets of frozen meat are around 60p and we look out for bargains in our local supermarket to put in the freezer.

"Several times a week they have bones from our local village butcher and we are sure this is why Lili's teeth and gums are in such good order.

"Would we recommend this to other dog owners? - unreservedly YES!!"