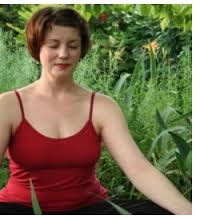 You don't have to diet to lose weight... just relax instead, say experts

Women who meditated and did yoga lost an average of five and a half pounds (2.5kg), a study found (file photo)
Women who want to lose weight should ditch their diets and learn to relax instead, research shows.
At the end of a two-year study, women who followed a programme of yoga and meditation had lost weight and kept it off, while those who focused purely on exercise and nutrition had not.
The 'relaxed' women were also generally happier and healthier at the end of the study.
Experts believe that reducing stress stops cravings for fatty foods and sweets.
The team at the University of Otago in New Zealand divided 225 overweight women into three groups, according to the paper in the journal Preventive Medicine.
The first group took part in yoga, meditation, and positive visualisation.
The second group focused on physical exercise and nutrition, while the third received nutrition information in the post.
Study co-author Dr Caroline Horwath said all three groups of women had successfully prevented any weight gain.
But 'the most striking results' were in the first group --they had an average weight loss of five and a half pounds (2.5kg).
Dr Horwath added: 'At the two-year mark, these women were the only ones to maintain the psychological and medical symptom improvements.
'The positive results are exciting, given the limited long-term success of traditional dieting approaches.
'By learning and practising relaxation techniques as part of a wider lifestyle change programme, women have effective tools to manage stress and emotions without resorting to unhealthy eating.'
The study suggests dieting may not be the best way to lose weight.
And Dr Horwath said that helping women 'break free from chronic dieting' is the key to better long-term health.
The researchers also found that the volunteers with a 'weight-focused mindset' were more likely to lose interest in the study and drop out early.