Well it’s the 5th year this has been running and I thought it was the most fun one we have had, the weather was dry and cool and everyone was in good form.

Jan and her friend Peggy supported us and Jan was kind enough to buy everyone a round of drinks.

There were 15 players so it was a mixture of triples and doubles, we started at approximately 1:30pm and played four ends, and there some really tight matches and some very competitive games.

It was a reasonably close finish with Gareth winning by 28 points, Matt second by 24 points and third was Andy with 22 points.

Once the melee was finished there was a shooting and pointing competition, after several play offs the winners were declared.

This is the main event for the year, The Presentation night with awards going to the winner of the Terry Memorial Cup, team members and Club Person of the year (The person most voted for by the committee for helping out or going the extra mile) awards. There is also the winners and runners up awards for the Winter Competition and prize money for the Shooting and Pointing Competitions.

The presentation night started with a dinner provided by Nigel and Sue of the Rising Sun http://www.therisingsuninn.org.uk/  for the members and their families or friends.

The dinner was fantastic and following the dinner the awards were presented by Jan, the team Captains and Steve: -

Shunters Team Player of the Year

Buffers Team Player of the Year

Locomotives Team Player of the Year

Club Person of the Year

The winter completion went well, even with the early rain and cold weather it just about got finished on time, next year we start earlier, the places were as follows: -

1st Andy and Matt – both received awards for there achievements

2nd Nigel and Arthur – there was a consolation prize for second place, bag of Jelly Tots (Arhtur was so pleased he could hardly contain himself)

If there were awards for the most entertaining people of the day these would go to Nigel (the Tape) and Ryan (the Entertainer) as Nigel was a bit serious!!! Ryan did not stop from the start to the end (suffering today apparently)??? 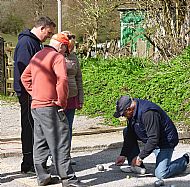 There was a raffle to raise money for the club and we would like to thank everyone who donated the prizes.

The evening went on until late and the Karaoke machine was well used, I will say no more as the embarrassing videos is out on Facebook, click on link at the top of the page.