The name Leadgate was traditionally considered to have been derived from a tollgate on this road intersection where the packhorses from the west exchanged their burdens of lead  for the coal needed for smelting. A more modern interpretation suggests the name derives from the old English “hlidgeat” meaning swing gate but this was provided for the many Leadgates around the country by a Swedish scholar specialising in languages outside of a geographical context acknowledging the existence of the most important lead producing area in the hills to the west. The earliest known map of Leadgate dates from 1754 when the hills to the west had the most important lead industry in the world. Pack horses carried lead on the Tyne/Wear ridge passing through Leadgate to Pontop where they exchanged their loads for the coal needed to fuel the smelting of lead from the mines. The Pontop coal mines were some of earliest in country and wagonways were used to transport lead and coal down to Tyne. The name “Leadgate” however identifying the place crops up earlier in the Clavering letters held by Durham University for the period covering the Jacobite rebellion of 1715. Sir James Clavering of Greencroft headed the Durham militia opposing this rebellion in the North which was led by the Earl of Derwentwater from his base at Corbridge. The Clavering letters are communication regarding pistols and horses by his observers stationed at Leadgate. This high point would have been a good look out post not only for the old Roman road leading from Corbridge but also Crook Hall where George Baker a leading Jacobite suspect was based. Leadgate would have been known to the Earl of Derwentwater as he owned the most productive lead mines in the Pennines including the local 800 year old Healeyfield mine from which lead and silver would have been transported through Leadgate. There exist several maps around the 1750's which seems to be the period when Clavering was in dispute with the Bishop of Durham regarding his encroachments into Lanchester Common. One such map shows the Leadgate Intake (d) which describes the piping of water. This is presumably tapping the head waters of the Stockerley Burn because Redwell is also shown to the East. Leadgate is also shown next to "A road to Newcastle passing Old Pitts and The Brooms which appear to be the early components of Leadgate. 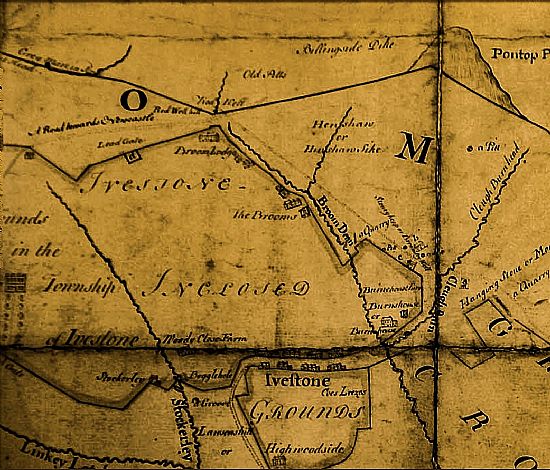 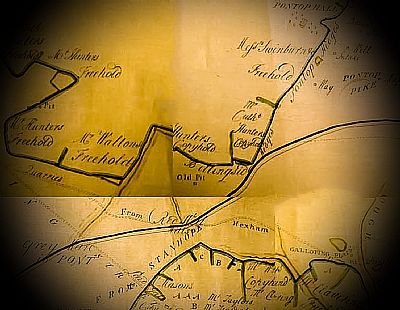 The above Estates map seems to indicate that the original Lead Gate was on the intersection of The Roman Road (Watling St) and the road from Stanhope which is given high significance. In the 18th century when this map was created Stanhope was at the centre of the world's most productive Lead mining area and most of that lead was sent to the port of Newcastle which is where that road from Stanhope was heading. It was most probably an ancient one from Roman times as it is known that there was a Roman fort (Whitely Castle) defending a lead/silver mine at Stanhope. Their main road south to York was Dere St which was always labelled Watling St on early maps.

The few subsequent histories that exist of Leadgate in the 1800’s record that its ecclesiastic parish was created in 1863 from the ancient parishes of Lanchester and Medomsley to comprise the ancient villages and hamlets of Iveston and Crookhall with an area of 4000 acres and a population of about 5000 with by the greatest number living in the village of Leadgate mostly engaged in coal mining and metalworking. Leadgate was considered to enjoy a healthy location high on the ridge seperating the Tyne and Wear watershed. Its settlement was spread along the West/East turnpike road from Consett to Dipton and centred on its crossroads with the ancient Roman Road of Dere Street linking Lanchester and Ebchester forts.