Around the mid 1890’s Mathew Auty a prominent Tyneside photographer must have visited Leadgate because postcards exist of Front Street with the famous Auty Series hallmark and although he died in 1895 Hastings a printing firm acquired his glass negatives and churned out coloured up versions into Edwardian times for sale.

In taking his photographs Auty possibly caught the attention of Billy Costello a local coal miner who lived close to the spot where these pictures were taken perhaps inspiring him to take up photography. Billy then in his thirties had recently given up football but kept a glass negative of himself dressed in his football kit which would turn out to be the earliest in a collection of about 90 later glass plate images of exceptional quality documenting Edwardian Derwentside.The majority of these are half plates taken on a mahogany and brass tripod based camera made by Thornton & Pickard considered by 1900 to be manufacturers of the best field cameras in the world. These should have been beyond the reach and expertise of working class men but for some inexplicable reason Billy acquired one and for a decade or more put it to use recording scenes both near and surprisingly far from his humble abode in West Street, Leadgate. 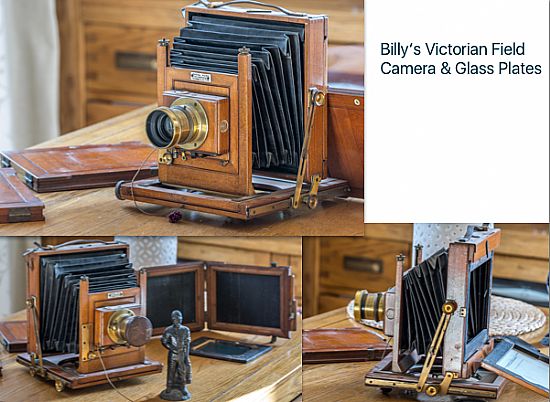 Billy’s camera shown above has two ivory plates on its front above and to side of the lens. One has the name Frederick Park who was eminent photographer of Colingwood Street, Newcastle, whereas the other states it patented by Thornton Pickard. In 1900 Thornton Pickard of England were making in mahogany and brass what were considered the best field cameras in the world at this time with variable shutter speeds that allowed photographers in Edwardian England to go forth and experiment with a range of techniques. The better quality had precision figer joints and a variety of fine adjustment levers and dials that allowed the lens to slide to and from the negatve plate holders. The shutter snapshot mechanisms had been improved down to 1/15th of a second allowing movement to be frozen without blurring. Although these cameras had dropped in price they would have beyond the reach of most working men but for some inexplicable reason Billy Costello a coal miner from Leadgate, County Durham was able to acquire one around 1900 and for the next decade or two put it to use recording scenes surprisingly far from his local base.

Most of Billy’s images are on post card sized glass plates (just over 6 x 4 inch) both in landscape and portrait format but its a mystery how he managed this, or how he developed the plates. Very few if any of his Edwardian period images survive as prints - most that have surfaced seem to have been printed after 2nd World War.