Excerpt from A Beard In Nepal 3

Travels with the Beard in Nepal, Bhutan and India

“Grab the chicken!” I yelled, and Tod dropped the large rucksack he had been packing and shot out of the conservatory door in truly Olympic sprinter fashion.

The rucksack, unwisely left to its own devices, toppled slowly sideways, sending bars of soap, bottles of hair shampoo and packs of thermal vests skittering across the slippy wooden floor from its open top.

Tod raced into the middle of our lawn and stopped dead.

Looking slowly around, turning full circle, he stopped again. Then, in the absence of anything chicken-like on the lawn, he stared in the conservatory window at me, raising his arms outwards slightly as he did so, in an almost Gallic gesture.

I’d have to have a word with him about that gesture or he’d be shrugging his shoulders as well soon; but I knew what he meant – he couldn’t see the chicken. I pointed helpfully towards the large pile of neatly cut, neatly stacked logs leaning against the six foot fence we share with our neighbour Kevin.

Tod looked over at the log pile and instantly spotted the chicken in question standing within beak-reach of the very top of the pile, and therefore within inches of fun over the hedge in the neighbour’s garden. Incidentally, have you seen what a chicken’s idea of fun can do to your flower beds?

In a matter of seconds Tod had whisked Andrewetta (it’s a long story) off the logs and tucked her under his arm. She glared up at him – yes, chickens do have rather a good line in glares – as he carried her back to the middle of the lawn and set her gently down on the grass. She completely ignored him and stalked off without a backward glance. That’s Tod off her Christmas card list.

We smiled. Andrewetta has character. We would miss her during the two months we planned to be away this time.

In 2009 we had spent five months in Nepal, most of that time in the small, remote village of Salle which is tucked away in a valley high in the Everest Region of the country. We had gone there to teach English as volunteers in the tiny village school, but were completely unprepared for the fact that our encounters with the children and villagers of Salle would leave a lasting impression on our lives. So much so that our outlook on, and approach to life itself would never be the same.

We were smitten – with the uncomplicated, hardworking villagers; with the wonderful, education-loving children who thought nothing of walking through the forested mountains for two hours, six days a week, to reach their school; and with the breathtakingly spectacular scenery of the Everest Region, high in the awesome Himalayas, towards the very roof of the world.

On our return to the UK in 2009 we managed to keep in touch with Kalyani, the young, energetic, village school headmistress with the delightfully quirky sense of humour.

It was a constant source of amazement to me, a veritable dinosaur, that we would dial her mobile phone number, and if the gods were in a good mood and not too busy that day, we would be able to chat with our friend Kalyani, with grandfather, with Kalyani’s Mum, and maybe with a water buffalo or two, as they went about their business thousands of miles away, in a remote village high in the Himalayas. How cool is that!

We returned to that village in 2011 and took as many presents for the villagers and children as we could cram into our luggage allowance. It was a memorable, emotional visit, not least because we could see that in many ways ‘the writing was on the wall’ for the village of Salle.

Vast tracts of the silent old forest that surrounds the village, the forest that muffles your footsteps and breathes down your neck, had been crudely cut down. The ragged ruins of the once green and vibrant trees, the remains of their trunks now split and shattered, reached heavenward towards a perfect blue sky for the help that would never come.

For news of the Great God Money had reached the valley, and now the forests of Nepal are paying the irreversible price of its pursuit. Even one tree trunk sold to the new ‘timber barons’ brings in a considerable amount of money, money which would otherwise remain out of the reach of the ordinary villager with nothing to sell.

Kalyani had married and left the village of Salle in 2010. When we returned in 2011 she was living partly in her husband’s village, and partly in Kathmandu. But her new husband lives and works in Australia, so Kalyani had begun the long process of applying for a Visa to allow her to join him there.

It was probably around the spring of 2012 that Tod and I decided to return to Nepal. By then Kalyani had begun to throw in the occasional,

“When will you come back? The villagers and children are missing you Tod and Fiona!”

at the end of our phone calls to her, and to remind us that her Australian Visa surely couldn’t take much longer to arrive. When it did she would leave Nepal to begin a new life overseas, and we had already begun to wonder if we would ever see her again.

We started to feel the now familiar pull on our senses as our thoughts turned more and more towards that little village in the Himalayas; we began to catch ourselves wondering how grandfather was getting on with his bees this year; how our cockerel ‘Lucky’ was faring, and how our friend Molly was doing. Hardly a day went by without one or other of us mentioning something about Nepal, about Salle, about Kalyani.

We missed them, and wanted to see them again.

The decision to extend our trip, to take in other countries this time, sprang from a number of different factors which I will touch on later. Suffice to say that by January 2013 plans for our next adventure were finalised, and we told Kalyani,

“Yeeesssss!” she screeched, and we all laughed. We were going to have fun!

So that is why Andrewetta never made it over the hedge into Kevin’s garden, and never experienced the chickeny delight of wrecking his pristine flower borders. We had been finishing the packing for our latest trip when we spotted our feathered mountaineer, and nipped her cunning plan in the bud.

I feel it behoves me to point out the obvious here – and that is that this book is not written as, nor is it meant to be a ‘travel guide’, and any references in its pages to places of interest reflect only the impact those places made on us.

It is simply our story, containing our experiences and our observations!  A Beard in Nepal 3 provides the reader with a glimpse of certain parts of this wonderful world through our eyes, in much the same way as our first two ‘Beard’ books have done.

We forget, don’t we? The human brain has a crafty mechanism designed to obliterate those most uninspiring memories, those memories you really don’t want to revisit, of things you swore you would never do again, situations you prayed you would never have to face again.

They are swiftly eliminated, eradicated, consigned to the brain’s recycle bin. Gone. Exterminated.

Well, no; not really. In fact, not good at all, because without that memory to tap you on the shoulder, to whisper in your ear….

We realised within minutes of settling into the hotel micro bus outside Kathmandu airport, and setting off towards the tourist area of Thamel, that things there had changed. And not for the better.

Clouds of grimy dust whipped up by the brisk, hot breeze swirled everywhere, over everything and everyone. The grime has a particular, disagreeable smell, and a matching taste that you remember instantly. There is no escape from it; the grime of Kathmandu seems to possess the ability to home in and settle on any area of exposed skin it can find, and to penetrate even the thickest clothing.

You will be scratching, coughing, and rubbing your eyes in no time at all.

The hotel driver greeted us enthusiastically. He remembered us; well, he remembered Tod and his beard, and reached out to give it a quick tug. Ah, the ancient art of beard tugging remains alive and well in Nepal. Tod grinned.

The Kathmandu roads appeared to be in a worse state of repair than on our last visit two years previously, and God knows they’d been bad enough then. We gazed out the bus window at a quite astonishingly chaotic landscape; one that looked as if the whole area had been bombed, and then hap-hazardly bulldozed, strewing random piles of stones, bricks and garbage everywhere.

There seemed to be even more rubbish around than we remembered, and the blue plastic carrier bag is undoubtedly breeding successfully in Kathmandu.

The garbage lay in thick drifts against walls, lined the edges of the road in place of kerbstones, and poured in massive, unsightly ribbons down the banks of the river we drove across - the river that was already clogged with so much rubbish that the small amount of polluted water in it couldn’t flow anywhere.

The monsoon rains when they came would move everything downstream, somewhere else; out of sight, out of mind.

We crashed, bumped and crawled along, somehow avoiding the moving mass of humanity, and the occasional meandering cow, that swayed in uneven waves across the route, and skidding past all manner of other vehicles, each equipped with a noisy horn and shouting driver. Shouting forms part of your contract if you are a Nepali driver, and it is the preferred method of communication in most circumstances.

We peered out the windows at the crowds milling around; at the all too many shades of humanity sitting or lying by the side of the road; at sad eyed women with tiny babies wrapped in filthy cloths and held close, their faces covered against the all-pervading grime; at elderly men sitting cross legged or squatting and staring into space, unheeded by the passing hordes, looking for all the world like badly-made statues which, having fallen off some truck or other were now damaged, unwanted, abandoned, never to be recovered.

This wasn’t right, we thought, and not for the first time. The wonderful, long suffering people of Nepal deserve better. But as I write Nepal is considered to be the poorest country in Asia, and the evidence for that ranking was appallingly easy to see along the streets of its capital city.

By the time we reached the hotel we were in sombre mood, but the sight of the familiar small side street and hotel entrance, and the staff grinning and waving to us soon cheered us up. They made a fuss of us, and Tod’s beard was, as usual, much admired. We laughed. It was good to be back.

We cheered up even more when they showed us to a bright and pleasant room; one of the best the hotel could offer.

Aahh; there is nothing quite like lying back and relaxing on a soft and comfortable bed after a very long and tiring journey.

Well, we’d be able to do that when we got back to the UK; in the meantime we’d be fine on the hard, unyielding bed in the hotel. At least we could have a shower; cold water is always so reviving. 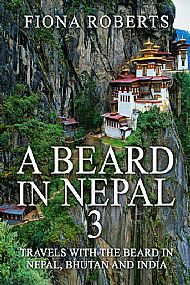