Fiona Roberts has been involved with the world of the Paranormal in one way or another for most of her life.

After spending nine years teaching English and having fun in Paris Fiona returned to the UK in the late 1980s, and continued teaching in Canterbury and Folkestone.

Having married quite a well known Medium she spent several years promoting the work of Psychics, Mediums and Clairvoyants, and ghost writing books on the subject of the Paranormal, Psychic Development and Prophecy, for her husband.

But it was an extremely unhappy marriage, to say the least, and divorce was inevitable, and welcome! Fiona has quite a bit to say about those years in her latest book 'The Curse', in which she lifts a corner of the curtain on the severely troubled character of the man she was married to.

Now happily married to Tod, and living in the north of England, Fiona is still very much involved in the world of the Paranormal. She works as a Medium, and writes on the subject. But that is not all she is interested in.

In 2009 the couple spent 5 months in Nepal and Tibet, teaching English. They returned there in 2011 and 2013 and  travelled the ancient 'Horse and Tea Trail' in China, and climbed up to the breathtakingly beautiful Tiger's Nest Temple in Bhutan.

Living something of an unconventional life, Fiona and Tod enjoy spending time riding the trikes that Tod builds and working on their allotments growing vegetables. They have a small flock of rescued ex battery hens, and a Jack Russell dog, both of which take up their time very pleasantly!

http://firobs.wordpress.com     should help to fill in a few gaps! 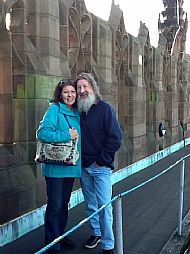 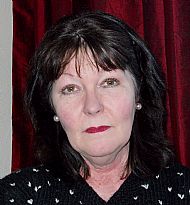