Excerpt from 'A Beard In Nepal'

Tod’s expression wasn’t exactly enthusiastic when I told him I’d booked us a two week trek in Nepal, but I expected to encounter a bit of resistance, my schemes usually did at first.

“It’ll be great,” I told him, flapping my arms about, “just think of all that healthy exercise, the wonderful views, and the Yaks and monasteries….”

He looked at me with a mixture of amusement and pity, probably more amusement this time around, although it was a close run thing.

“Two weeks trekking through the Himalayas? The Himalayas? Who are you kidding?”  he said, “Anyway, where is Nepal?”

“It’s sort of India way,” I said, feeling vague. He can be so hurtful sometimes, but I ignored his lack of enthusiasm, it was usually just a front anyway, and settled back in my chair to make one of my lists.

I’d got as far as
1. Walking boots
2. Sleeping bags

and was dithering over sleeping bag liners – would we need them? What did “considerably colder at night” mean?  when an email arrived from Emma.

Emma runs a small Fair Trade company called Hatti Trading which does business with Nepal, and she extends an invitation to her customers each year to go trekking with her in the Himalayas. As a past customer of Hatti Trading that was how I had booked our trek.

So expecting this email to be another update on arrangements for our forthcoming trip, I opened it. It told me that Emma had been asked to try to find a volunteer English teacher for a village school in Nepal.

“Huummm! Interesting,”  I thought, and emailed her back to say I’d had fourteen years experience as a TEFL (Teacher of English as a Foreign Language) teacher, although that was twenty years ago.

Minutes later another email popped into my inbox. Speedy things, aren’t they, emails? Sort of electronic pigeons. I came late to the electronic revolution and haven’t really caught up yet.

Emma wrote, “When you’ve finished the two week trek why don’t I take you up to the village of Salle in the Everest region of Nepal, and leave you there for five months? You can teach English in the school there. Bring Tod too.”

I went in search of my significant other half and found him standing on the outhouse roof. He was glaring at something he called ‘Stick and Lick’ which, when applied, was supposed to stop all leaks through the roof. But it didn’t seem to be sticking or licking at that moment, and judging by the look on Tod’s face it didn’t know how much trouble it was in.

“Huummm. This could go either way,” I thought, “I’ll try the subtle approach.”

“Hello dear,” I called up to him, “Bit of a change of plan. We’re going to Nepal for five months now, and I’ll be teaching in a village school after the trek. You’re ok with that, aren’t you?”

One of the things I love about Tod is his unflappability. He is getting rather deaf though, and that’s probably why he said,

“Five months dear,” I repeated, “You’re self employed so you can give yourself the time off can’t you?  You only have to ask nicely.”

He stared at me with rather an odd, unfamiliar expression on his face.

Tod nodded slowly and mumbled something in my direction which sounded like, “It wouldn’t make any difference what I said,” but I’m sure it wasn’t that, because we always discuss my ideas before we tackle them.

So that’s how it happened that Tod and I went to Nepal for five months.
Perhaps we seem unlikely adventurers. Neither of us is in the first flush of youth, and I was something like two stone overweight at the time. I wasn’t exactly as fit as a butcher’s dog either, or any tradesman’s dog actually, but Emma said the trek would be ‘medium difficult’, and then how hard could it be, I thought, living in a small village in the mountains for the following four months? I decided to go for it.

Tod was pretty fit physically, and once he’d realised that I was serious about this latest adventure, he was almost as excited about it as I was. Well, almost.
I work two days a week in an office. I love the work, and personally I wouldn’t have described my request for five months unpaid leave of absence as ‘unreasonable’, but it wouldn’t do if we were all the same, would it?  Our trip hung in the balance for several nail biting weeks, but then, albeit grudgingly, permission was eventually forthcoming.

So, full of renewed enthusiasm for our adventure I began to try to collect as much information as I could about the village, the school, and the Everest region of Nepal.  But I was surprised at just how little I managed to find out, and although I trawled the internet for hours at a time, what I finally ended up with would have fitted neatly onto the back of a ten Nepali Rupee note.

The village of Salle (pronounced Solley) is roughly twenty kilometres from the small town of Jiri. Jiri was, but no longer is, Everest’s Base Camp, and is about two hundred kilometres north east of Kathmandu. It was from here that the great Edmund Hillary set out on his successful expedition to conquer Everest. Salle is about two thousand metres above sea level, situated in a valley amongst the mountains of the Everest region.

I discovered that the only water available in the village came from one small pipe. I also discovered that we would not be able to drink that water, or eat anything that had been washed in it. Odd, I thought. Why would water, seemingly uncontaminated, coming directly from a small mountain stream fed by a glacier in a remote area of Nepal, be so dangerous to our health? But I was reliably informed that the miniscule meanies in that water would do us untold damage. Humm. P’raps better not mention that one to Tod just yet. A softly softly approach might be best for the moment.

Surprisingly, electricity reaches the village, but only enough to power one small light bulb per dwelling. Better add candles to the list, and get an eyesight check up before we go, I thought.

It seemed there were two schools in or near Salle, a Junior and a Secondary, but I could not discover anything about the children’s levels of English language, or indeed how many children attended those schools.

I visited friends in the UK who still teach in Language schools, and picked their brains about up to date teaching methods. Had anything changed, I wondered, since my teaching days?  It was fun brushing up and looking through the masses of new material that was available to today’s language teachers.

As time went on and our departure date drew nearer, friends and colleagues began to make concerned noises about a potentially dangerous lack of information about our destination; about the obvious lack of sanitation; lack of safe drinking water, and the dangers inherent in a lengthy trip to such a remote area of the world.

I already knew that Nepal was one of the planet’s poorest countries, but I didn’t mention to Tod that it also has an abysmal record of road transport safety – he’s a biker, and is very aware of road safety. Need to know only, I decided. P’raps better not mention that fact just yet either.

The list of inoculations we needed seemed endless, and of course some of them were only available privately and at considerable cost. Following our second of three rabies inoculations the nurse rang us in a panic,

“Are you ok?”  she asked somewhat breathlessly,  “Only, there should have been at least a two week gap between the rabies injections, not just one week.”
“I’ll call Tod,” I said, “He’s just at the window barking at the neighbours, but I’ll get him to ring you back.”

We weathered that particular storm, and strode bravely on to the next.
I read up on altitude sickness. We’d visited Peru four years earlier and I’d suffered from it badly then. I remembered I’d sworn never again to expose myself to its effects. Huummm.  How high was the village?

The internet informed me that a limited amount of medication was available that just might help mitigate the worst effects of altitude. Another private prescription.

All of a sudden we were ready. Tod packed our rucksacks. We filled up to the absolute limit with stuff for the schools – books; pens; pencils; posters.
We said goodbye to everyone here, and I noted a curious similarity running through our friends’ expressions as they wished us well. It was a sort of astonished wonder – I was rather hurt. Were we really such unlikely intrepid adventurers?

At least Tod looked the part even if I didn’t.  His long, bushy beard and shoulder length hair had turned greyish over the past couple of years – he looked a bit as if he’d been living in a cave.

I wondered what they’d make of Tod’s beard in Nepal. 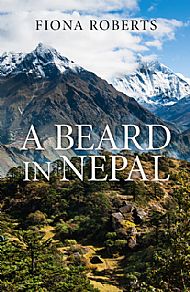 A Beard In Nepal

At the village cemetery

The oldest lady in the village