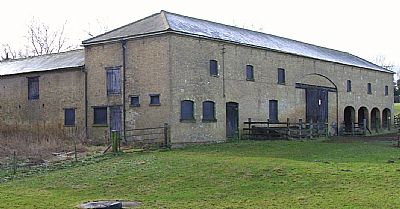 For some time now, the Rambler has been trying to solve the mystery of the missing hamlet of Chilcote(s).

The Domesday survey includes Chilcote (with a population of two) in the parish of Cold Ashby. The place-name, Chilcote, would appear to mean ‘young people’s cottages’ which suggests that these originally functoned as an early form of 'affordable housing’ - but where exactly were they?

There are certainly several mentions of Chilcote in the papers of both Pipewell and Sulby Abbeys during the centuries between the Domesday listing and the Dissolution. Also, abandoned settlement remains have long been visible to the south east of Cold Ashby Church.

However, these are assumed to have been either the original village of Ashby or an abandoned part of the existing settlement and are actually well away from ‘Chilcote’s Cover’, the named wood which appeared on the map of 1834 at SP 65257467 - over a mile away from these remains.

More relevantly perhaps, ‘Great and Little Chilcotes’ are named fields on the Thornby Tithe Map of 1840 in a location well east of ‘Chilcote's Cover’ but south of Thornby Mill which gives rise to the latest theory - that the ‘young people’s cottages’ were in the area of this abandoned water mill which is situated near Thornby Grange Farm and accessible by means of the narrow gated road to West Haddon. If so, they would now be in the narrow south western part of Thornby Parish rather than Cold Ashby. It may well be that this part of the parish was originally Chilcotes and that the settlement was somehow later incorporated into Thornby, even though, historically it had been considered as a separate settlement within Cold Ashby.

The Third Volume of The Agrarian History of England and Wales ( Miller, Finberg &Thirsk, CUP 1991) asserts that the settlement 'was farmed as a grange of Pipewell Abbey and is now again a group of three cottages'.

By the Nineteenth Century, there were several cottages near Thornby Grange Farm and the adjacent mill, so it may be that 'the three cottages' are some of these - yet, if three cottages at Chilcote were surviving in 1991, the place-name would most probably have been preserved on more modern maps and still in use locally, which, to the best of the Rambler's knowledge, it is not.

The Rambler would welcome any comments or corrections that might shed further light on this 'lost' hamlet or the story of Thornby Mill.

Comment from Jean Russell at 22:45 on 11 January 2016.
I have just saved a photograph of Cold Ashby-thank you. I am researching my family tree and have several ancestors who lived in the village. Name of Billing, I just came across this site during my searches. I will visit it again, but have to get some facts together to see if I can learn anything from you.
Comment from Ashby Rambler at 09:47 on 12 January 2016.
Always good to hear from those researching family history, Jean.
Do get back when you think we have something to go on and I'll make enquiries for you.
Good Luck with your research!