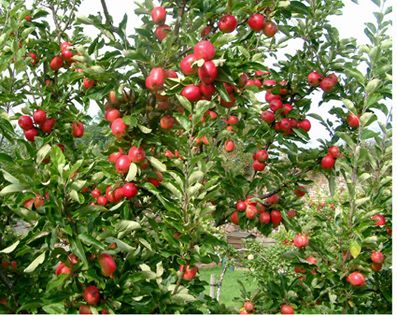 There have been plantings of fruit trees in the Old Orchard — apple, pear, peach, plum, cherry, crab apple and apricot — since the 1770s.


Three major tree plantings
(I) The first planting was just after the high wall was built in the 1770s by George Ross, Laird of Cromarty Estate;
(II) the second was from 1896-1904 by Alexander More, Head Gardener for Cromarty Estate;
(III) and the third began in 1995, during the restoration of the garden by myself.

Before then, in the 1660s Sir John Urquhart built a ‘Great Dyke’ that followed the line of the lower west wall of our garden today, to protect the ‘Great Orchyard’ (sic) from the east and north winds. In the 1730s Capt. John Reid, then living in the house you now see joined to the garden wall, planted cherry trees and built a wall to protect his ‘gardin and orchyard’.

Trees that did well were probably repeated in subsequent plantings, and new varieties from England, France and America were introduced alongside them. There are now 40 fruit trees in the garden with 6 surviving from the second planting. Alexander More made small identity tags, giving the variety and date of planting, that have survived on the garden wall for over a century. What you see today is one corner of a larger, enclosed orchard begun in the 1600s that evolved into a prolific commercial orchard by the mid-19thC.

The numerals (I, II or III) after each name indicate in which of the three planting periods each variety was introduced to the Old Orchard.

Apples for tasting on Apple Day (October 2005)
The Hawthorden (II, possibly I) was first cultivated and registered in Scotland (c.1780) and named after the birthplace of the 16thC. poet Drummond. As a popular Victorian apple, its popularity began to wane in the 1890s, but at least one was planted in the second planting which may have been grafted from one planted in the 1770s. The 1904 tree has not survived, but a replacement is planted at the north end of the high wall. The apple makes a rich flavoured applesauce or baked apple.

New Hawthornden (II) did not survive and the variety was difficult to find when I was looking for a replacement in 2000. Finally, Keepers Nursery, Kent, sent one, but it is probably not from the same root stock. Mr. More most likely took a cutting from the old Hawthornden, grafted it onto a new root stock, and called it New Hawthornden. No doubt, this was a common practice in gardens which had a sheltered nursery (the old Laird’s Nursery) to aid propagation. The newer variety is not much different from the original Hawthornden.

Striped Beefing (II) was first found in 1794 at Norwich, then grown for distribution in London in 1847. It became another popular Victorian apple that baked well and stored to be eaten at Christmas and into January. Its flavour is described as “brisk” (New Apple Book, 2002). The second planting tree has not survived, but its replacement is cropping well.

Adams Pearmain (II) may seem slow to become established in the first two years, but is a good cropper by the third and fourth years, as the replacement indicates. Its origins are in Norfolk or possibly Hertfordshire where it is known as ‘Hanging Pearmain’. The London Horticultural Society first noticed it c.1826. It became an “essential” for Victorian and Edwardian desserts and a “good market apple” in the 19thC. The London fruiterers “always paid a good price because it was attractive for windows”.

Stirling Castle (II) does well in cooler climates, and should be thinned-out for a consistent annual crop. Its origins (1820s) are traced to John Christie, “who kept a toy shop and grew apples in his back garden at Raplock or Causey Head, near Stirling.” This Scottish cooker was a popular 19thC. apple particularly in the north of Scotland and one of the “ten top cookers” (1883) in the UK. Pick it in mid-September and store through December.

Beauty of Kent (II, possibly I) has not cropped well this year, but that is probably due to the high yield last year. Brogdale (National Fruit Collection) classifies it as a 16thC. cultivar. W.A. Forsyth (A Treatise on the Cultivation and Management of Fruit Trees, 1810) knew it. I find that it presses well, especially when blended with other sweeter juices. We immediately taste its sweetness, then savour the lingering acidic flavour that cuts the thirst. If picked in September or early October, the acids turn to sugars quickly so that it can be an eating apple in December.

Warner’s King (II) originated in England. It became another popular Victorian cooker that was grown for home consumption and commercially throughout the UK, and “recommended in 1890 for the ‘artistic’ orchard.” I found it slow getting established, but that may be due to its position in a shady corner. When pressed for juice, it lends a rich flavour to bring zest to a sweeter variety.

Lady Henniker (II) is the most prolific survivor of the second planting. A check and feeding of the roots four years ago revived it to being an outstanding cropper with large fruit, particularly good for apple pies. It was first cultivated on Lord Henniker’s estate in Suffolk (1840-1850) before it was introduced to the RHS in 1873. Henniker’s head gardener noted that “its appearance by lamplight  is most telling”. Pick in early October and store and until January.

King of Pippins, (II, probably I) originated in either France or England. The small apple gives a rich, juicy, sweet taste recommended for cider and desserts. There is plenty of acidity. I have picked them in mid-September and stored them until February. Peel, slice, microwave and add yoghurt or ice cream.

Charles Ross (III) is a popular cooker in Scotland today. It was first grown in the late 19thC., then cultivated for markets in the 1930s. The trees bear a consistently good yield for picking in mid-September (earlier this year). It’s best cooked early and frozen for winter desserts. It will store through December, but has a tendency to loose its firmness and flavour if stored too long.

Red Devil (III) is a misnomer. There is no sting in its tail, but a consistently sweet, juicy, red-marbled flesh, that has a hint of strawberry flavour, like one of its parents, the Discovery (noted below). It presses well for an interestingly pink apple juice and is a delight to eat fresh off the tree. I keep it on the tree until the first week of October and use it within two weeks, although it will store through December for use in Christmas decorations.

Grenadier (III, possibly II) soldiers on with its spectacular size and yield every year. It probably originated in the UK, but not Scotland. I consider it semi-sweet and use it for baking or stewing into a apple sauce that can be frozen and later used with a variety of dishes. Be gentle, for it bruises easily. If pressed, I often mix it with the juice of a sweeter variety — Discovery or Red Devil. Pick at least by second week of September and use immediately in baking or pressing, although it will store through October.

Ribston Pippin (II) is a cooker possibly brought from France to England in the early 18thC. where it eventually became a highly rated Victorian dessert apple. In our climate, I pick it in mid/late October and store it until early January, when it is still firm enough for cooking.

Bramley Seedling (III, probably II) was a popular variety dating from the early 19thC. Would any Victorian orchard this size be without a Bramley Seedling? It is still one of the most widely-grown cooking apples in gardens and commercial orchards today. Pick in late October and it will keep through March in cool, dark conditions without wide temperature variations.

Discovery (III) originated  c.1949 in Essex to become a popular eater today. It is colourful and lasting on the tree — not dropping like many early varieties. This July was the driest since 1919, so I have tried to keep it on the tree before picking in late September/early October. I have stored them until December/January in cool, dark conditions.