As mentioned elsewhere on the website, the Orchard reflects three distinct planting periods:

(I) The first planting was just after the high wall was built in the 1770s by George Ross, Laird of Cromarty Estate;
(II) the second was from 1896-1904 by Alexander More, Head Gardener for Cromarty Estate;
(III) and the third began in 1995, during the restoration of the garden.

We have no record of the fruit trees planted in the 18th century (I), but we have the metal wall tags which identify the varieties that were planted at the turn of the last century (II) and a few of these trees still remain and bear fruit. Finally, we have a full list of all the trees which we have planted since 1995 (III). 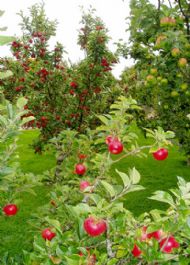 *Replacements for varieties identified but lost from 1894-1904 planting II.