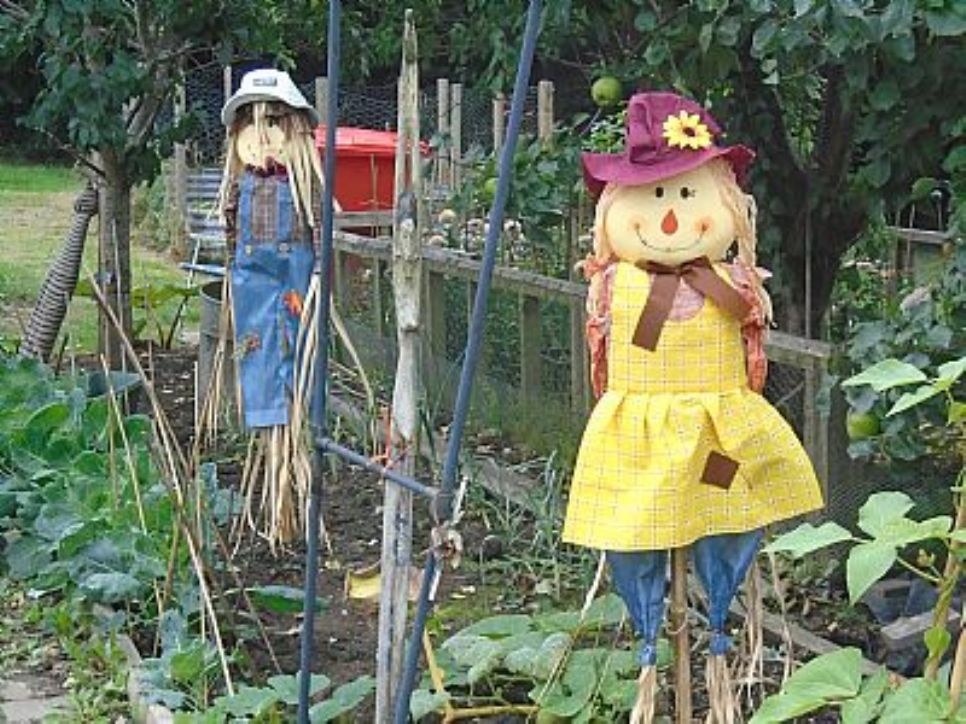 INTERESTING PIECES OF HISTORY FROM TONY SHORT AND TONY HARDY

I spent all of my early years at 45 Edward road and the allotment was an unofficial playground and the way to the woods for us.

The site was originally a field owned by the Kleinwort family who have been benefactors of the town for many years.It was made over to the town for use as allotments in 1945 (possibly 1946) and the day the big oak tree in the middle was felled we had the worst thunder storm I can remember.

The site stretched from Edward rd to the edge of the woods where Southdown close and Sheppys are now. Vale rd then finished level with our northern boundary. In the mid 50`s our first twenty plots were taken to make room for Vale road to be extended to its present length.

In those days we had a large communal shed shed standing roughly where Tony Hardy`s poly tunnels are. This was damaged by the 1987 storm and the destroyed by the spring time storm 18 months later. We built a smaller shed from what could be salvaged from the wreckage on the site where the new shed now stands. It had a rustic lean to it being built upon what had been our rubbish tip. (We were allowed one in those pre-interference days)

I started allotmenting in 1983 when things were a bit shaky, there were then dark rumours that we would lose it to building development. By 1985 some members were so concerned about this situation that it was decided to take a chance on an offer by the council to become a self run site.

Geoff Wyatt and Percy Frost were the prime movers and talked me into being the first secratary. `It only involves two or three letters a year ` they said. Having agreed, I found that I was also membership secratary,tasked with plot allocation and a suitable set of rules from the original council rules.

Geoff Wyatt moved house within a few months and Percy as Chairman became a colourful figurehead. So I ran the show for 10 years until Margaret Keen took over followed by Tony Hardy.

It`s hard to believe that there was a time when we had to strim a good number of plots because the hobby was not as popular as it is now. Recessions have been the biggest reason to rising member numbers.

It pleases me greatly to see the year on year rise in standards of plots, and some of the ingenious devices erected by members. The biggest difference compared to the early days is the prolifrication of individual sheds and water storage containers.

Thats all for now,if any worthwhile events from the past come to mind I`ll send them in.

Nothing to do with gardening I know but times gone by for sure, click above for my collection of old enamel advertising signs -

A BIT OF HISTORY FROM TONY HARDY 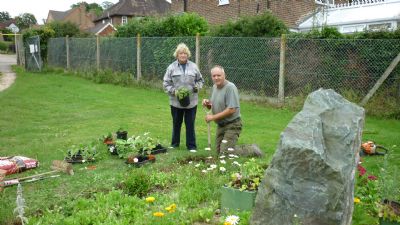 This patch up by the top gate that Pam plants up twice a year was built in 1996 as a memorial to Stan Catt and John Martin. Stan and John both lived in the bungalows backing onto the  the top end of the allotments.

The patio section came in handy as a welcome to the very first judges when H.H.T.C. went in for `South east in bloom` . We received a SILVER GILT  award and I proudly attended the presentation at Horsham District Council.

The large stone feature which weighs around a ton was given to us by Chris Scraba an allotment holder from one of his garden designs at Shermonbury mansion near Cowfold.

Stan and John were both (old school) gardeners. The ground always had to be dug by October with an annual ton of manure supplied by John Brooker. They didn`t use pesticide but just relied on lots of soapy water usually from the bath.

When they planted greens or sprouts they always put a slice of ruhbarb down in the holes. Epsom salts were used when things went a bit yellow, and like Bill Jenner another old school gardener  went out before dawn on a frosty morning washing the frost off of the plants before the sun rose.

Pam will continue to look after this site as long as she is able, but we do need to look for others to keep the memory of Stan and John going.

PICTURED TONY (ON HIS KNEES AS USUAL) AND PAM.

All members are urged to maintain at least one water butt and to provide some simple means of catching as much rain as possible in it.  As a safety measure, water butts must be covered. Members may use water from the communal butts situated by the container which capture water from the roof.
The mains water supply is turned off in the winter to prevent frost damage. Once this is turned on again (normally in April) please remember that our water is metered and use it economically.
In exceptionally dry weather, hoses may be used to re-fill personal water butts from the mains but never to water plots directly.  Water should be applied to plants and seeds by watering can.  As we have only two taps, please remember that others may need access to them as well as you.
Good Practice
It was agreed at our AGM that the Committee would provide some guidance on the most effective and economical use of water.  Views do vary on this but the following general principles have wide acceptance for average weather and conditions and members are urged to follow them.
1. Seeds will need some water when they are sown and the same applies when seedlings are planted out - so water in carefully with a can.  But be careful not to overdo this or small seeds, especially, will be washed away.
2. Thereafter, if there has been no rain, water should be applied sparingly until they are properly established.
cont.
3. There is no point in sprinkling small amounts of water on the surface as it will evaporate before penetrating. Some plants can be positively damaged by watering on their leaves so it is always best to water around roots.
4. By far the best time to water is in the evening.  Early morning is the next best alternative but watering in the heat of the day achieves little, and is wasteful, because of evaporation.  It is also likely to “bake” the surface, making it harder for water to penetrate when it next rains.
5. Shallow-rooted plants (e.g. peas) generally need watering more often than those with deep roots. Parsnips, carrots and similar plants are likely to grow longer and straighter without additional watering as they will “dig deep” to find the moisture they need. Applying water near the surface of such plants can do more harm than good as the roots may turn upwards to reach the moisture.  It may also produce forked roots.
6. Lastly, remember that while all plants will die eventually if they have absolutely no water, many perennials in particular (e.g. rhubarb) have amazing powers of recovery.  So don’t give up on them too easily!
VRAS Committee
March 2012 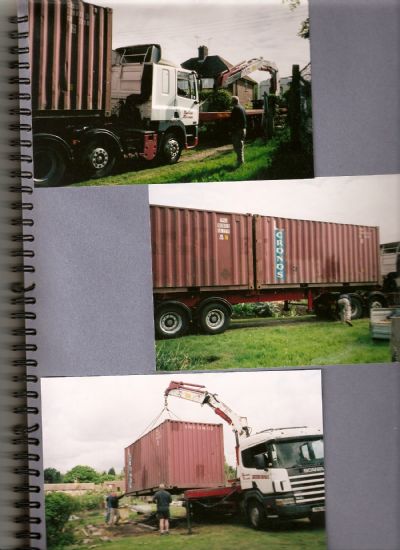 SHED AND VERANDA FINISHED AT LAST 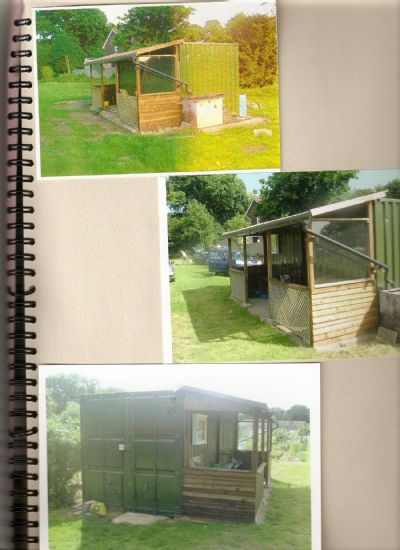 A VISIT FROM ST WILFREDS SCHOOL

WHERE THEY MEET STAN AGED 92 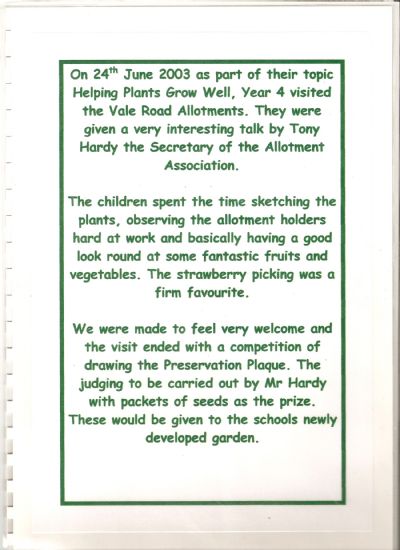 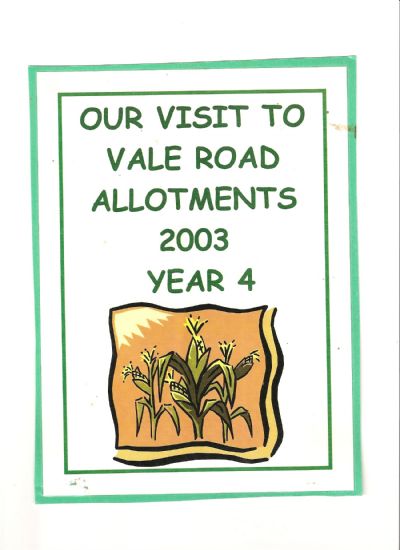 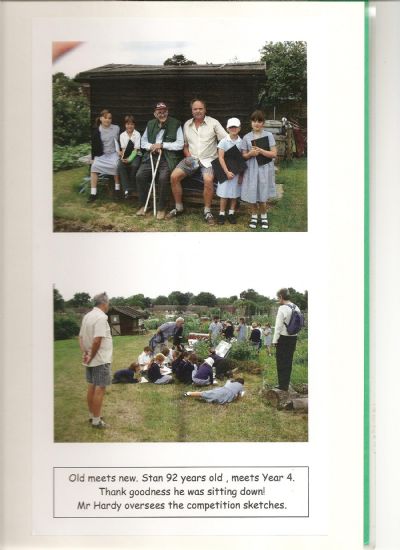