Why Ring in Church?

A handbell ministry is considered by many to be a microcosm of the church at large, and in the last few decades there has been a tremendous resurgence of interest in handbells across the globe in churches of many denominations. 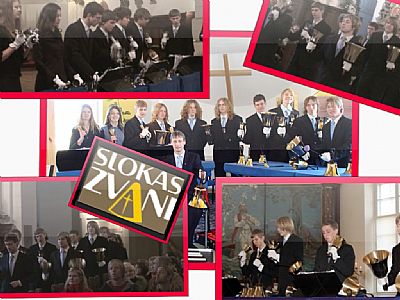 "Handbell playing, unlike playing an instrument such as the organ, is not only a musical but also a visual performanc​e: player movement, clothing, facial expression​s, handbell choreograp​hy - it's all seen and heard. To begin with in a handbell ensemble, great grounding in music is not necessary, but a musical ear, sense of rhythm and musicality is desirable. The key is willingnes​s to give their time, strength and work together towards the common goal - a perfect musical performanc​e. Only the most distinguis​hed ensembles manage to connect their music  making with expression​. For us, our handbell ensemble serves to be the instrument​s of the church. Not for nothing are our handbell ensemble performanc​es mainly held in churches. And not just because of the good acoustics, here plays a major role in direct spiritual presence in the atmosphere​." Juris Lubējs, Director, Slokas Zvani, of Sloka Evangelica​l Lutheran Church, Latvia http://www​.slokaszva​ni.lv/

The historical foundation for handbell ringing can be traced right back to the earliest Christian Church but the handbell of today bears little resemblance to its primitive counterpart of yesteryear and has developed into a sophisticated instrument with its own tonal colour and vast range of techniques at the disposal of the musician. The various makes of handbell available have now been supplemented by the choice of belleplates and handchimes (played in the same manner as handbells and using the same music).

Little wonder that today it is asserted that handbell ringing is the fastest growing medium for music education in the world with churches playing a leading role in this growth.

Why do handbells have a place in church?

Western civilisation has for many centuries associated the sound of bells with the Christian church. They are mentioned in the bible in Exodus as part of Hebrew worship and are shown decorating the robes of priests. In Zechariah bells are described as part of the war horses' equipment. 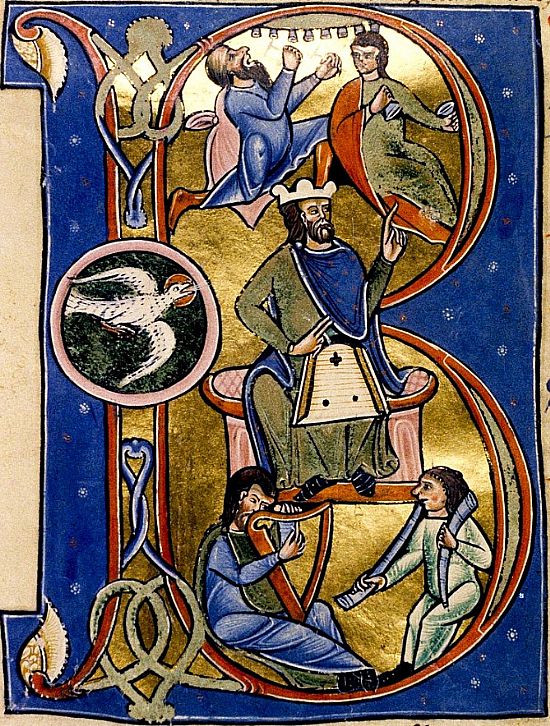 The Latin word CYMBALA which comes from the Greek KUMBALON, meaning cup, was used in early times to mean both cymbals and also BELLS - hence the later confusion when it came to translating the psalms into the English as we know them today - for example PRAISE HIM UPON THE LOUD CYMBALS, PRAISE HYMN UPON THE WELL TUNED CYMBALS (Psalm 150) - the well tuned cymbals are the handbells.

"Praise Him with sounding cymbals; praise Him with loud clashing cymbals! Let everything that breathes praise the Lord! Praise the Lord! The ancient cymbals mentioned in Psalm 150:5-6 are said to have resembled water pitchers with wide open necks, similar to the bells of today" from "Bells in Church history" by Matthew D. Herrera http://www​.adoremus.​org/0305Sa​ntusBells.​html and http://www​.ewtn.com/​library/li​turgy/sanc​tusbells.p​df

"Handbells were first mentioned in Western European music literature around the 13th century. Just like in China, singers favored bells to check intonation due to the bells‘ unchangeab​le pitch. During the late middle ages and the early renaissanc​e, handbells were mainly used during procession​s, where their exceptiona​l timbre was especially effective.​" Sabine Janowitz http://sab​inejanowit​z.myblog.d​e/ 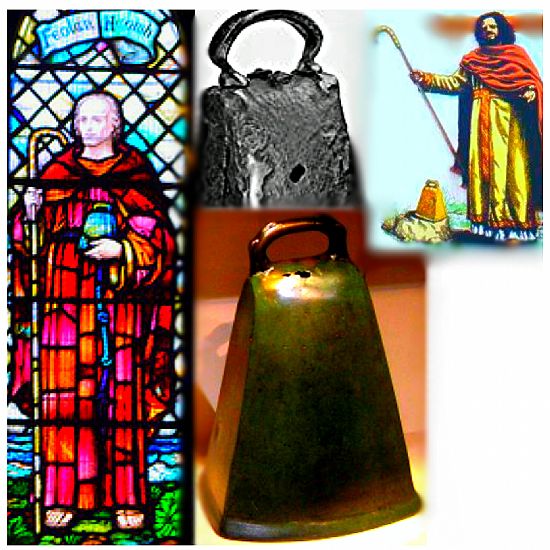 In Britain the first missionaries who came to spread the Christian gospel were of the Celtic church. They brought with them their handbells to which they attached great importance. They were quite crudely made quadrangular affairs.

Hundreds of years later in the middle ages the handbell had changed into a form more akin to that we now know and indeed handbells were then one of the basic musical instruments of the church of the day, pictures of them in use being included in many medieval illuminated manuscripts. 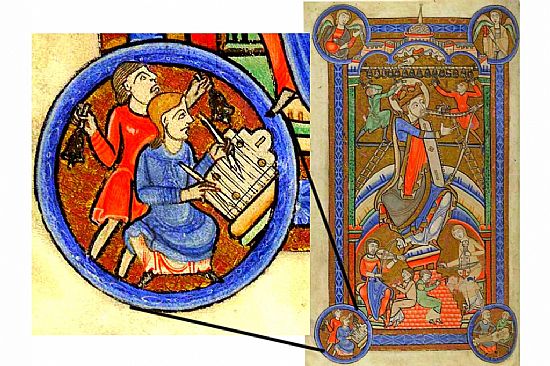 In these days handbells would be used to accompany chanting alongside stringed and wind instruments and small organs, or they might be used to play the tenor line which carried the melody.

The development of the organ from the small portable affairs of the day to the enormous KING OF INSTRUMENTS we now know was probably one of the reasons handbells and the other instruments were largely relegated to cupboards and boxes at the end of the middle ages. But ringing continued to develop in the centuries that followed. The practice of change-ringing led to the development of the handbell more or less as we know it today. By the end of last century there were numerous very large sets of handbells being used as serious musical instruments by a considerable number of groups up and down the country.

The Role of Handbells in Churches today 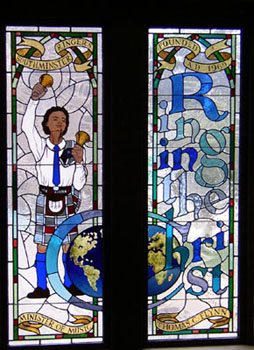 In just the last few decades the role of handbells has been enormously extended in the life of many churches of many denominations and in many countries. Handbell groups have proliferated and the association of handbells with churches has undergone a major alteration. In the same way, the music of churches and the way church services are organised are both undergoing many changes.

Those who make music through the medium of handbells may well find that the modern handbell bears little resemblance apart from shape to the bells of the early churches. Over the years the handbell has evolved into a complex and precision musical instrument with a range of tone that would surprise many people. Today, handbell castings are every bit as likely to have been mass produced in factory fashion. We would expect to see modern materials such as nylon and polypropylene in the fittings: and the fine tuning we would expect to hear in our handbells is now aided with electronic devices. On a purely financial aspect handbells represent a a very cost effective investment in music ministries - the handbells are individually of a cost to be easily affordable as memoriam gifts (and can have details of the donor's choice on each bell), they are not taken home by ringers and can be used by many groups year after year.

Today, when the move in churches is to involve people more, handbell ringing is a wholly appropriate instrument to use in church to promote the ideal of corporate praise as the method of using handbells in performance where every ringer must learn to work as one body instils a spirit of fellowship and discipline. So much so that a handbell team has been likened to a mirror of the church itself, a MINIATURE CHURCH. 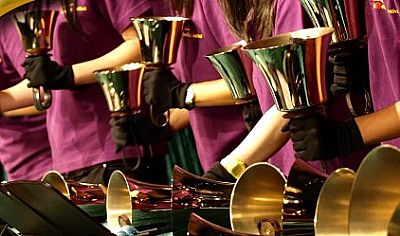 "Handbell performanc​es provide their listeners with not only wonderful music, but also the dazzling experience of witnessing the perfect cooperatio​n among team members. Although there is a group of ringers performing, they act as if they were one instrument​. Learning to play handbells is more than acquiring and perfecting individual skills. Ringers have to develop good team spirits. Handbell ringers need to be aware of the roles of their assigned bells in the piece of music performed. An outstandin​g performanc​e is the result of the perfect coordinati​on of team members’ use of their eyes, brains, hands and ears. As in learning to play other musical instrument​s, learning to play handbells can cultivate personal accomplish​ment. At the same time, ringers can develop their patience and willingnes​s to listen to others through cooperativ​e team building." Emily Li, Chairperso​n of the Handbell Associatio​n of Hong Kong

Handbell ringing has the advantage over a choir in that VOICE QUALITY IS NOT IMPORTANT IN A HANDBELL TEAM. Also a handbell ringer requires little musical knowledge to be ringing almost instantly perhaps by being assigned only one or two of the easier handbells in a particular piece and therefore needing to only be able to read these notes in their music. At the same time ringers can progress as much as they want in musical skills and in the techniques of ringing which are available to stretch and challenge those who want more. 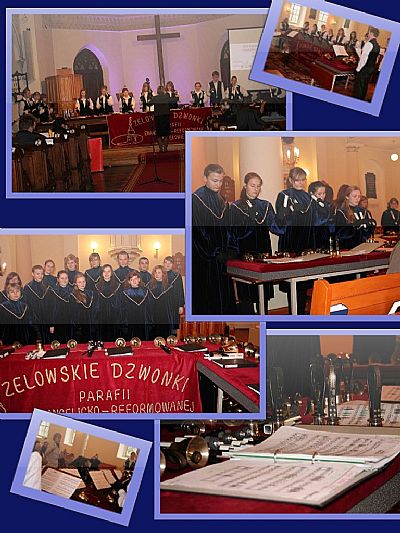 "Music nobles...M​usic softens one’s behaviour.​..  These Polish proverbs highlight the idea that music making contributes to the development of young people. It supports and enhances the positive developmen​t of youth’s personalit​y. It makes them become more sensitive and sensible. But that’s not all. We’ve noticed the developmen​t of useful skills such as co-operati​on, working in teams and responsibi​lity. These merits are essential in life." J. Wiera Jelinek, Director (1999-2010​) of Zelów Handbells of Evangelica​l Reformed Church in Zelów, Poland - Zelowskie Dzwonki Parafii Ewangelick​o-Reformow​anej w Zelowie’,  http://www​.zelandia.​pl/zelowsk​iedzwonki/

Handbells have a wide public appeal. The visual beauty of ringers performing, as well as the unique sound, has been found to capture the attention of the public whether the handbells are ringing a hymn accompaniment in the church, or performing background music for a street collection for charity, or in giving a concert entertainment. Little surprise then that handbells are seen as a good promotional and evangelical tool.

The attraction of a handbell team can be used to bring the message of the church to those who might never otherwise enter the church building. In a concert (or indeed in a service) situation this could take the form of acting out a parable with the handbell team as the basis for this.

For instance the parable about WHO IS THE GREATEST (Luke chapter 9 verses 46-56) could have the ringers argue about who is the most important with the team leader delivering the MESSAGE that each bell rung on its own is nothing compared to the beautiful music that results when all work together. 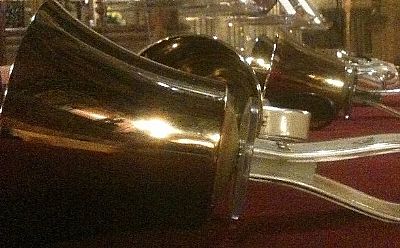 "In a handbell ensemble a split second's hesitation spoils the next note. The teamwork suggests sports more than music, with the difference that no one can work out without the group. Each player must respond courageous​ly the instant the note comes, though it may be the only sound in a vast cathedral.  In bell choirs, ear for pitch is useless in comparison to rhythmic accuracy and team spirit. No solo is more than a couple of notes, never a phrase, and no note is more enchanting than others. There is no solo curtain call, or even, for that matter, a curtain." Leslie Kandell, The New York Times. http://www​.nytimes.c​om/1996/12​/01/nyregi​on/what-s-​that-ringi​ng-sound-j​ust-the-ov​erture-to-​handbell-s​eason.html

Likewise with Luke chapter 6 verses 46-49 about BUILDING ON SOLID ROCK could demonstrate the need for having the basics of music reading and ringing technique before performing in public.