Looking for a fun activity that has a handbell theme? Perhaps for a short break from regular ringing rehearsals or at a gathering of many ringer groups, or a ringer party. The idea of a handbell group being a team, working together as one unit and every ringer getting to know each other better can be nurtured by activities such as those that follow.

Each of the games below can incorporate further interaction as part of the game e.g. by making it part of the game for each ringer to introduce themselves to the others in their team or perhaps to say something about themselves. And the accent is on fun! Many more familiar games can be given a handbell "twist" - have a "brainstorming" session with other ringers once they've seen the games and your imagination is the only limit! Have fun!

A pre-prepared set of cards has one letter on each card. All the cards when put in the correct order together will make up a bell saying. The number of cards and the saying will be determined by the number of ringers taking part. All the cards are distributed, one to each ringer. The ringers are told that the card with a red letter is the first letter of a word (and written on the reverse of that card will be the number of letters that will be in that word). The other letters are written in black. Ringers have to arrange themselves as quickly as possible into the correct order to make the saying. Note that where there are more letters than ringers the cards that are not distributed can be left on display in front of all ringers to be picked up by them as required so that some ringers may end up holding two cards.

Search for the hidden handbell shapes

In advance of ringers entering a room something like 40 card cut-out handbell shapes about 6" (15cm) tall are placed discreetly, but not hidden, around the room. Ringers group in teams (maybe 4, 5 or 6 in each team) and each team is allocated a collecting point of their own (e.g. a specific table). One member of the team stays at the collecting point and keeps a count of the handbell shapes as the team brings them in. After instruction the ringers must find the handbell shapes as quickly as possible and the winning team is the team with the greatest number of shapes collected once all have been found.

One ringer is chosen to go out of the room and another ringer hides a picture of a handbell (about 12" tall or 30cm) in the room. On the first ringer's return all of the ringers in the room sing a bell song or nursery rhyme (e.g. Frere Jacques), singing quietly when the searching ringer is nowhere near the picture, and singing the loudest when the searcher is nearest to the hidden bell picture. Continue varying the volume until the searching ringer finds the picture. Repeat as often as required with different ringers hiding and searching for the picture.

Knock away the handbell shapes

Teams of 4, 5 or 6 ringers stand in relay formation. About 6' (2 metres) from each team is placed 5 card cut-out handbell shapes each about 6" (15cm) tall on the floor. In relay the teams must throw a beanbag (or an old pair of handbell gloves!) at the handbell shapes to make them all move beyond a line drawn on the floor in chalk (or removable tape) about a further 3' (1 metre) away - the ringers remaining the same distance away at all times. The first team to knock away all 5 of their handbell shapes beyond the line on the floor wins.

Pin the handbell on the ringer 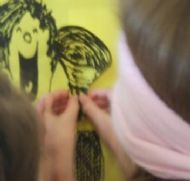 Teams of 4, 5 or 6 ringers stand in relay formation. For each team a large cartoon-style picture of a ringer is drawn (minus a handbell) onto card. A corresponding handbell shape is cut out of card. Each ringer's picture is fixed to the wall in front of each team. Each ringer in each team in turn must be blindfolded and make an attempt to affix the handbell shape (with adhesive putty or similar) in the hand of the ringer on the picture. A judge awards one point for each good attempt. The first team to finish also gets 5 points, the second team 4 points and so on.

About 8 colour pictures of handbells (e.g. from old Christmas cards, out-of-date manufacturer brochures etc) are each cut up into 11 pieces and then all the pieces from all of the pictures are jumbled up and put in one large pile on a table (there being more pictures than number of teams). Teams of 4, 5 or 6 ringers stand in relay formation, each in front of a table on which they will complete one picture (a "starter" piece having been given to each team, ensuring each team has a different picture). In relay each member of each team goes to the central table and returns with one piece of their picture. If they bring a piece not belonging to their picture it must be returned immediately by the next ringer in turn. The first team to complete their picture wins.

All ringers stand in a large circle. In turn they shout out their names. Then one ringer holds a large soft-toy style stuffed fabric handbell (or an old pair of handbell gloves) and shouts out their own name followed by the name of another ringer (who must not be his/her neighbour or the ringer who passed the bell to him/her) - e.g. "Mark to Helen" before throwing the bell to that ringer. The game continues and it must be checked to see that everyone has had the bell before stopping - those who make a mistake must run round the outside of the circle before rejoining the game. A variation would be to get each ringer to say something about themselves (e.g. what they like to do) as well as their name, both parts to be repeated before throwing the bell.

Teams of 4 ringers each sit round a table. Each table has a large piece of newspaper. In turn one ringer tears the newspaper to make a handbell shape. Every 5 seconds a bell is rung and the next ringer in each team must take over tearing the handbell shape. The most detailed handbell at the end of 1 minute wins.

Ask 8 questions of your fellow ringers

Each ringer is given a sheet of 8 questions and they must ask each other the questions and fill in one name beside each question on their sheet as appropriate. They must have 8 different names. The questions can be like "is left-handed", "has a pet dog", "has a birthday in September", "can touch their toes without bending at the knees", "can recite a poem", "has blue eyes", "knows in which year man first walked on the moon", "has a shoe size that is an even number". First to complete their sheet wins.

Teams of 4 ringers each sit round a table. Each ringer in each team has a sheet of paper on which is printed a drawing of a traditional style handbell with parts given a number as follows: handle - 1; handguard - 2; bell body/casting - 3; clapper head - 4; clapper flight - 5; clapper pegs (2 of these) - 6. Each team has a dice and each ringer in turn throws the dice. The ringer must throw the numbers in the sequence 1 to 6 before they can draw that part of the handbell. Each part drawn scores 1 point. First ringer to complete a drawing shouts "Bell!" and all groups must stop while a check is made. The winner (the highest score) at each table progresses to another table and the game continues until 4 games have been played. The ringer with the highest score at the end of 4 games is the winner.

Match up with other ringers to complete a picture

Pictures of handbells are cut into pieces. At the beginning of the game each ringer is given one piece of just one picture. The ringers must find the other ringers who have the other parts to complete the picture of which their own piece is only one part.

Pieces of paper are given to each ringer, the contents of which the ringers must not let others know. On each of these pieces of paper has been written the name of a handbell technique, an action for miming that technique, and a sound to make that represents that technique. On the command "Perform!" the ringers have one minute to keep repeating their sound and action while at the same time trying to locate the ringers with the same sound and action. Ringers must not say anything other than the sound on their piece of paper. They continue their sound until the command "Rest!" is given at the end of one minute, by which time all groups of ringers with matching actions and sounds should be standing together. At this point the director may get each of the groups in turn to demonstrate their mime and sounds for the other ringers to correctly shout out the technique being represented. Techniques and instructions as follow in the following format: technique name, sound to make, action to perform. Martellato, "whump", hammer action into imaginary table; Echo, "wow", bounce hand off imaginary table; Shake, "trrr", rapidly move hand backwards and forwards at shoulder height; Swing, "ee-oo-ee", swing hand from shoulder height round in an arc out, down and behind you; Thumb-damp, "clip", ring hand at shoulder height with thumb pointing upwards.