Adding Handbells to the music of the Iona Community

The Isle of Iona is a small island off the west coast of Scotland, where in 563 Columba founded a Celtic monastery that was very influential in its own times. In the middle ages it was the site of a Benedictine abbey and over the centuries has attracted many thousands of people on their own pilgrim journeys.

The Iona Community, founded in 1938 by the Rev George MacLeod,  is an ecumenical Christian community of men and women from different walks of life and different traditions in the Christian church.

Its headquarters are in Glasgow but its main activities take place on the island of Iona. For more information about the Iona Community click here

Amongst the most widely-known song and liturgical material from the Iona Community is the experimental worship developed by the Wild Goose Resource Group based in Glasgow.

Their name derives from one of the ancient Irish symbols for the Holy Spirit.

The Group exists to enable and equip congregations and clergy in the shaping and creation of new forms of relevant and participative worship, particularly concerned with enabling lay leadership

The hymns of the Iona Community/ Wild Goose Resource Group aim to have contemporary words with relevant modern themes and are frequently set to traditional melodies.

Iona Community music will sometimes have full 4-part harmonies, but often will have melodies written out for unison singing with chordal accompaniment

There will usually be no formal handbell part

Or Sometimes play a vocal line

Or Improvise within and around the chord notes

Let the organ/keyboard dictate the speed.

For example where the hymnbook shows:

The following accompaniment ideas can be used with the named Iona Community hymns.

The ideas can be adapted to many Iona Community hymns.


There is a published 12-bell Handbell arrangement of "Iona Boat Song" arranged by Robin Benton in "Songs Worldwide" published by Mayola Music code C212 which can be used as an accompaniment to congregational singing of the hymn.

12-bell arrangements can be transposed to the required key for accompanying singing using the chart accompanying each collection - which is provided with the music.  The ringer reads the notes as normal from the score but rings the bells marked on the chart as if they are the bells in the music. Since there are no accidentals in 12-bell music the ringers never need to think about which notes are in their hands - having used the chart to tell them which bells to pick up they simply read the notes as normal from the music.

Praise to the Lord for the joys of the Earth
(CH4 Hymn 165 - tune: Bonnie George Campbell) 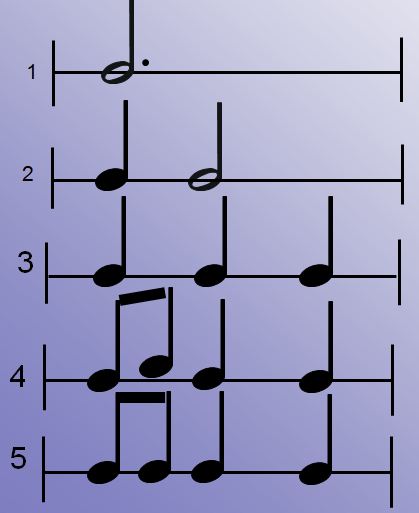 
1.  Play ALL notes at all octaves as written in the music score

5.  ALL notes all octaves

Verse 1 - Play all notes duplicated at all octaves


Verse 3 - Play all notes duplicated at all octaves

In a byre near Bethlehem
(Songs of God's People 51) 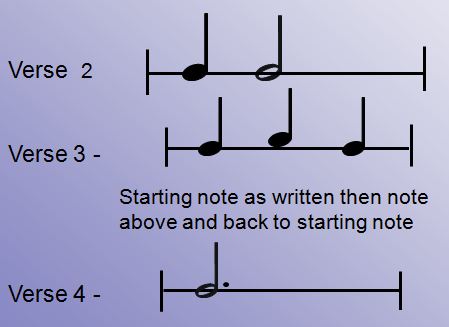 We cannot measure how you heal
(CH4 Hymn 718) tune:  Ye Banks and Braes

12-bell arrangements can be transposed to the required key for accompanying singing using the chart accompanying each collection.  The ringer reads the notes as normal from the score but rings the bells marked on the chart as if they are the bells in the music.

This 12-bell collection also has an arrangement of "Barbara Allen" which is the tune used for "The broken body" hymn. 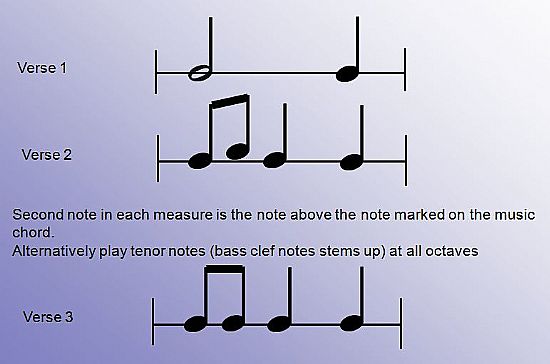 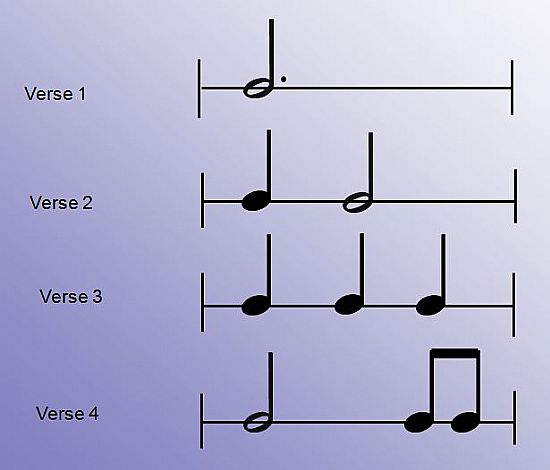 The following are handbell arrangements by Malcolm C Wilson of music used for Iona Community music which can be used as service prelude, offertory, postlude or for accompanying narration of Iona Community hymn text

Christ's is the World in Which We Move, 2-3 octaves, level 2, published by Green Rose Press code HB02-04

Dance and Sing, 2-3 octaves, level 2, published by GIA Publications code G-6314 (music used for Iona Community hymns "Dance and Sing All the Earth" and  "Lifted High on Your Cross"

Ho Ri, Ho Ro (alternative titles: Tiree Love Song, or Heaven on Earth), 2-3 octaves, level 1, published by From the Top Music code 20171 (music used for "The God of Heaven is Present on Earth"

Reflection on "Kelvingrove", 2-3 octaves, level 1, published by Lorenz code 20/1130L (music used for "Will you come and follow me if I but call your name" - The Summons)

Reflections on a Lewis Folk Melody, 2-3 octaves, level 1, published by From the Top Music, in collection "Celtic Reflections - Three Scottish Folk Tunes", code 20204 (music used for "Jesus calls us here to meet Him")