Adding Handbells to the music of a Praise Band

Praise Bands can have a mix of instruments, from keyboards and drums, guitars and flutes, to trumpets, synthesisers and tambourines. In other words - whatever resources you have available.

Handbells can be a part of this mix.

Praise band music will often will have melodies written out for unison singing with chordal accompaniment.

There will usually be no formal handbell part. Musicians may work from melody and chord symbols, or from full score in Praise Book, or may have parts written out for their instruments. They can all play all of the time or will plan in outline form advance which instrumentalists will play in each verse or chorus but be prepared to be flexible. This may also be done by a simple nod from a director to cue which instrument should take the lead with a melody or counter-melody.

Have an agreed cue for finishing.

Confidence is the key!

So how can handbells contribute to the mix of instruments in a Praise Band in the music of worship?

Or sometimes play a vocal line

Or improvise within and around the chord notes

Let the keyboard dictate the speed.

For example where the praise and worhip song shows:

1. Play the melody only, at all available octaves.

2. Play the notes for chords shown in chord symbols (ringers may require the chord notes marked on the music) with varying rhythms from verse to verse.

4. Play lowest note in accompaniment at all octaves (this can be one note per chord or repeating once per beat, or varying by playing two per beat).

5. Play note of chord name (on each beat) followed by note above (in between each beat), thus two notes per beat. This would only be if the ringer is in control of the note above the chord note. So if they normally ring D5 and E5, and the music says the chord notes are GBD (so contains the note D5), then the ringer will play in the measure shown below: D, D-E, D-E

This then has the effect of having passing notes for some of the notes at any given point in the music.

6. Improvise within and around the chord notes - as long as the notes within the chord are played on each beat the ringer can play other notes between, and vary the rhythms.

8. Improvise with free rhythm in each measure - starting and finishing each measure on printed note but varying other notes in between.

9. If there are printed counter-melodies for C instruments then play that on handbells at all octaves

Whatever is decided, in advance of the service agree what is going to happen in each verse or chorus and write short instructions beside each verse.

There are also published 12-bell collections of music suitable for accompanying praise and worship songs. While published primarily for performance they are generally written in the key of C with no accidentals so they can easily be transposed to the key for singing (some collections provide instructions for transposing to the key for accompanying singing). Ringers simply all move up or down the row of bells by one or more steps. They then read their normal notes (but are actually playing different bells, and therefore in the correct key for singing).

Examples of 12-bell music which can be used in the way include:

"There is a Redeemer" arranged by Patricia Sanders Cota in "Twelve Bells for Praise and Worship II" published by Hope code MHP2131.

The following accompaniment ideas can be used with the named praise and worship songs.

The ideas can be adapted to many praise and worship songs. 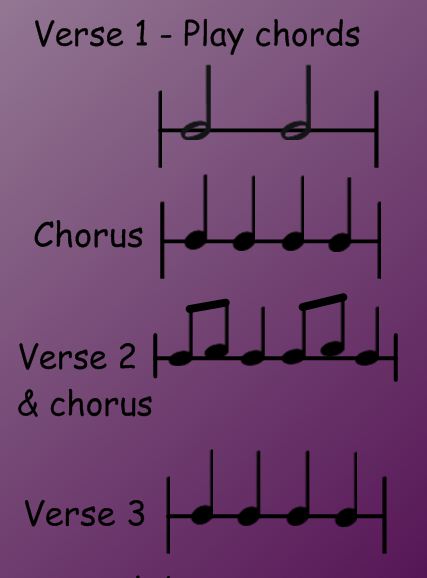 Verse 2 and chorus - Play note of chord name (on each beat) followed by note above (in between each beat), thus two notes per beat. This would only be if the ringer is in control of the note above the chord note. So if they normally ring D5 and E5, and the music says the chord notes are GBD (so contains the note D5), then the ringer will play in the measure shown: D-E, D, D-E, D

Verse 3 - notes of chord on each beat; in Chorus - start each measure with chord note but improvise free rhythm.

Verse 2 - play notes in the chord in each measure with the rhythm shown for every measure. 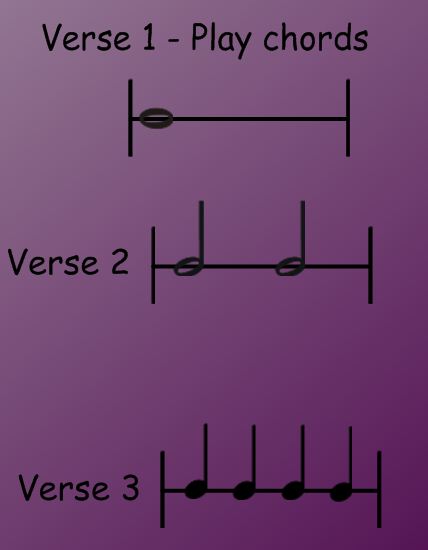 Play the notes of the chords in each measure using the rhythms in every measure as shown to the left.

This is scored for SATB 4-part harmony. So ringers could follow the guide below.