- sharing our history - telling our story

Before the Spanish Conquest ...... 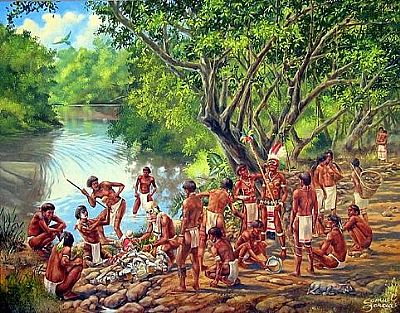 The first inhabitants to settle in Jamaica were the nomadic Tainos - a subgroup from the indigenous Arawak tribe who entered the Caribbean from South America settling in the Greater Antilles (Cuba, Jamaica, Puerto Rico and Hispaniola) and the Bahamas.  These indigenous people were the ones who first named Jamaica as ‘Xaymaca’ which roughly translates as the land of wood and water.

Physically they described as being of average stature with copper coloured skin, dark, flowing coarse hair which they dressed with oils, large and slightly oblique dark eyes and a forehead flattened at birth.

Described as a peaceful and mild people, the Tainos established their communities along the coast and river banks of these islands. This proved extremely advantageous as this location allowed them to spot any vessels containing their Kalinago enemies who occupied the Lesser Antilles and provided them with sustenance. They erected housing structures made from logs and poles with thatched roofs, dirt floors and no partitions. These buildings were strong enough to weather the harsh climatic conditions in Jamaica which brought natural disasters such as hurricanes seasonally.

Circular huts, called ‘caneyes’ were inhabited by the working class Tainos and the sub chiefs, with clear differences in size and making between each. ‘Bohios’ which were larger rectangular huts were inhabited by the cacique, these were difficult to make and hence provided differentiation between the common folk and their esteemed leader.

In Taino villages there existed a complex socio-political system that ruled over the most mundane social interactions. In this society three rigid social classes could be found: the naborias or working class, the nitaínos or sub-chiefs and the noblemen.

The naborias were responsible for carrying out the day to day activities of the village which include fishing, hunting and gathering and farming. The sub-chiefs were in a class directly above the naborias, they acted as supervisors to the working class, representing the second tier of hierocracy under the caciques control. The third and final class comprised of ‘bohiques’ or priests who were said to have a direct connection with the deities, medicine men who concocted medicines for the treatment of diseases and the ‘caciques’ or chiefs.

Each village was ruled by a cacique who controlled the day to day operations of the village which often included the division of work activities, dispensing justice and leading religious rituals and ceremonies. This was a hereditary position that was passed from father to son or to any eligible descendant.

Their religious system was comprised of a hierarchy of deities who controlled the sky, the earth and the weather. The religious rituals were headed by the cacique who to cleanse himself and become a vessel for the gods induced vomit and smoked tobacco which was grown in the Taino cultivation plots. In the state of intoxication brought by smoking the tobacco, it was believed that the cacique ventured to the plane of the gods and could communicate to them. These gods could either be good or bad (Maboyas) and so needed to be constantly adulated through ‘zemis’ which represented them in human and animal forms.  These were often made from wood, stone, bones and human remains.

Staying in the graces of these gods meant protection from diseases, natural disasters, the destruction of crops and wars. Sacrifices were made with propitiatory offerings of cassava bread and beer and through the ‘Pok a Tok’ ball game in which the loser could be sacrificed.

They generally went naked except in situations where men and women wore naguas and aprons made from cotton or palm fibres respectively to cover their loins. The length of these symbolised the social status and rank of these individuals. On occasions both men and women would adorn their skins with paints illustrating different patterns. This was often complemented by the wearing of earrings, nose rings and necklaces many of which were made from gold.

The Taino crafts were few and well-made comprising of:

These items along with calabash or gourds for storing and drinking water were used to furnish Taino huts.

Most property was owned communally with the exception of the abovementioned items which were personal possessions.

From their villages which were advantageously located near the coasts of seas or banks of rivers, Taino men took their hollowed canoes to troll for seafood such as turtles, manatees and fish- a major component of their diets which was often seasoned with condiments made from cilantro and peppers and then grilled or barbecued. To complement their diets, the Tainos practised subsistence agriculture using the shifting method where crops such as cassava, potatoes, guavas, corn, squash, beans, yams and peanuts were cultivated. From these plants an array of Taino delicacies were made. For example: the cassava plant was used to make flat breads or ‘bammies’ and fermented beer, popular staples for Jamaican cuisine today.  The nutritional profile of their diet were additionally expanded with berries, wild plant roots, tree barks, insects, birds, lizards and small wild animals.

Elements of the Taino culture still exists today in Jamaica with their special Pepper pot soup, bammies and beer fermented from cassava being staples in the Jamaican cuisine.  The words for barbecue, hurricane and hammock were also taken from their language.

The quiet and peaceful life led by the Tainos would soon be upended by the arrival of the Spanish who invaded Jamaica in 1494 and seized control of the island, effectively instituting the first system of European slavery in the island.