An excellent tidal harbour, but maybe avoid the drams with the harbour master .... 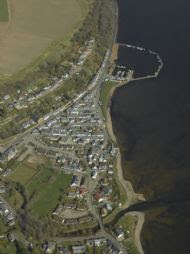 After we had recovered a little, we went shopping.

When provisions from the local Co-op are being brought aboard down the ladder at Avoch, make sure that the crew have checked the load carrying capacity of the carrier bag handles for the weight of the contents.

Failure to observe lesson 1 above, can result in the bag contents dropping into the water between the boat and the wall.

It is likely to be the shortest male crew member, who is always the 'have a go hero' and who has the major interest in the bag contents that will straddle the gap between the ladder and the boat (one foot on each and one hand on the ladder), and try to retrieve the bag contents from the water, while another crew member tries to limit the width of the gap between the boat and the wall with a boat hook.
It is difficult to pick up floating provisions with one hand, while being in the position described in lesson 3 above.

The helpful suggestion to attach the main halyard to the have a go hero's belt and lower him Mission Impossible style, will not be received as being a helpful suggestion and has the potential to illicit a response that should not be heard by ladies, children or churchgoers.

* Chocolate bars in apparently sealed wrappers are not watertight.
* Four bottles of San Miguel float in a carrier bag.
* A box of 12 cans Budweiser floats.
* A box of 4 cans of Stella floats.
* Cakes float but are again not watertight even though apparently sealed.
* Eggs x6 also float, though have the ability to drift away, until presumed lost at sea.
* It is almost impossible to use two oars like giant chopsticks to retrieve floating provisions, regardless of how desperate the crew member concerned is to retrieve them.
* All crew members have a part to play in the rescue operation, whether straddling / retrieving, hooking the ladder, supervising, making helpful suggestions, making unhelpful suggestions, or photographing the incident.
* It is almost impossible for the crew to fulfill their roles in the rescue operation while they are laughing uncontrollably until their sides hurt.
The inevitable does not always happen - floating provisons (with the exception of eggs) can be recovered in the manner described in lesson 3 above, without the have a go hero falling in!

(We were actually all sober, when this happened!)