History Beneath Our Boots 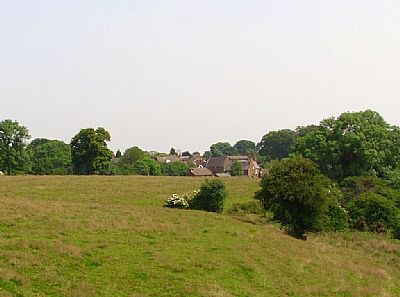 While walking in this area, The Rambler has frequently found himself contemplating its history, particularly the changes in the landscape wrought by those who walked the paths and tracks before him.

The following short summary of the history of farming and associated settlement around Cold Ashby synthesises what little knowledge he has. A list of sources which have most recently been consulted follows. It is probably not complete as information and knowledge has been gathered over many years. If you believe you should be included, let me know and I will gladly acknowledge you. Equally, If you feel you can add further information or wish to contribute to the History Page in any way do, please, contact me.

According to the scoping exercise conducted by Entec for the proposed Winwick Wind farm, archaeological evidence in the Cold Ashby/Winwick area suggests that, in common with other areas in the East Midlands, clearance of forests and farming began during the Neolithic period ( c.4000 - 2000 BCE), although earlier (Mesolithic) flints have been found on Honey Hill.

Crop marks and a trapezoidal enclosure and flints discovered in the parish also suggest occupation and community activity during the Bronze Age. There is believed to be a Bronze Age burial site in the fields North of Stanford Road, opposite the playing field pavilion.

Permanent settlement was probably rare during these periods as farming methods would have meant that areas became less fertile over time, forcing the community to move to another site and begin again, possibly every ten to twenty years.

The Iron Age would have seen a significant increase in population - particularly during the Roman Occupation when many of Northamptonshire’s more permanent small villages, hamlets and farms would have developed and these would have had their own interconnecting pathways and tracks - some of which may be the footpaths featured on this website. There is a Roman farm site on the East side of West Haddon Road at Turnage Spinney.

The place name suffix ‘-by’ is usually associated with Danish settlements but there is also archaeological evidence, in the form of house platforms at the abandoned settlement South of Cold Ashby church and in the field between Church Lane and the West Haddon Road, for Saxon-style buildings - an archaeological survey, resulting from a planning application for development in this area, has recently (2015) taken place.

By the time of the Domesday Survey. Cold Ashby (recorded as the lordship of ‘Essebi’) appears to me to have been a village of 19 households, though Round & About Cold Ashby suggests a ‘recorded population of 18’. These figures are somewhat complicated by the apparent inclusion of the 'lost' settlement of Chilcotes in the assessment for Cold Ashby.

Whatever the true figure, Cold Ashby was clearly a functioning agricultural community well before the Conquest. It is probable that the landscape would have featured large open fields where arable farming was practised in furlong strips on the higher ground, leaving the lower areas as meadow. The resulting ‘ridge and furrow’ can still be observed to the North-East of the modern settlement.

This system may well have been used around Cold Ashby for about eight centuries until the enclosures (which appears to have been c. 1625 but may well have begun a couple of centuries earlier) when foreign demand for English wool began to make sheep farming more profitable for landlords than dwindling tenancies in open fields.

It appears that from circa 12th century to the reign of Henry VIII a parallel system to the manorial was operated by the Cistercians of Pipewell Abbey - for more details please visit the Cold Ashby Grange page.

After Henry VIII’s Dissolution of the Monasteries, lands in Cold Ashby, which Domesday tells us were owned by the monks of Coventry and which later passed to Pipewell Abbey, were granted to various individual landlords, thus giving ‘private ownership’ the power to effect further enclosures, a process which continued through the eighteenth and nineteenth centuries and which so dramatically changed the character of Cold Ashby’s landscape.

​Thanks for your interest.

More of Cold AShby's History is on the main History Page.