Jean and Taffy (above) were inseparable from the day she took him home in the summer of 1997 and when the family moved to Dubai and then on to Hong Kong, Taffy went too. Coming back to Britain was more of a problem - but Jean solved it by living in France with Taffy for six months to avoid quarantine.

Jean is a talented artist and there are many lovely portraits of Taffy among her work.

Hammer was named after Douglas's favourite football team and was something of a sports fan himself as he took to agility with great enthusiasm - and became a calendar boy when this picture was chosen by the WBCS. 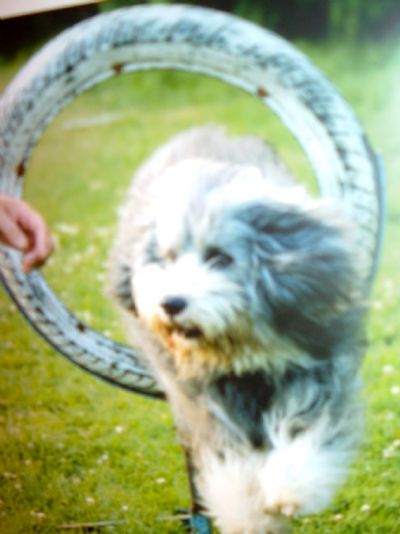 Born in 1998, Hammer was from the last show-bred Brambledale litter and when Douglas brought him to see us a couple of years ago he had a chance to meet his working-bred great nieces.       Douglas is a long-time Brambledale owner, having had his first  in 1973.