Litter sisters Blodyn and Hanner have always been fascinated by gadgets and machines and watch carefully to see how they are used and what they can do. As very small girls they accompanied me when I took the lawn mower to be mended and  spent a couple of hours on the mechanic's workshop floor, watching him intently as he worked.

They are intrigued by my camera, as you can see from their faces in their picture on our Home Page. Earlier this month I tried to use (for the first time) the timer mechanism so as to take a picture of them sharing my armchair with me, which they do in a rather imaginative way. But I couldn't get the setting right and eventually gave up, put the camera away and went to do something more useful. But B+H apparently decided to have a go themselves and I  later found them dancing gleefully round the camera, which lay on its back on the floor, having been not only extracted from its case but also SWITCHED ON.Snatching it up, I checked the memory card to see whether any damage was done.....and found one extra picture on it. 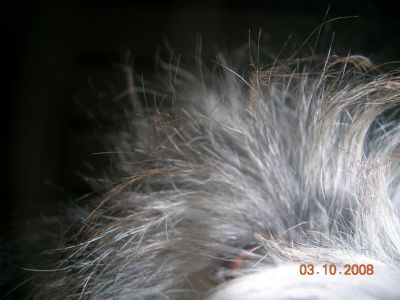 It might not be great photography but as a first effort by an 8month old puppy it's not a bad start!