The Organ at St Swithins ...

is situated in the Chancel and is of very special interest to many visitors.  The true history of this 8-stop chamber organ is, perhaps, a little confused.  It was supposedly built in 1710 by Father Smith for Temple Newsam House near Leeds but this is now disputed. Nevertheless, it was purchased in 1825 by a Mr J. Kendell.  During St Swithins restoration in 1886 the organ was given to the Church by Mr Kendell's son, a Mr D.B. Kendell.  To confirm this, yet partially add to the confusion the brass plaque situated above the music rest on the organ bears the following transcription:-

' This organ was built by Father Smith around the year 1710 for the owners of Temple Newsam near Leeds. It was purchased from the late Marchioness of Hertford by John Kendell of Leeds about the year 1825 and presented to the church of St Swithin Sproatley on its restoration A.D. 1886 by his son Daniel Burton Kendell M.B. CANTAB Patron.  Laus Deo. (Praise be to God)'

As more of the organ's history is eventually uncovered it will be updated here.

Recently the organ was extensively overhauled and it still sounds magnificent in a 'small church' sort of way. It's constant preservation is vital, indeed it is one of the main 'treasures' of St Swithins Sproatley as well as being important in its own right.

One-half of the choir pews, those to the left when facing the Altar, are back-to-back with the seating position of the organist - although the original 'rear-view mirror', which was situated just above head height on the organ so that the organist could 'keep an eye' on the choir and aisle processions and other events across the Chancel, is no longer there. The organ still retains its twin, extending brass candle holders although the electric-powered (brass) 'picture-light' provides the illumination of the sheet music and organ console these days.

Originally 'hand-pumping' - usually by a choir boy - was required to operate the bellows which generated the wind to 'drive' this pipe-organ. If the pumping stopped - then the organ fell silent. A conversion to an electric motor to drive the bellows was carried out sometime during the late 1950's and early 1960's.

The organ's rather grand looking single manual has gained the fond reputation for being the 'liquorice-allsort' keyboard, although the paralleled foot pedals are just plain wood in comparison. These foot pedals are quite awkward to play even for an accomplished organist.  Without any 'return-action' padding they are very 'clunky' and noisy to play, although it is possible to have the foot pedals 'coupled' to the single keyboard to overcome this. The organ's operating pipe range extends from 16' to 1'.

To the organists right is the altar and to the left, if the curtain near to the organ is opened, is a view down the church nave, over the congregational pews, to the main entrance. 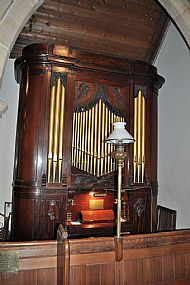 The Organ 1
Viewed from the Choir Pews

The Organ 2
A single 'Liquorice-Allsort' keyboard, plain oak foot pedals (which can be 'coupled' to the keyboard), 'full-open' dual foot pedal and a total of 8 'stops'. 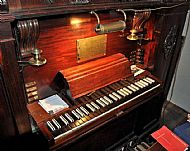 The Organ 3
Note the extending brass candle holders and the brass plate above the music 'rest' which is inscribed with certain information about the organ and its origins. These are now the subject of some debate! 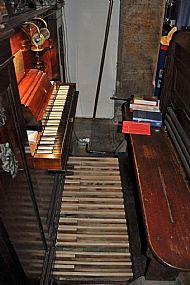 The Organ 4
Side view of the Organ keyboard and foot pedals. Note the hardwood bench - not very 'modern-organist-friendly' during long services!

The Organ 5
Another view of the keyboard console.

Towards the Altar
The Organ, Choir pews and the Altar.

If you wish to purchase full versions of any of the high-resolution pictures shown on this website then you can make contact to do so via the 'Feedback' section (shown in the left-hand column).  All proceeds from picture sales will be forwarded to Church Funds. Otherwise, all pictures are copyright and may not be used without prior written permission.

* Please note that, depending on the speed and quality of your internet connection these pictures may take a little time to download.