Located at the top of Church Lane in Sproatley and standing in a leafy and tranquil setting, St Swithins can be accessed via the old Lych Gate which leads onwards towards to the porch which houses the main entrance to the Church. The support housing for the Lych Gate has walls constructed of brick and stone and its slated roof is supported by large timber beams. It was designed and built in 1899 by John Bilson of Hull to commemorate Queen Victoria's reign. A wooden plaque on the left inside wall of the Lych Gate bears the following inscription:-

'He that is once born, once must die.  To the glory of God and to commemorate the long and glorious reign of Victoria. Queen and Empress. This Lych Gate is erected A.D.1899'

The rear of the Churchyard contains a rock thought to have been deposited during the Ice Age; it was restored and fenced by members of the Sproatley Womens Institute for European Heritage Year in 1975.

The base and part of the shaft of a medieval cross can also be found in the rear of the Churchyard. It is thought possible that the cross may have previously been standing in the south of the village. It is further thought that these remaining pieces from it may have been removed to the nearby rectory-house garden by the 1840s and they are now kept in the churchyard.

The Lych Gate in Church Lane
This 19th century covered gateway leads from the road and up the pathway, through the front churchyard, to the main entrance to the Church.

The Lych Gate
The notice board here bears the spelling of 'Swithun'. The inscribed metal plaque dates the structure. 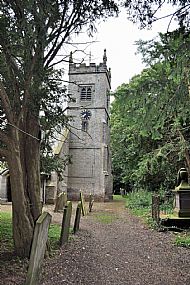 Porch and Entrance
The Porch and Main Entrance to St Swithins

The rear of the Churchyard
Part of the medieval Cross - also the Ice-age rock deposit are to be found here.

If you wish to purchase full versions of any of the high-resolution pictures shown on this website then you can make contact to do so via the 'Feedback' section (shown in the left-hand column).  All proceeds from these picture sales will be forwarded to Church Funds. Otherwise, all pictures are copyright and may not be used without prior written permission.

* Please note that, depending on the speed and quality of your internet connection these pictures may take a little time to download.