There have been Church buildings in the Parish of Laggan since the 6th century, when St Kenneth arrived from Ireland.

The present Kirk was built in 1785. It was the first dressed stone, slated roof church to be built. The Minister at the time was the Rev.James Grant, whose wife was the "Mrs Grant of Laggan", famed for her "Letters from the Mountains". She also published a volume of her poems which included "Highland Laddie" and "The Bluebells of Scotland". 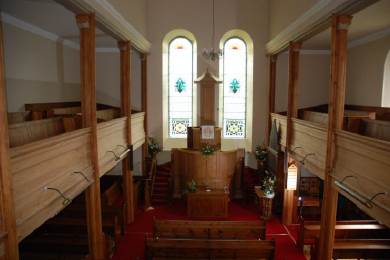 The Kirk, as it is now, was rebuilt and furbished in 1842. The interior has many interesting features. The ten pine pillars which support the roof were felled in local forests and are reputed to be unique. The high Pulpit is also a notable feature. The height of the Pulpit was calculated so that the Minister would neither look up to nor down on the Lairds sitting in the Gallery! Each Laird had his own pew. Cluny, the chief of Clan MacPherson, faced the Minister from the back of the Kirk. The Glentruim MacPhersons’ pew was at the left front. It is interesting to note that the width of the pews in the gallery diminish towards the back, where it was standing room only for the coachmen!

The lower Pulpit is the Precentor's Pulpit, where he would "give out" in gaelic the Psalm and lead off the singing with a tuning fork. The door at the front of the church on the left hand side is the "coffin" door and was only opened for funerals.

The organ was donated in 1911 by Andrew Carnegie who had held the lease of Cluny Castle some years earlier. Local Crofter, Donald MacDonald, recalls pumping the organ in the 1940s and early 50s for his organist mother. It was one of FOUR services he had to attend each Sunday! In 1985, to commemorate the bi-centenary, a major refurbishment was carried out. The Minister at the time was Rev David Stoddart. David was also the first minister of the linked charge with Newtonmore. The tiles forming the Celtic cross in the entrance porch, were made in Laggan’s Caoldair Pottery. The remains of two buildings can be found in the grounds, one of which was the Ferryman’s. He had to toll the Kirk bell as part of his duties.

In 2011, the Laggan Heritage Group completed a survey of the four burial grounds in Laggan parish: