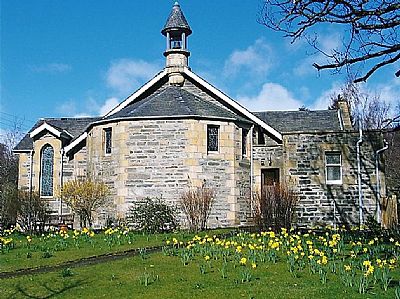 Regular services at Newtonmore and Kingussie

The St Bride’s church building is little more than a century old, but since then has seen significant changes of denomination and of physical form. But the history of the Church in Newtonmore is far richer than that of one building. 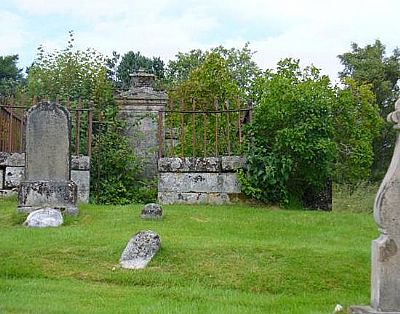 As with many parts of the Central Highlands, Badenoch has strong connections to the Celtic Church, with links to St Columba (in Kingussie), St Eunan (Insh Parish Church, still on the same site), St  Michael (Laggan), St Kenneth (Kinlochlaggan) and St Bride (Newtonmore).

The graveyard still in use in Newtonmore is dedicated to St Bride (Ladh gu Cladh Brighde) .

Some archaeologists consider that the site of the 6th Century chapel is within the graveyard, and has been re-used for the burial of a later gentry family—the Macphersons of Benchar. 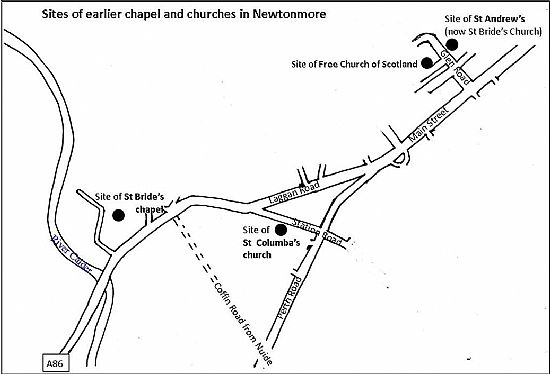 By the 1300s, church responsibilities were organised by means of parishes, and in Badenoch these parishes were part of the territorial bishopric of Moray. Under this structure the chapel of St Bride became part of the Parish of Kingussie with the chapel of St Columba becoming the parish church.

However, the needs of a widely scattered population in the parish meant that the other chapels continued in use, probably both as places of worship and burial grounds.

Within the parish at that period there were at least 5 subsidiary chapels serving the tenants, sub-tenants and cottars of the individual secular land-holdings, known at that time as davochs, but which almost exactly match the landed estates of today.

On the other side of the River Spey, which was not bridged until 1765, there was a chapel at Nuide, whose dedication is not known, and one at Invertromie dedicated to St Colman . Both of these are close to the position of the ferry crossings of the Spey, and it is possible that they were used for worship and burials when the river could not be safely crossed.

This scenario is supported by the fact that there still remains a coffin road from the ferry at Nuide to the chapel of St Bride. 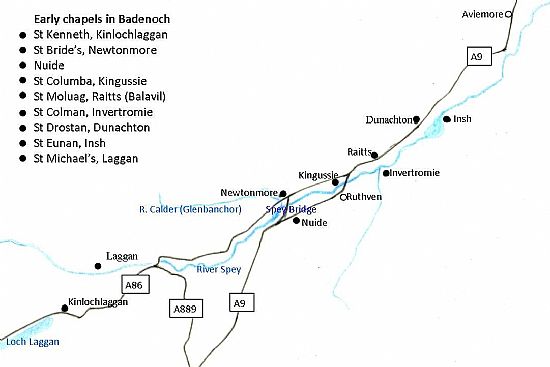 After the Reformation in the sixteenth century, the use of these chapels as places of worship was discouraged, if not completely stopped, but they still provided burial grounds until recent times, with the St Bride’s site remaining the present day cemetery for Newtonmore.

After the bridging of the Spey at Ralia in 1765, new planned villages were developed at Kingussie, Newtonmore and Lynchat (Balavil) - the sites of the 3 chapels on the north side of the Spey. The new Kingussie quickly replaced the medieval Burgh of Ruthven, as the secular capital of Badenoch, and remained the home of the Parish Church. 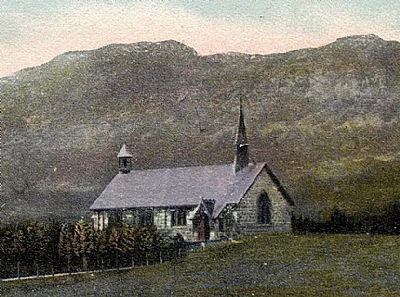 During the nineteenth century, the old farming townships of Glenbanchor were cleared to make way for sheep-farming, and the people moved down to the new “town” on the Moor of Clune – Newtonmore.

The coming of the railway in 1865 led to villages like Newtonmore and Kingussie becoming centres of tourism, and the population grew. By the end of the 19th century, the Parish Church of St Columba in Kingussie arranged to have a mission church of the same name built in Station Road, Newtonmore. (See excerpt below) 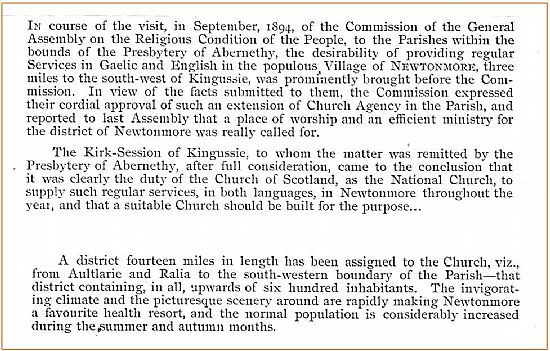 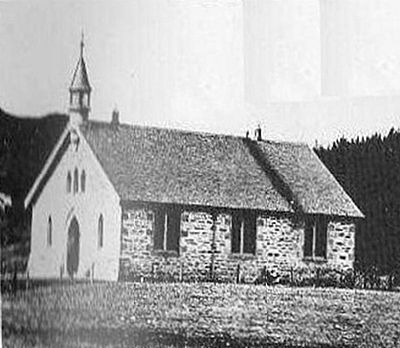 It was a place of worship, but control still remained with the minister and kirk session of the mother church in Kingussie.

A couple of years later, the United Free Church in Kingussie, known as St Andrew’s, did the same, and the Free Church of Scotland established a “tin tabernacle” – a corrugated iron kit building – just a few metres away from St Andrew’s mission church.

In 1937, following the earlier union of the two above mentioned branches of the Presbyterian Church, Newtonmore was decreed a Quoad Sacra Parish of the Church of Scotland, with the existing mission churches in Newtonmore becoming St Columba’s and St Andrew’s Churches of Scotland served by one minister and Kirk Session, and used alternately for worship.

An extract from the Deed of Constitution is shown below: 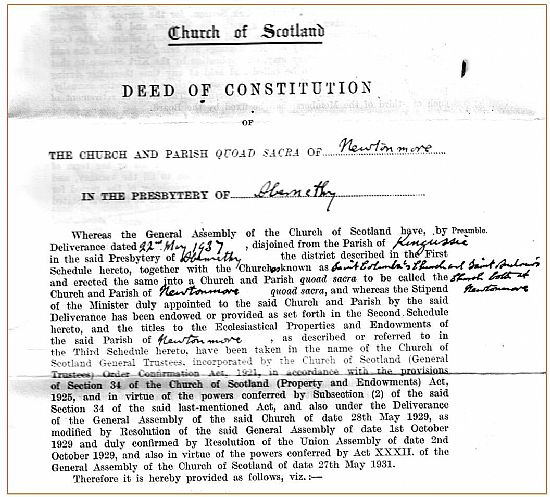 This arrangement continued for almost twenty years, with the Newtonmore congregation responsible for two church buildings.

An insight into the issues which that arrangement caused for a rural congregation, living in one of the coldest parishes in Britain, can be seen in the undated, but probably late 1940s or early 1950s, list of duties for the beadle (church officer). 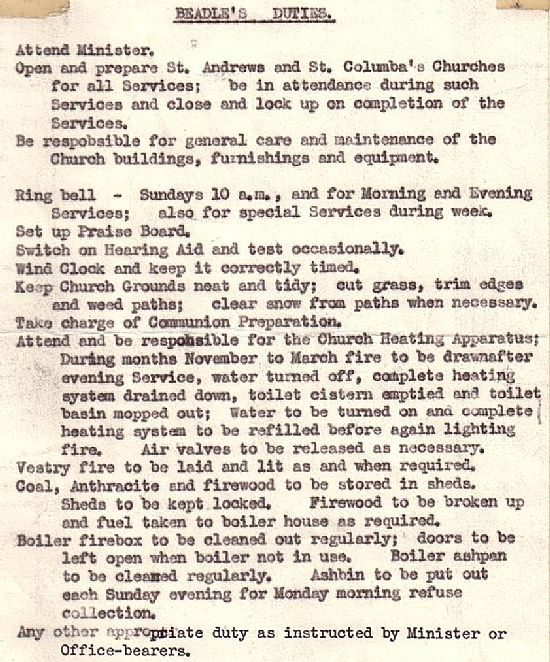 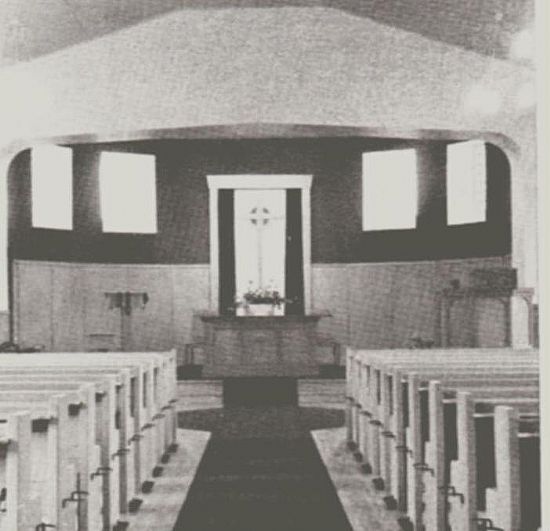 In 1955, a decision was taken to have only one place of worship, and after much discussion it was decided to create a new church, on the site of the existing St Andrew’s in the centre of the village.

St Columba’s was demolished and the resulting stone used to reshape St Andrew’s in such a way that a seemingly new church was created and opened in 1958.

Stained glass windows, memorial plaques, etc. from both earlier churches were reused in the new building, which was named St. Bride’s because of the historical connection  The bell from St Columba’s, dating back to 1895, still rings to this day, although now controlled electrically.

The new church now had its main entrance on Glen Road.  It was a very bright building with plain glass windows in the chancel and a central aisle with a carpet.

Since 1937 the parish has been served by nine ministers:

In 1975, St Bride’s was linked to its sister church in Laggan, six miles away. Five of the nine ministers have served the linked charge. 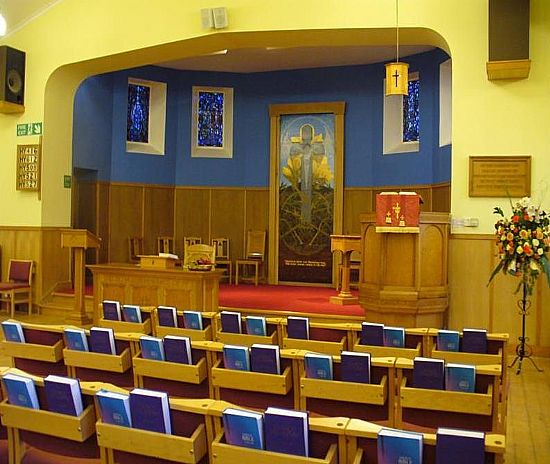 Leading up to that milestone, the church had a major refurbishment, with the pews replaced by chairs and the central aisle carpet removed, thus allowing versatility in the arrangement of the chairs. Windows were double-glazed, a more efficient heating system installed, and a digital audio-visual system provides hymns and other elements of congregational participation on a screen.

In 2018 the Laggan Parish church and St Bride's church became a united congregation called Laggan and Newtonmore Church of Scotland.

As explained earlier, a stained glass window,  previously in St Columba’s, was transferred to St Bride’s .It can be seen in the South Transept. It is on the theme of “Charity”, and is in memory of Lydia Julia Brewster Macpherson, who was the wife of the grandson of James Macpherson of “Ossian” fame. She was deeply religious, and was a significant influence on a leading English Victorian philanthropist – Georgina Cowper-Temple - hence the theme of the window. The Macpherson of Balavil family were feudal superiors of Newtonmore and, as a widow, Lydia Julia lived in the Dower House in the village until her death in 1912.

Four windows were later added to the chancel. They are in memory of Alfred McDowell Bayvel who died in 1963. Each relates to an aspect of the gospel story: 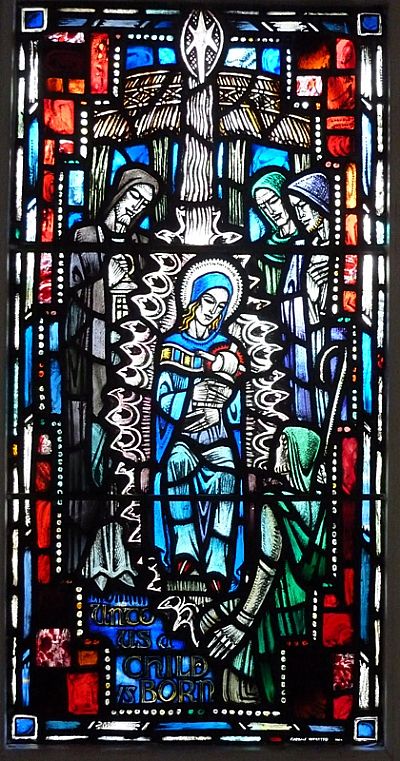 Jesus as a teacher “with  authority” 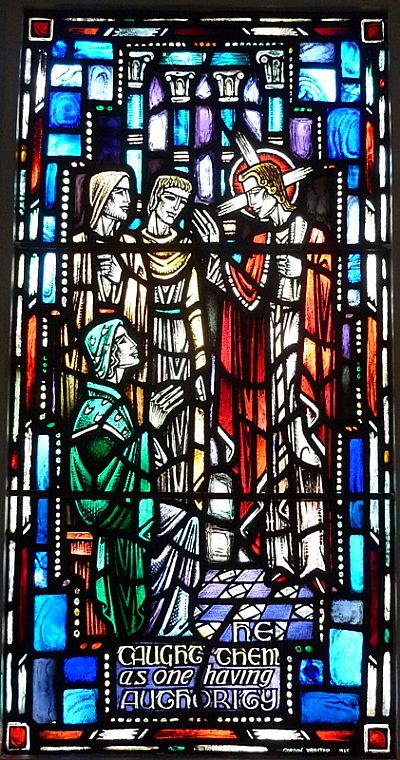 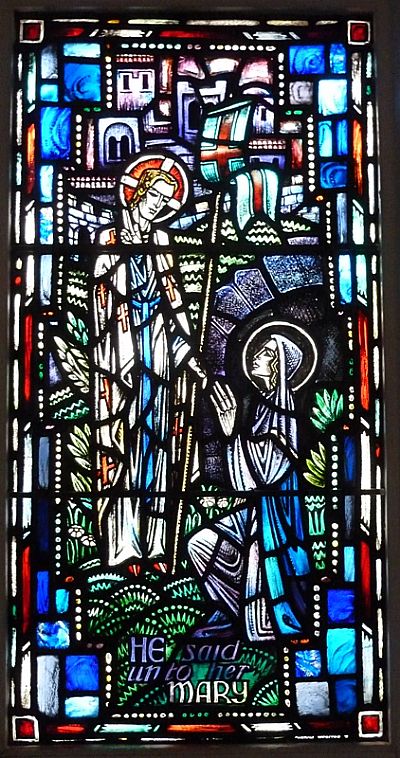 The Resurrection, as Jesus speaks to Mary in the garden 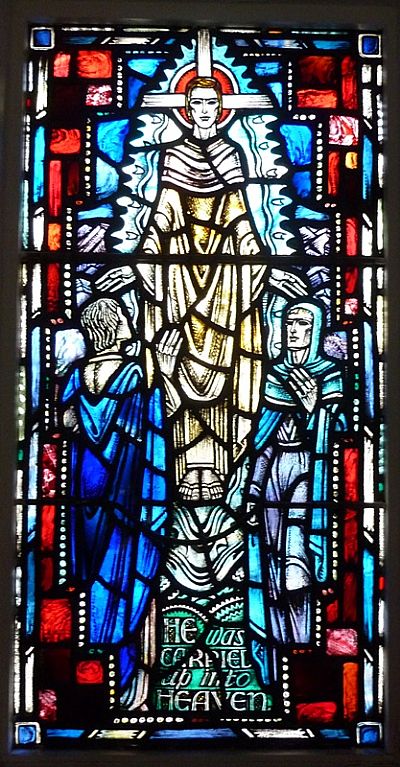 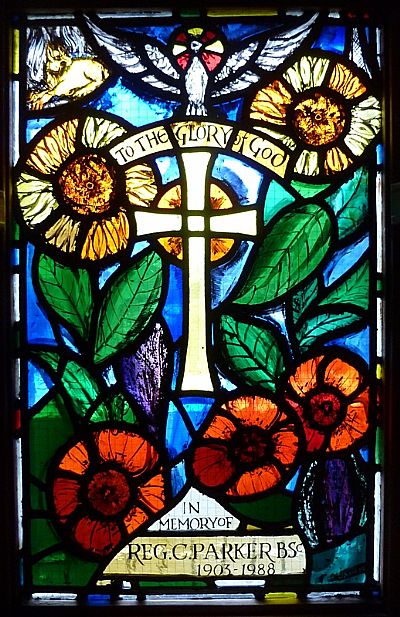 Two further stained glass windows were later added to St Bride’s, this time in the vestibule of the main entrance to the church.

They are in memory of Reg C Parker, a former treasurer of St Brides, who died in 1988, and his widow, Isobel MacKay Parker, long-time organist at St Bride’s who died in 1990. 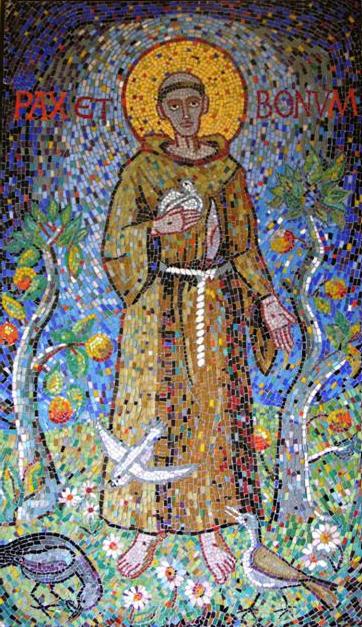 In the South Transept of the church is a mosaic of St Francis of Assisi and his birds. It was created by James B. Selbie, and was presented to the church in 1985 by his widow, Filomena.

The artist was a graduate of Gray’s School of Art in Aberdeen, his home city. He was a former Head of Art at Inverness Royal Academy as well as a practising artist.

In 2012, a member of the congregation (also a graduate of Gray’s School of Art) gave the church a painting for the chancel.  The Cross Stands Empty to the Sky (version 2) was designed and painted specifically for St Bride’s Church by Jean Noble. It was inspired by the Christian hope of life beyond death as expressed in the first two lines of Brian Wren’s hymn:

The cross stands empty to the sky.’

The symbolism is complex, multi-layered and, no doubt, will be read differently by different people on different occasions. Here are some suggestions provided by the artist:

“The painting features a cross, with highly intricate Celtic patterns, illuminated in part to suggest that the cross stands empty yet the light of Christ’s presence remains.

The backdrop is a highly magnified gorse flower symbolising life and hope, while thorns in the lower circle signify pain and decay.

In the upper half, the horizontal bar of the cross disintegrates. It is fragmented by the power of the risen Christ, and shatters into dispersed ‘seeds’ which spread the good news.

Shapes reminiscent of wings (the spirit in motion/ protective ‘angels’) may be found at each end of the cross-bar and in certain petals.

Above the top of the cross and under the arch is a blue trefoil, which echoes the spirals at the centre of the cross-slab, and       represents the Trinity. The deep blue sky and ‘flames’ are very much about cosmic power, the great beyond, and eternity.

The lower circle is, by contrast, about pain and death, about spears and a crown of thorns; about Golgotha, and a tomb from which a stone has been rolled away. However, this circle may be read in two ways: downwards as death and decay, as flower-heads and branches metamorphose to skulls and bones; or, from the bottom upwards, as regeneration or a resurrection of dried bones (Ezekiel 37).

Gorse thorns are simultaneously protective (to the plant) and threatening (to intruders). So, there is a duality in the painting in that some ‘thorns’ may be the new shoots of spring and hope, while  others inflict pain. The highly-magnified thorns structurally support the base of the cross in the painting and even convey an impression of elevating it, reflecting that adversity may bring positive results”.