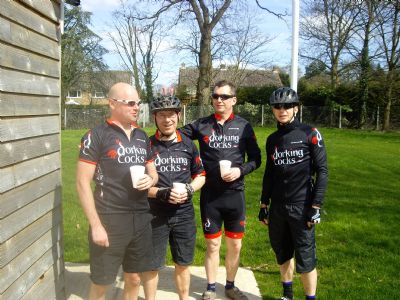 This is the team name we use when taking part in the occasional event. Just to explain a little, as you may or may not know the town motif for Dorking is a Cockerel. There is a nice big Silver one on the Deepdene roundabout and even the towns football team are nicknamed 'The Chicks'. This is because there is a actual breed named 'The Dorking Cockerel' as is explained in the following link

So, this page will be used to show any future results gained in races or other events where we enter a team under this name. Earlier in the year we had a good result coming 19th at the Strathpuffer 24hr race and have had riders finnishing 1st & 2nd (Kiwi Mike & Aussie Matt) in the South Downs Way in a day June Version and another 2nd (Antony) in the July Version. The next event where the team name will appear is Dusk to Dawn at Thetford Forest in early October.

Well, thats was fun. D2D has come and gone and a good night was had by all. We did ok finishing in the 'Team of 4' category 25th out of 70. At one stage we where up to 20th but a little dissapointingly fell back to 25th.

Charlie had our quickest laps despite being on his rigid singlespeed but all did fairly well. George got us off to a good start and we maintained it for the 1st eight hours just slipping down the order towards the end loseing two places on the last lap was a little frustrating. Lap times are all shown below

It was a really good course with plenty of singletrack and in super condition (a little to dry if anything). At about 10 miles long the laps were just about the right length and the odd bomb hole added just a little extra spice to a fun but not technically challangeing circuit.

Must just say thanks to all the organisers for putting on a great event, much appreciated by all who took part I'm sure.

This weekend, March 7th 2010 saw Brian being the 1st person to take part in a race with the new team kit. He entered the Gorrick in the Veteran category where he managed to finish in mid table obscurity, 29th out of about 60 starters. Well done Brian on a good effort.

We entered 2 teams, Toby & George and Simon & Antony. They finished 4th and 5th doing 18 of the 26 checkpoints which to be honest was a little disapointing. Brian entered solo and came 28th whilst Joe came in 32nd along with his partner. It was a good fun event on a beautiful day. It encouraged us do do trails we haven't been on for ages which in itself made a good change and brought out a bit of the compedative spirit which is lacking from our regular rides.

Peaslake in a couple of weeks should see a few of us have another crack at trailquesting with  perhaps slightly differant teams. George will be with Charlie for a start which should make for a fast pairing but we'll see.

George and Charlie entered as a pair and did ok to finish 4th in there category and 21st overall out of the 101 starters. Brian once again went solo and managed 30th overall and 9th in his category so a good effort to all of them. I was unable to attend but will hopefully make itto the next one in September 2010.

This time we had a slightly differant team of George and Toby in the 3hr Male Team category.  After a very dodgy start including losing the punch card, the team recovered well to finally vist all but 3 of the check points and win the team 3hr event.

It was with some trepidation that we set off for Thetford. Our mail pairing had alreday dropped out due to the aweful forecast but the remaining 8 of us (and 2 bit bitches !) opted to give it a go.

We arrived early, set  up camp and had a practice lap. The course was excellent, very fast and flowing and in ok condition. We went round in about 55 mins thinking that race times could perhaps be between 45 and 50 min laps.

On starting the race both Simon and Brian had cracking starts both being in the top 30 or so after the initial 1 mile circuit. However, the whilst on that 1st lap the rain started to come down and boy did it effect the course. By the time the same 2 riders went off on their 2nd laps the course had become a quagmire in places and lap times were virtually doubled.

However, it was the later who came out with a podium place finishing a very respectable 3rd out of the 17 teams that made up the category. The other team came 13th which was a great effort in the conditions 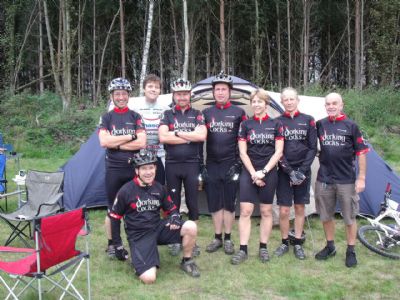 Well that was both fun and hard work. Last time we entered this event was way back in 2004 where we were one of 4 Nirvana/Panasonic teams. Back then we were in the Vets and came a respectable 56 out of 148 teams. This time around we were still in the Vets but with perhaps a slightly stronger team with myself being the only survivor from 2004.

The forecst was bad but to be fair despite the showers for the first few hours it wasn't too bad. Anyway, things progressed nicely and we ended up coming a very creditable 18th out of 123 teams so are very pleased with that - below are our lap times.

We had two pairs in this event, Simon & Paul and Mike & George. Both did ok coming in 35th and 33rd out of the 69 teams present. All agreed it was the best XC course they had ever raced on so thats something for us to look forward to in 2012.

Back on 28th August 4 of our regular riders entered the team event here under the 'Team Milo' name an dcame a really good 17th out of 73 - well done Antony, Ray, Tread & Simon.

Only the 2nd year this event has taken place and George and Toby traveled all the way to Fort William to give it a go. They came in 87th and 92nd out of the 319 competitors so not too bad really

Well, another good race and decent placings for all 3 of our teams.