What’s So Different about Natural Inclusionality?

From Static Box Frames to Dynamic Flow Framing of Reality 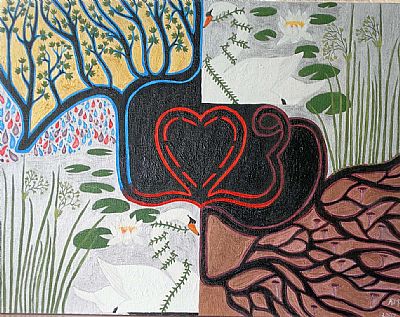 I’m often asked to explain why and how ‘natural inclusionality’ - the philosophy of natural inclusion – is such a radical departure from the abstract philosophies that dominate modern thought.

So, here is my answer:- natural inclusionality resolves the conflict between opposing schools of thought that regard Nature as EITHER 'all one and the same entity' (generally known as 'monism') OR 'a duality of entirely separate material and immaterial existences' (generally known as 'dualism')

It achieves this dynamically by liberating our thinking from the restrictions of rigidly definitive three- or four-dimensional box frames of space and time, into a fluidly evolving continuum of space and energy in receptive-responsive, mutually inclusive relationship. This liberation is accomplished by recognising:-

1. The occurrence of natural void space as a ubiquitous receptive continuum that both permits and induces natural movement.

2. The occurrence of naturally resistive boundaries around material bodies as intrinsically dynamic manifestations of energetic circulation around local centres of space.

To put it another way, material form depends for its very existence on continuous energetic circulation around a gravitational centre of space. When this movement ceases, so too does material existence.

Underlying natural inclusionality is hence the profound but simple realization that whereas space exists naturally as a primary, continuous, intangible ever-presence everywhere, ‘clock-time’ does not. This is because clock-time exists only as an abstract measure of energetic motion – not as the motion itself.

Standard Physics has not as yet recognised this reality and so remains stuck within the definitive mathematical framing that it has imposed upon Nature via the paradoxical exclusion or conflation of space from or with matter. It is hence unable adequately to explain a wide variety of known phenomena, e.g. wave-particle duality and consciousness, while being constrained to invent unknown phenomena in order to satisfy its presuppositions.

The need to move on from the paradoxes of Standard Physics to a new approach that truly does correspond with the reality of natural inclusion is hence vital to our understanding of life, environment and people in the world we actually inhabit, as distinct from the one we construct from imaginary bits and pieces. We can at long last move on from the Newtonian view of Nature as a set of inert whole objects and fragments moved by ineffable external force, to an appreciation of Nature as a fluid continuum of intrinsically dynamic flow-forms in receptive-responsive spatial and energetic relationship with one another and their environmental surroundings. We move on, as it were, from telling stories of 'particles' and 'wholes' as completely definable objects, to an awareness of 'vorticles' and 'holes' in the flow of natural evolutionary processes. An example of this new approach is provided by Amrit Sorli’s ‘Bijective Physics’.