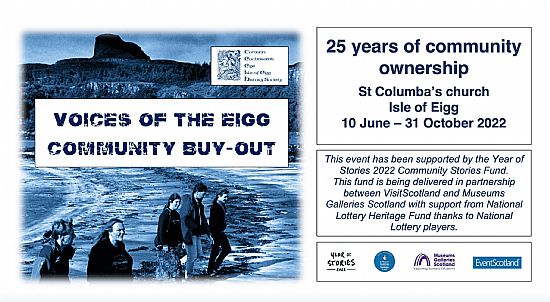 Voices of the Eigg Community Buy out

Comunn Eachdraidh Eige is very proud of being part of Scotland’s Year of Stories 2022, which is a celebration of stories inspired by Scotland. Stories are a vital part of Scotland’s culture and a whole host of events are being held across Scotland this year – by community groups such as ours, museums, culture and heritage organisations and visitor attractions – showcasing Scotland's rich storytelling and literary heritage.

Our Scotland's Year of Stories exhibition is a celebration of the momentous campaign which led to the success of what is Eigg today. It opened on 10 June 2022, the day when the whole community of Eigg celebrated the 25th anniversary of the Eigg buy out, our silver anniversary.... 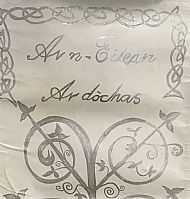 This banner is re-using the thene of the Treee of life and caption" our island , our future" used for the first ever 12 June celebration, in 1997! 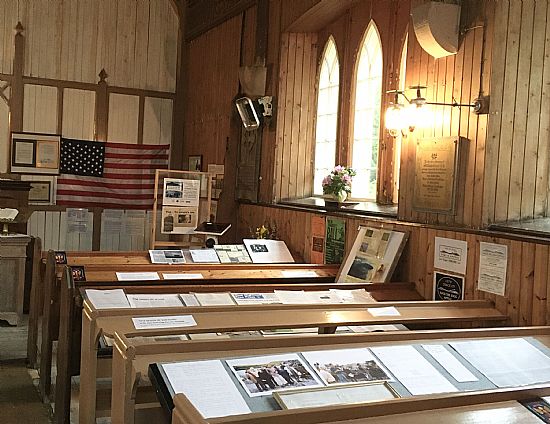 The exhibition uses archive photographs images and artifacts, as well as newspaper cuttings which are part of our extensive Eigg buyout archive. 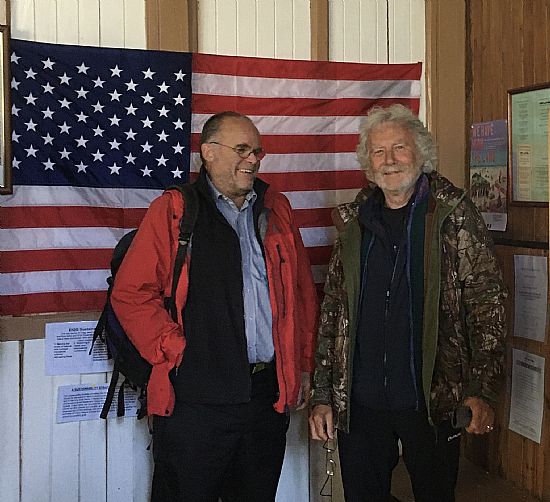 Among our guests for the day, were land reform campaigners Andy Wightman and Dr Michael Foxley whose help was crucial in the sucess of our buy-out campaign.

Like all our visitors to the exhibtion, they were intrigued by the presence of the American flag and impressed to discover it had been flown over the Capitol on 12 June 1997 in honour and recognition of the Eigg comunity buy-out achievement.   The flag was then presented to the isle of Eigg residents by Bob Giles, a descendant of Eigg emigrants in the late 18th century, who had organised for this to happen through petitioning his senator. Bob and his wife had also contributed to the campaign by organising fundrasing events in their home city of Detroit! 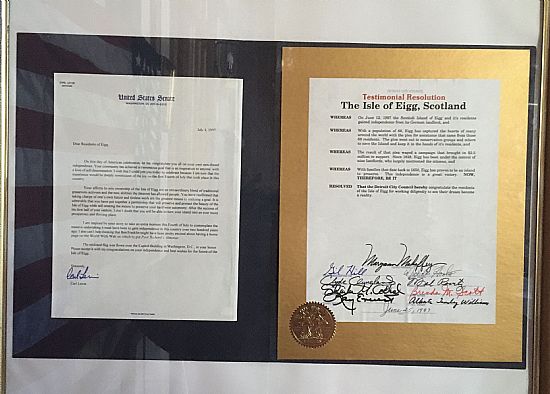 A film show of newsreels spanning the campaign (1994-7) was shown on Tuesday 16 August in St Columba's church and was very well attended. Documentary footage took many of us right back to those times and stimulated lively discussion about the events that took place during the campaign and the people who played a crucial in making it a success! 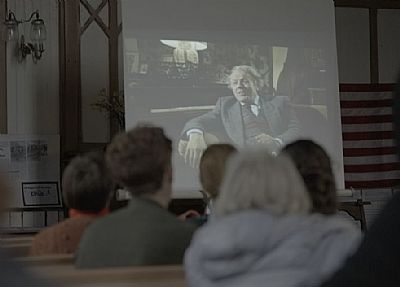 As we progressed in our project, it became obvious that as memories of the buyout are receding in the past, the timeline of events was becoming blurred. It became part of the project to establish an accurate timeline. Using discussion with those that lived through these events and archive material, 3 timelines were created which you can explore in details in the following links: 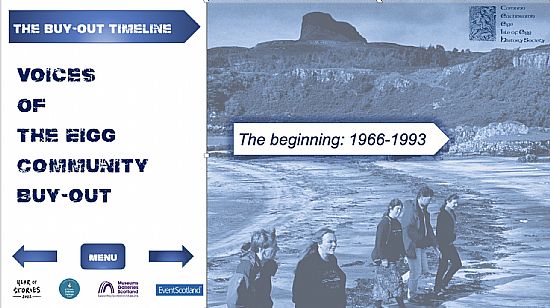 Our comments book has been filled with enthusiastic feedback from islanders and visitors who visited the exhibition. Folks have been truly moved by our story and have wriiten their appreciation of this opportunity to discover our empowerment journey through our exhibition. 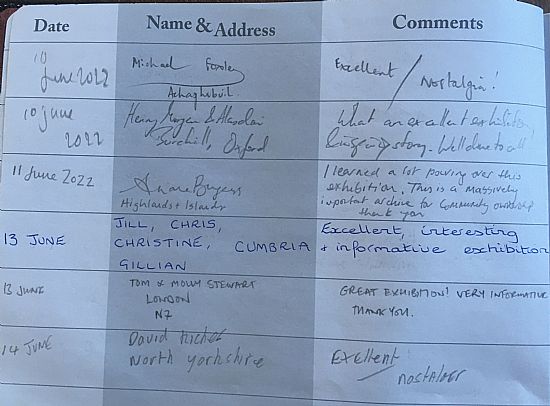 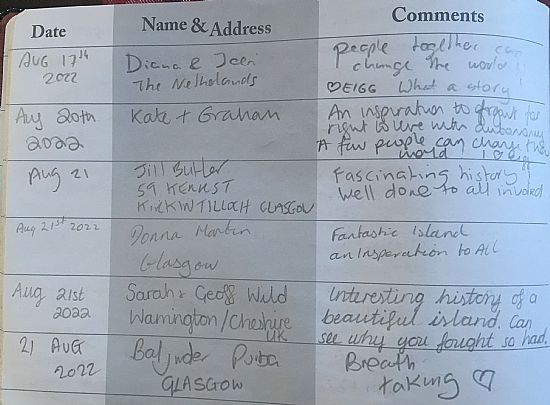 We have also developed an app which you can download to help you discover more about the Eigg Community buyout as you visit the the island and understand what a diffference it has made to the islanders' lives. 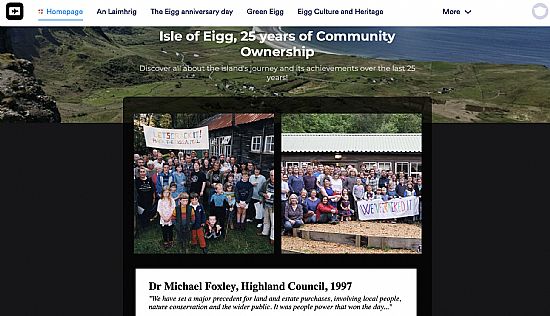 Just scan the QR code below to download the app on your mobile phone home screen. "The Power of the Eigg Story, yesterday and today" 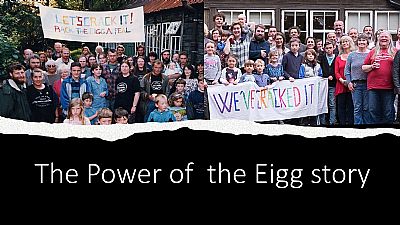 Our webinar with authors Alastair McIntosh, Lesley Riddoch and Andy Wightman on 2nd November was really well attended with 109 people registered. The event was introduced by former Labour MP Calum MacDonald, who 25 years ago asked for a land register and public interest test for buyouts, now proposed in the latest Scottish Government's consultation on land reform!  We have recorded the event and made it available as a podcast. 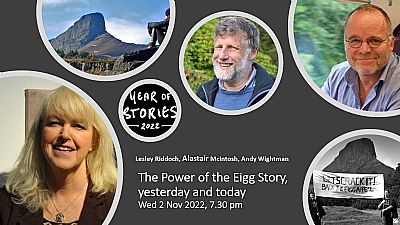 You can listen to the podcast here!

The podcast includes an hommage to Dr Andy Samuel who recorded his thoughts on the need for Heritage Rights to be enshrined in the right to buy legislation, as part of our Voices project.  Dr Samuel who tragically died this summer was a great friend of Eigg and its buyout.  Here is more about him:

• In January 1997, the year of the Eigg buyout, Dr Andy Samuel took up his post as lecturer at the University of Abertay Dundee, where he remained for the rest of his career.  He became known for his adventurous field trips, passionate lectures and utter dedication to helping people understand Scotland's land and culture. He followed the story of Eigg with much interest, but it is for his work on the isle of Rum, with its journey from nature reserve to partial community-buyout that he is best remembered.

•Andy's work on Rum was wide-ranging and revolved around his well-researched belief that nature and culture were not separate entities but should be understood as integrated elements of how people understand, experience and value land, and in turn feel able to develop their communities and participate in land management decisions without having their own lay knowledge and experience subordinated to scientific knowledge.

•Latterly, he particularly focused on Heritage Rights for Indigenous People and felt that land reform legislation needs to recognise Scottish communities’ Heritage Rights to become truly transformative. We were able to record his thoughts on this topic and the recording is now part of our Voices archive that you can listen to. 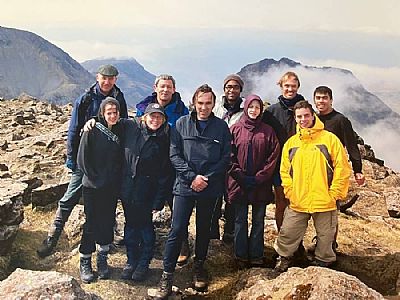 Andy Samuel (middle), surrounded by a group of students on Rum

Click here to follow our event at the Voices of the Community      Buyout Facebook page. We will continue to upload new  archive material, so keep visiting!