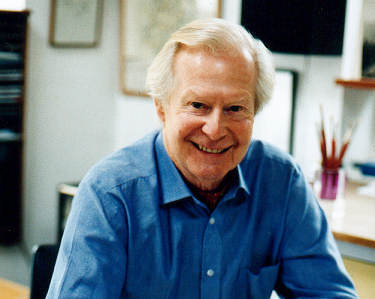 Vision On was a British children's television programme designed specifically for deaf children.

Tony was an English artist and children's television presenter. He started off as an officer in a Gurkha regiment but became famous for being a children's presenter and artist on television shows such as Vision On, Playbox, Take Hart and Hartbeat, often accompanied by Morph. He also created the Blue Peter ship logo.

Speaking to the BBC in 1996, Tony said: "I hope I've achieved the sort of programme that entertains first, and maybe surprises, informs, and amuses, and that people don't just forget that but in the backs of their minds think "perhaps I'll have a go at that one day"

Tony Hart's television career spanned 50 years. He was involved with a number of charity auction events each year, made regular guest appearances on TV and Radio and gave a lot of his time helping various children's charities. In 1984 his BBC programme, "Take Hart", won a BAFTA (British Oscar) and Tony himself received a 'Lifetime Achievement' award in 1998.

The Vision On attraction

Tony Hart rose to international fame with 'Vision On'. It ran for over ten years and spawned a myriad of talent that is still with us today.

Many of its contributors and viewers went on to become film makers, performers and artists in their own right - in fact nothing has surpassed 'Vision On' for such a wealth of talent and brilliant ideas in a 25 minute format, and perhaps more importantly it was the only series ever to attract audiences of both hearing and non-hearing viewers (for which it was intended)..

"Vision On" ran here in the UK from 1964 to 1976 on BBC 1 (after taking over from "For Deaf Children") usually on Weds or Thurs around 4.00pm on British Television. Made at BBC Bristol, it was broadcast in many other countries throughout the world.

And now another version of Vision On

Just like Tony Hart, Mike Davies on this 'Vision On' website hopes to entertain, surprise, inform and amuse viewers, giving them as much pleasure as he had creating the videos.

You may be interested in visiting Tony Hart's official website from which the above extracts have been taken to highlight his achievements:
http://www.tonyhart.co.uk/