This page contains Links to other Pages,
each of which has a Link at the bottom to return you to this Page.

A Church was built on this spot probably before the Norman Conquest.  It was probably a wooden building, which, over time, needed too much repair & maintenance, so a new Church, of stone, was built in the 14th Centruy (for more, click here).

Around that time, there were also "Dissenters" in the village, and two Chapels were built, one along Lower Street, and one in Back Lane.  Both fell out of use as the villagers stopped  attending, and stopped supporting them financially; both have now been converted into residential homes.

The process of "change" in the building is one that recurs from time to time, so building work has been carried out on, and in, this building as it became necessary or desirable, and as funds becam available.

In the mid-1860s the roof was in danger of falling in, and a  total re-build was carried out.

But this is but one Church of the many Church of England structures all over the country - and beyond.  This Church falls in the Diocese of Salisbury, and ANY "structural" work requires permission from "The Diocese"; this permission is called a "faculty", and the process is quite long and detailed - like obtaining Planning Permission to do work on your house - only much stricter.  The legislation can be found here.  As this Church, like a great many others, is Listed, then any "serious" work also has to comply with the "Listed Building Consent" process, the Building Regulations Approval process, and possibly the Planning Permission process as well.

The Church as it stood at the turn of the 21st Century had fixed pews, seating about 200 people.  Congregationss had fallen to about 25, though with considerably more at Remembrance Day, at Christmas, and at some baptisms, weddings and funerals.  What happened to our Chapels is a stark reminder of the Church's need for support.

It was found that some of the floor boards, and the pews above, were damp and rotting.  There was also some dissatisfaction among the congregation and the Parochial Church Council (the PCC) about some other aspects of the building.

A review took place and proposals were made to the Diocese.  The response was that the suggested improvements did not go nearly far enough, and suggestions were made as to what would be preferable.

This was a lengthy process, which included a "Public Meeting" in the Church, as advertised on Page 4 of the June 2016 issue of The Fippenny News -

Eventually a firm application was made, and a faculty was eventually granted, with support from the Bishop of Salisbury, in whose Diocese the village lies; his letter was published in the August 2020 issue of The Fippenny News, which also carried an explanatory letter from the Rector and another from the Churchwarden.  The work started during "Lockdown" in the summer of 2020, and the pews were removed in early August, revealing that there was quite a bit of "making good" required to wood-rot to the existing timber floor under the pews - 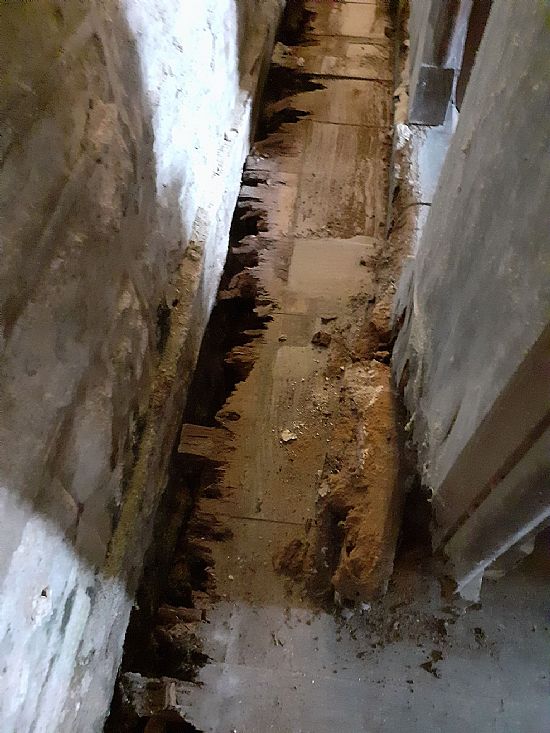 - so they would at some stage have had to have been dismantled and removed anyway; there is more information here.  The Church was a "construction Site" and so out-of-bounds - but closed anyway due to COVID19.

There were two un-publicised Sevices in the Church on 29th August - a wedding and a baptism, but both with VERY small, self-distancing, congregations.

It is planned that the Church will re-open for a Service on the 20th September 2020.

Return to the History Page