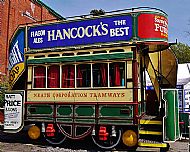 IT was the way to travel around Neath in the early 20th century — and now the history of the town's Gas Tram is set to gain international importance, thanks to a German enthusiast and town historians.

Neath Antiquarian Society was contacted by Dietmar Höse from the Saxony town of Dessau, famous for having the world's first gas trams, and for its college of architecture known as Bauhaus.

He was after information or photographs relating to the gas trams which operated in the town from 1897 to 1920 — and was delighted to hear that the only remaining gas tram in the world had been lovingly restored and was proudly on display at Cefn Coed Colliery Museum. (see menu)

Herr Höse, who works as an engineer for the German railway company of Deutsche Bahn in a factory that repairs electric locomotives, is an historian and model railway enthusiast in his spare time.

While at college in 1984 he became interested in gas trams and was part of a working group that produced a booklet on the subject for the Museum of Urban History at Dessau.

Further to this, he collaborated with two other authors to publish a lavish book that chronicles 120 years of their tramway system.

This larger work inspired him to expand his research of gas trams internationally and this naturally led him to enquire of what had existed at Neath.

Through contacts made world-wide Dietmar Höse is amazed that how much material that was previously unknown to him has come to light, the outcome of which will be the first attempt to comprehensively chronicle the subject in the global sense.

"We were delighted to have had the opportunity to provide Herr Höse with a number of photographs and historical details for inclusion in a book that he will shortly publish" said Keith Tucker, editor and trustee of the Neath Antiquarian Society.

"What would have otherwise have been just a mention of Neath in the book, will now be a chapter of significant length."

Unlike Swansea, where they opted for an electric system when they modernised the horse drawn trams, Neath Corporation decided on gas power using compressed town gas stored on-board in cylinders. The gas then drove an engine or gas motor to propel the tram along the rails.

The Neath gas tram operated from Briton Ferry, where it terminated near Villiers Street. It travelled through the town of Neath and west to Skewen ending at St John's Terrace.

But competition from the motor bus heralded the end of the Neath trams in 1920, with the cars being sold to other UK operators or scrapped.

Few people realised the significance when, in 1984, the remains of a Neath gas tram was discovered being used as a garage.

The result was an extensive two year reconstruction project, the result of which can be seen exhibited at the Cefn Coed Colliery Museum. Significantly, this is the only remaining example of a gas tram in the world.

Other facts about the Neath tram have become apparent through correspondence with Herr Höse that make it even more significant, said Mr Tucker.

"The method of fuelling the tram with gas by utilising a form of 'hydrant' set with cover flaps below the roadway was unique, as elsewhere it was done by overhead hose," he said.

"Again, one of the photos we have was taken in Briton Ferry about 1898 and is, according Herr Höse, the only image in existence that records the laying of gas tram tracks in the world".

"About 84 per cent of the city of Dessau was destroyed during World War 2 and there is no evidence or records of the gas tram system that existed there.

"Here, at Neath we can trace the layout over which the trams ran more than 100 years later.

"The Neath Antiquarian Society is proud of its promotion of local historical heritage.

"Dessau may have had the first gas tram, but Neath has the last."