Please go to the new 2018 updated website of the whole book at http://www.islandofavalon.com/

These topics initially seem to be so disparate and unconnected, that any relation between them appears scant and impossible to establish with any degree of certainty. However, it is the aim of this enquiry to show how inextricably linked these diverse questions are. This  site will show how the many pieces of a puzzle that have hitherto been unconnected, hidden, deliberately obscured, ignored, misunderstood, or even inadvertently lost over time..... can be resolved into one conclusive body of evidence.
The unconventional reading on this web site is heavy going and there is sometimes a need to repeat information already known to some readers, which to others is necessary for a step by step orderly account which leads to a revelation that will astound even the casual reader.
Whatever the readers background or discipline, or by whatever chance you have been prompted to read this information, this examination of diverse material, seemingly unconnected, actually disentangles a few mysteries and makes discoveries that will have global ramifications.
There are many references to old texts, but where the pre-comceptions of modern scholastic endeavour has previously failed to piece together evidence, we hope that the reader will be convinced by the connections made in this exposé.

The Saint Michael Ley line is the line that Melkin the Prophet is saying should be bifurcated at Avebury (within the stone circle SPERULIS). 104 nautical miles at an angle of 13 degrees(SPERULATIS), one will find the Island of Avalon where Joseph of Arimathea is buried. This Island presently known as Burgh Island in Devon was named by Melkin as Avalon and depicted in the Perlesvaus as a tidal Island next to a valley. The confirmation that we have located the resting place of Joseph of Arimathea is found in evidence given by Father William Good who says that 'Joseph is carefully hidden in Montacute'. As one can see, the line Melkin has indicated through his geometrical instructions, (once decoded), goes right through St. Michaels hill Montacute and leads to the Island of Avalon. 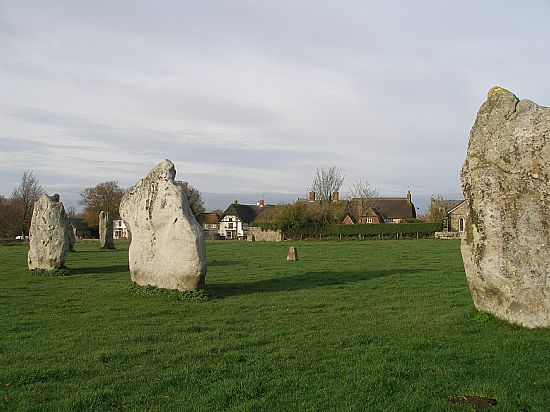 Avebury stone circle within which the St. Michael line and the Joseph line bifurcate as we are instructed by Melkin.

Neolithic sites and the network of St.Michael churches on the saint Michael line.

The St. Michael Ley Line runs from the hill fort near Land’s End called Carn Les Boel to a town on the coast in East Anglia called Hopton on Sea. It keeps a steady rhumb line for 364.50 land miles across southern Britain. Although it is described as a line, many researchers have plotted it and linked up its features by excluding some points along its track and including others, or including all.

We should point out that the essence of the line is Serpentine in nature, although plotted on a map it seems straight. It actually weaves it's way across the countryside. The line is  316.74 Nautical miles long and skirts past several nodal points that have been manufactured, with such surveying precision, by Neolithic man.
It is called the St Michael's Ley Line due to its features that are shown in figure 1.

The point to make here is that it is doubtful that the churches that were built along the line were all dedicated to St. Michael by coincidence.
There are many places which are named after St. Michael that lie exactly upon its axis. Several churches or chapels were built along the line from the early thirteen hundreds onwards, with the St. Michael dedication. However other churches not on the St. Michael ley line have a distinct relationship to this line. We will investigate further, later on, as to why these chapels and churches seemed to have been erected by organized design in such a short period of time. 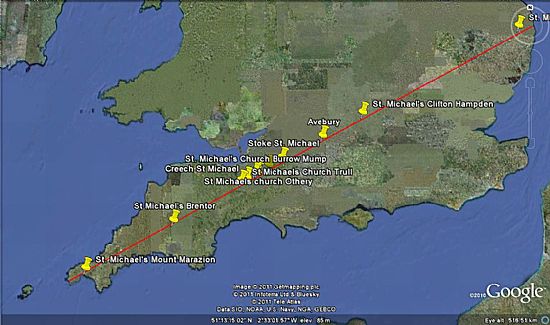 The most fundamental point to make about the St. Michael Ley line is the fact that many of its features, although not dedicated to St. Michael are in fact sacred sites and nodal points from the Neolithic culture which existed in Britain from as far back as 5000 years ago. Assuming that many of the ancient Neolithic sites have had modern era temples such as churches built upon them, it is hard to understand how on this particular line, the preponderance has been to name them after St. Michael.

The probability that so many sites occur by coincidence having the St. Michael name in one alignment are small. We must  assume that it is by design and we will discover why and by whom these churches were built. However, we must assume that the underlying arcane knowledge of what exists on this line, might explain such a modern usurpation by the church builders. The fact that St. Michael dedicated churches were placed on a Neolithic construction should make us investigate other St. Michael churches not normally associated with this Ley Line. If these follow a similar pattern, then one can only assume that whoever put them there must have had some understanding of the original 'raison d'être' of the line (or the features on it) that were constructed by Neolithic man. How this Neolithic line was recognised or the knowledge of its existence permeated down from the Neolithic culture to the thirteen hundreds is uncertain. Has this knowledge of function of the original Neolithic construction been lost since the St. Michael churches were built? 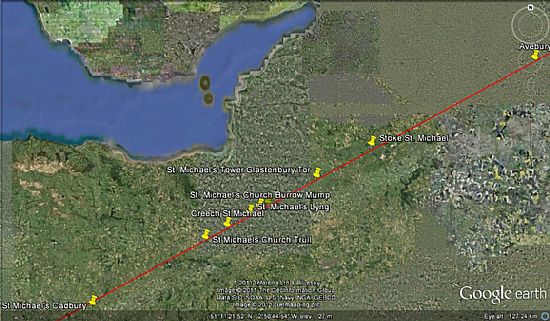 People react and sense the forces of nature that interact with their daily lives in different ways and on different levels. In the book the ‘Sun and the Serpent’, Hamish Miller and Paul Broadhurst investigated the entire St. Michael's Ley Line, plotting its interwoven energy course, as it criss-crosses the rhumb line. They did so by dowsing, but many skeptics feel that there is no substance to this form of enquiry and dismiss the use of this technique.

However, we shall see shortly, that this line exists and is no figment of the imagination, but who put it there and what is its purpose? Two thousand years ago, a body was entombed within this Ley system, and has lain undiscovered upon the British landscape, much as a Pharaoh would have been laid in a pyramid specially built for him. Two thousand years ago, the same technology as the pyramid builders used was understood in Britain and yet it is not comprehended today. Between 450-750AD a monk lived named Melkin, who knew of the Ley lines existence and left us clues in a Latin riddle that will lead us to the uncovering of this hidden tomb.

Figure 1a Showing Stonehenge, one of the nodal points on the Ley system. 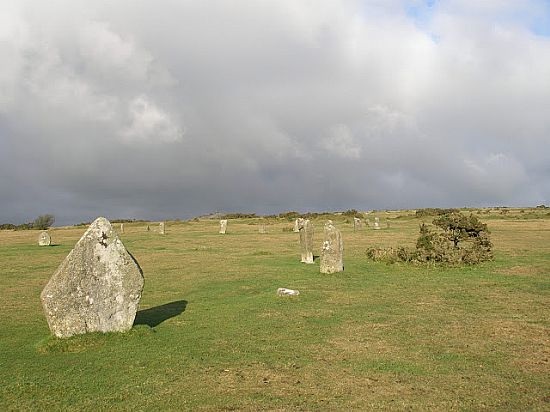 Figure 1b Showing the three stone circles in Cornwall called ‘The Hurlers’ situated on the Neolithic St. Michael Ley line but this site has no monument to St. Michael.

It is interesting to ponder upon the origins or precursor of what could have been a similar system to what has eventually evolved into our present-day Ley system. Just how old, how big and who conceived of the benefits, that this system would afford a Neolithic population. Approximately 6000 years ago with the eventual flooding of the English Channel.... did part of a much older system that employed tors, hills, prominent rock outcrops and islands gradually get submerged. Has the flooding of Lyonesse caused a repair to be made of what was once a single intertwined entity that may have had connections in continental Europe? As we shall see shortly the St. Michael sites that have usurped the Neolithic sites which were part of this much older system are surely aligned. Is this in some way analogous with the ‘Jerusalem that was builded here’ that Blake alludes to in his nationalistic hymn; built by our ancient forefathers, and yet more recently built upon by persons who understood the benefits of its construction? Are the Satanic mills referred to in the hymn, the manmade earthworks, and mumps positioned with a surveyors precision, upon England's green and pleasant land?
It is one of the objectives of this enquiry to elucidate to the reader the interconnectedness of what is potentially part of a huge ancient functioning system and its relevance in the present era. Who was it in the modern era and which organised body realised that some planned out design is still extant on the British landscape? Did the later designers of the 1300s who built on top of the very locations on which ancient man had built his design, know of its function and have knowledge of its effect upon the inhabitants of Britain? 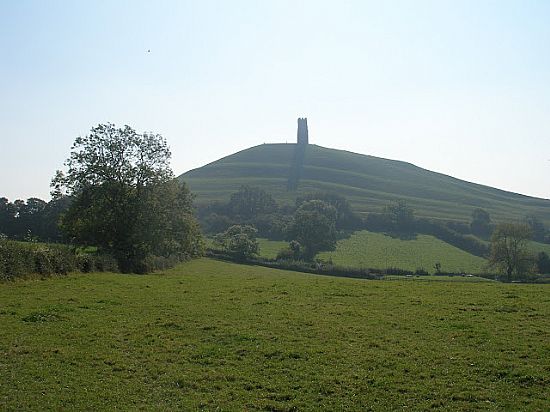 Was the mechanism that ancient man tapped into, still functioning when their locations were taken over by modern church builders? The St. Michael churches which are perched on hilltops, in the western part of England, which were part of an older design, seem to confirm that at least in the 1300’s the Neolithic network was perceived to be still functioning.
As in the construction of many of the beautiful Gothic cathedrals that adorn some of the oldest British cities, a long period of time from start to finish for every one of these endeavours was encountered. Unlike the comparative simple construction of a church, the multitude of skills required over a timespan of around 250 years, brought about the establishment of Masonic societies that built these edifices. These societies understood a body of knowledge that was passed down from generation to generation so that these long periods of construction could be accomplished by applying complex rules and designs that, were beyond the capabilities of any individual.
Stonehenge was created in similar circumstances but over a far longer period of time. It has been relocated and refined over a period of 1500 years, before there was any written word. How then did they convey the knowledge of the geometric theorems, acquired astrological records and the details of a preconceived design, from one generation to the next, over such long periods.
There is a vast interwoven set of megalithic sites from Northern Europe all the way up through Scotland and the Orkney’s. Before the flooding of the English Channel, stretching as far as the body of the now submerged land that extended further than the Scilly Isles, it is possible that this network of Ley Line's that is interwoven upon the British landscape, existed and connected through the now flooded plain of a land known as Lyonesse?
So, to carry out the construction of this huge interconnected network, arcane knowledge of the positioning of heavenly bodies, complex mathematics and surveying techniques were surely known. Not only did this information have to be tabulated but correlated and handed down, before any design could be put into construction.
It is safe to assume that the body of knowledge to accomplish all of these tasks would have been secreted amongst the privileged few, but the Masons who built our cathedrals and the Templars who built an array of St. Michael churches upon old Neolithic sacred sites, understood a body of far older knowledge with intended aims, which we will uncover during this enquiry. To bring to fruition and complete such a project, not only did it need the knowledge and purpose as it did in Neolithic times, but in the 1300’s it also needed the wherewithal.
Before we implicate the Templars of having a hand in the construction of a network of churches in southern England..... (supposedly after they had been dispersed and merged into the Hospitallers), suffice it to say that even with modern day democratic governments often the real power lurks discreetly in the shadows. The Templar’s agenda was evolving and taking place undiscovered behind the front of an organisation that appeared as the Knights of Christ and protectors of the holy city.