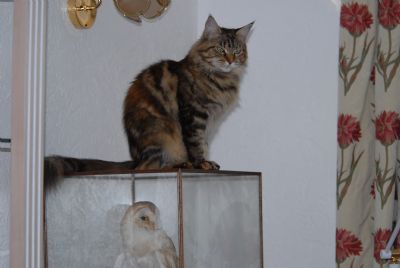 One of her favourite observation posts

I have bred cats most of my life, but not Maine Coons.  I have stewarded at cat shows and am on the North West Cat Club committee.

The cats are owned by myself, (Carol) and my son James who had been wanting a Maine Coon from first seeing them at the cat shows.  I had some friends who bred them who lived not far away so we were waiting for a kitten from them.  Each time they had a litter there were either no girls or none suitable.  Eventually one arrived only to be found to have a problem.  My friend Elaine knowing that Helen and Brenda (Elmcoon Maine Coons) had some kittens took me to see them.  We fell in love with a little tortie tabby girl who eventually came home with us,  we named her Bootlace (Elmcoon Katoushka) and she was our first Maine Coon.  Bootlace is now neutered but is a real character, she catches rabbits and other things for my dogs.  Unfortuately although she had some lovely kittens she only once produced a girl who eventually died so we do not have her lines any more. 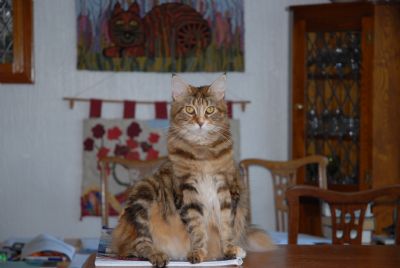 Tinkerbell - Tinks in waiting
Our second Maine Coon was a lovely friendly brown tabby who we called Tabitha but our luck with the breed continued when she was found to have polyps in both ears and despite doing everything we could we lost her.  I hope I don't have to go through such a trauma again.  We tried again, this time another brown tortie tabby girl Tinkerbell (Elmcoon Adelheid) who we took to visit Grand Champion Yaheska Dancinwith Wolves.  She was a brilliant mum and the kittens were lovely.  A silver tortie tabby girl, a silver tabby with white boy and a blue tabby boy.  Their pictures are on the kitten page. 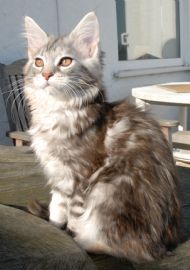 We kept the silver tortie girl, Whisper, who is an absolute joy.