Pump Pool and Triangle Pool (below) are two separate pools which are very similar in nature and which hold the same species and sizes of fish as The Stream with the exception of barbel and chub.

Both are ideal for those who love to fish smaller, more 'natural' waters which look and feel more like good old fashioned farmers' pools. Despite their size, however, Pump and Triangle offer good quality fish and both respond well to pole or waggler. 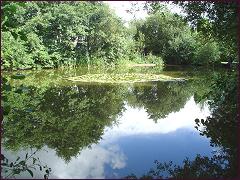 Triangle - smaller and secluded - but good fishBoth pools average about six feet in depth shallowing to three to four feet round the margins and tend to be either 'on' or 'off'. Anglers who fish the pools regularly say you can go there one day and not have a bite - give them a go the following day and you can be hauling out 12lb carp like the one below.

Pump Pool has overhanging alder trees on the bank next to the trout lake and these make a popular haunt for the carp - as do the overhanging willows. There is also a lily bed in the middle which is usually the first place the fish head for when they are hooked. 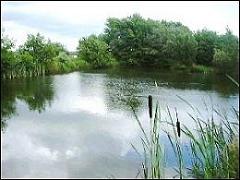 Popular pegs on Triangle Pool are again along the Trout Lake bank where a reed bed forms a popular 'hot spot' and near the overhanging trees which makes an obvious haunt for the carp.

However, as one would expect with small pools, you should be able to attract the fish to your swim wherever you fish and fishing pellets, luncheon meat, sweetcorn, maggots or caster over a nice compact bed of feeder pellets should usually bring the fish around.

In 2005, Angler's Mail correspondent Tony Keeling fished Triangle Pool for a feature and had a bite a cast for four hours - finishing with 40lbs of roach to 1lb and tench to 4lbs. Tony's method was to fish pellets and sweetcorn in the margin with a three-metre pole ... simple fishing but a great result!