This is a Windows program that turns programs written in a simple scripting language into assembly language.  There are editors for sprites, blocks, screen layouts, there is even a script generator allowing the user to get started with some common templates.  The language is considerably more powerful than the Spectrum and CPC versions with WHILE loops, collectable blocks, READ, DATA and much more.  AGD will produce games for the Spectrum, MSX, Amstrad CPC, BBC, Dragon 32/64, Acorn Atom, Enterprise and Timex Sinclair/Next with more machines in the pipeline.  Fancy importing an old game written with AGD 4 and converting it to use Timex graphics on the Next, or perhaps doing an Amstrad conversion?  It's easy with this tool!  Now with support for VZ200 and Acorn Atom 4 colour mode.  The latest update comes with a new improved font editor, complete with 12 fantastic fonts designed by Damien Guard.  MPAGD can do far more than AGD ever could.  You can even build a game for the 16K Spectrum!  The latest version features a new F5 keyboard shortcut, which builds your game then automatically fires up an emulator to test your creations on.  Now comes with an option to export a .tap file.  Features Beepola and third-party assembler code support. 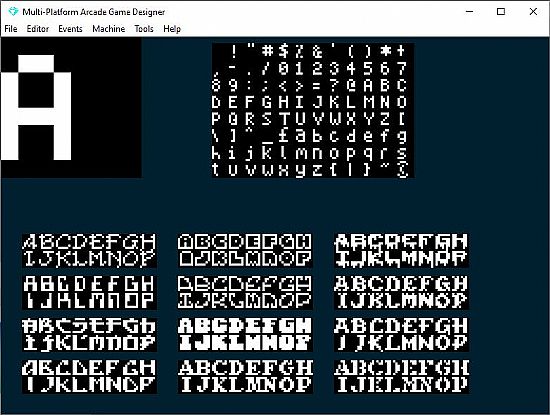 Designed with the Vega+ and Vega in mind, this is another "trademark" game design oddity.  Give it a play and see what you think.  If you liked Coracle, Albatrossity and Battery is not Precluded this might be your next favourite game

Create your own arcade games - platformers, shooters, arcade adventures or whatever.  Games are fast, smooth and work on any Spectrum except the 16K.  Now available as a 48K ZX Spectrum ROM giving you the entire Spectrum RAM to play with, not to mention custom keyboard routines that make it possible to type quickly.

A special customised version of AGD for the SPECTRA interface which has been designed to take advantage of the extra colours.  Functionality is as AGD 2.7 with a few of the improvements which were added to later versions.

Travel around the galaxy, visiting dozens of planets and researching new lifeforms for the great tome.  Visit long-dead alien civilisations, loot tombs, explore vast oceans and much much more.

Fast and frantic action set in the kitchens at Byte Back.  Graphics courtesy of Craig Stevenson, music by Yerzmyey.

Battery is not Precluded

A game where you compete against yourself.  Force your clones to collide with each other to become the last man standing.  Music by Yerzmyey.

How to Write Spectrum Games

This is the latest version of my guide which explains how to write Spectrum games although it does assume the reader has some knowledge of assembly basics beforehand.  Step-by-step, it shows you how to put things on the screen, move them around, read the keyboard, play sounds etc.  It even covers BASIC loaders.  Everything you need to start writing your own ZX Spectrum games in 97 pages.

Before I left the scene, this book was updated to include chapters on machine code basics such as binary, 8 and 16-bit registers, flags etc.  Essentially How to Write Spectrum Games for the Absolute Beginner.  I will dig this out, tidy it up and upload to itch.io soon.  Meanwhile, you'll have to make do with version 1.1: