We’re coming to the end of the Homes and Heritage project. I suppose one of our aims was to throw some more light on Cromarty - for the benefit of locals and visitors alike. So it seems fitting to end this series of weekly blogs with a look at the Cromarty Lighthouse.
There it is on the right. It was designed in 1846 by Alan Stevenson, who was also responsible for the lighthouse at Chanonry Point. 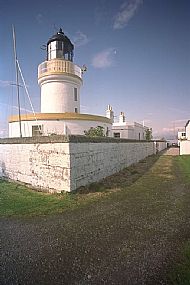 The Stevenson family were responsible for nearly all of our Scottish lighthouses. Alan’s father, Robert, built the famous Bell Rock lighthouse off Arbroath, and his brothers David and Thomas were also in the business. It must have come as a disappointment when Thomas’s son, Robert Louis, decided to become a writer instead of a lighthouse builder, but we can be glad he did, since he gave us both ‘Treasure Island’ and ‘Kidnapped’.

Because our lighthouse is built on an elevated site, it didn’t need to be too high - only 42 feet - and yet it had a range of 14 miles. It was automated in 1985, but before that it was looked after by resident lighthouse keepers who lived in the adjoining cottages. It must have been one of the best postings in the service - maybe the only lighthouse in the country that sits in the middle of a town, with a pub right across the road. Eric Malcolm remembers Mr Fraser and Mr MacEachern from the 1930s, in their trim blue uniforms, looking after the gas-powered light with its clockwork mechanism. Here is a photo of the keeper in 1920, Robert Clyne.

The keepers’ cottages are always described as ‘Egyptian’ in style, and together with the lighthouse, they make a pleasant addition to the Cromarty townscape. It’s good that they are so well looked after by the current owners, Aberdeen University’s marine research field station, but it did come as a blow when we woke up on 28th February 2006 to discover that the light had gone out and the lighthouse abandoned by the Northern Lighthouse Board. There was no local consultation - it was just turned off.

And now it’s time to turn this blog off as well. I’ve enjoyed reminiscing about people and places in Cromarty, a town I have grown to love. The good news is that the project is going out with a bang. Our Exhibition in the Victoria Hall next weekend promises to be terrific. I look forward to seeing you there!