from the Main Chart.

This subsidiary Chart may be downloaded from the >LIBRARY< 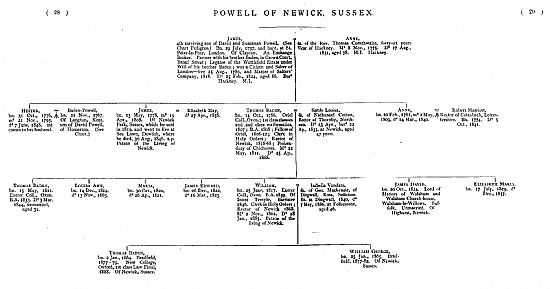 This branch of the family assumed the name of Baden-Powell as their surname in 1870.

2. HENRY WARINGTON SMYTH, bn. 3rd Feb., 1847. St. Paul's School, 1857. Is a Master Mariner and Lieutenant Royal Naval Reserve. Barrister of the Inner Temple, 1876, of the Admiralty Bar. A member of the Shipwrights' Company, and

HENRY POWELL, 3rd son of Baden and Hester Powell (see Chart Pedigree), was born 6th March, 1809. Of Exeter Coll., Oxon., B.A. 1831, M.D. 1839. Was in practice first at Tunbridge Wells, subsequently at Coventry, and afterwards at Brighton. A Mercer by Patrimony. He died at Brighton, 18th May, 1867, and was buried at Speldhurst, Kent, having married on l0th January, 1842, at Tottenham, Middlesex, Mary Sophia, daughter of James Eyre Watson, of Fillongley Grange, co. Warwick, Esq., J.P. (see Baden Pedigree), by whom he had issue five sons and five daughters. Mrs. Powell now resides at the Croft, Crowborough, Sussex.

Caroline, elder daughter of Henry M. Ingram, of Southover, Clerk in Holy Orders and Rector of Aldrington ; and has issue :—

40    PEDIGREE OF THE POWELL FAMILY