Someone from the neighbouring town of Neath has written an open letter to Banky on a social media website inviting him to do something in Neath:

Dear Banksy
I am writing to you on this website as it is visible worldwide. I just hope that you will see it.
Your recent artwork in Taibach, Port Talbot, has drawn many visitors to the area and the resultant nationwide publicity is sure to benefit the town.
I am aware that your artwork has a deep meaning and I write with this in mind.
The neighbouring town of Neath desperately needs something to draw visitors and I believe you could help.
The subject matter is certainly there, especially as no-one in taking an interest.
Raw sewage is being dumped into the River Neath close to the town center and there has been horrendous sewer smells in Old Market Street from a Victorian sewer running under Water Street.
Water from the Gnoll brook runs unto this street sewer and caused outbreaks of cholera before the Victorians covered it over.
So there you have it, a need to bring attention to something that really matters.
I wish you well.
Seasons Greetings
Name given. 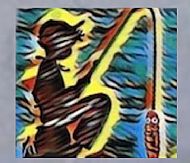 Meanwhile,  someone has been inspired by Banksy and has produced something to draw attention to the raw sewage being dumped in the River Neath.   It shows a young boy fishing on the river bank and catching a turd.

Maybe the unknown artist is tempting Banky to come up with something better, who knows?