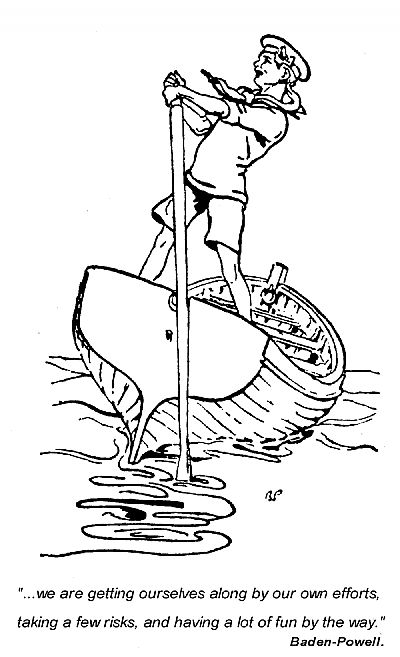 B-P's mother's mother was also artistic. She and her son-in-law helped to illustrate her husband's book "Ædes Hartwellianæ; or, Notices of the manor and mansion of Hartwell." (Printed for private circulation, by J.B. Nichols and Son, London, 1851 and available to read on-line).

Baden-Powell painted or sketched whenever he could. Generally, his works are humorous or informative. His books are all illustrated with his whimsical pen-and-ink sketches. He always travelled with a "sketchpad" that was in frequent use, either pencil sketches or "cartoons" for later water-colours. He also made a few sculpture. Alas! There is no catalogue of all his works.  Twelve paintings are hung the British Scout Headquarters at Gilwell Park. In 1911 & 1912, he went fishing in Norway;  jis two sketch books were given to the Scouts of Norwayby his widow - these have been scanned and made into a very few facsimile books.

Pages of his field diary, complete with drawings, have been displayed at the National Scouting Museum in Irving, Texas.

My sketching, such as il is, besides giving me a scrapbook record of my travels, and bringing me in money, has taught me to recognise beauties in nature which would otherwise have escaped me.
Soon after my arrival in India the Graphic offered remuneration for sketches of interest from the front, so I tried my hand at it, and to my surprise and satisfaction I got a cheque for six guineas for the first attempt.
So I didn't delay to send in more, and this was the beginning of a long and happy connection with that journal. It brought me into personal touch and friendship with Mr. Carmichael Thomas, then proprietor and Editor. Also it brought me into touch with a very useful addition to my slender income as a subaltern.

I have even tried my hand at sculpture.
When I was stationed in Malta many years ago a sculptor came there from Italy to carve a memorial for the Cathedral, and he allowed me to come and watch him at his work.
One day I arrived in the studio while he was out and to pass the time I took up a lump of clay and fashioned it into the head and shoulders of a sailor smoking a pipe.
This I stuck up on the wall for the amusement of his two or three apprentices.
When he came in and noticed this work of art he asked who had made it and thereupon told me to come next day and start modelling from life.
He secured for me a live model, in the shape of a pathetic old half-blind Negro from Nubia. With his pronounced features the subject was not a difficult one and by a fluke my bust of him turned out a success, so much so that when exhibited later at an Art show it received very favourable notice from the critics. 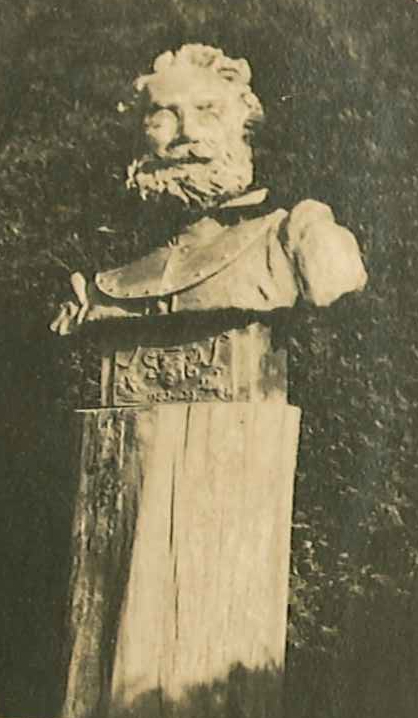 This fairly fired me with enthusiasm, and afterwards, when I was back in England, I started on a moreambitious theme, namely a bust of my hero. Captain John Smith of Virginia.
I could not afford a model to work from, nor could I get time for it in the daytime. I therefore went at it at bedtime.
By using a three-leaved folding shaving glass I was able to use my own head, ears, and back of neck for the purpose. His features I modelled from imagination, indicating as much as I could of his very varied and striking character.
John Smith was a soldier of some renown, and a navigator of great experience, also a geographer and explorer and colonial governor.
He fought with notable gallantry in Sigismund's army against the Turks, where, having defeated three of their champions in single combat, he was awarded, for his coat of arms, three Turks' heads "decapitated."
Later he was sent in command of an expedition of three ships to explore the coast of America, but as he found these ships totally inadequate for the purpose he adopted a quite simple expedient, sailed over to France and there fought and captured three bigger ones.
He then took a party of colonists over to Virginia and established them in a settlement on the James River. He went out to do a bit of reconnaissance on his own, coupled with a little duck-shooting, accompanied by a Red Indian as a guide, and as a precaution against desertion bound him to himself with his garter.
They were attacked by hostile Indians, and in their effort to get away the guide fell into a swamp, dragging John Smith after him. He was captured and taken before the Chief, Powhattan, and was only saved from being put to death through the intercession of the Chief s daughter, Pocahontas.
Later they became great friends. Pocahontas was converted to Christianity and married Rolfe, of an old Norfolk family and Smith's lieutenant.
Smith was badly wounded by an explosion and came home to England, to linger some years, eventually dying of his injury.
But to the very end he was the cheeriest of mortals and when dictating his biography he laughed so much at some of his misfortunes that his secretary confessed to having taken them down rather vaguely.
So his was an interesting head to model and luckily came out so satisfactorily that I had it cast in bronze.
Shortly after I was invited to send some of my work to an exhibition of works of art by officers of the Navy and Army, so I sent along old John Smith.
The manager of the gallery, instead of setting it up there, thought there was some good in it and sent it round to the Royal Academy, which was receiving sculpture that day, and to my amazement it was accepted.
Another bombshell in my life!
There was no holding be after that; but as soldiering duties happened to come on heavily just then I was not able to do more.
Also I reflected that it was well not to tempt Fortune too far and that it was wiser to rest on my laurels.
This I did and, barring one or two small statuettes, I have so rested ever since. 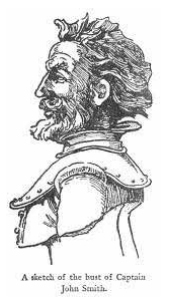 The Vigil, now at British Scout HQ at Gilwell Park 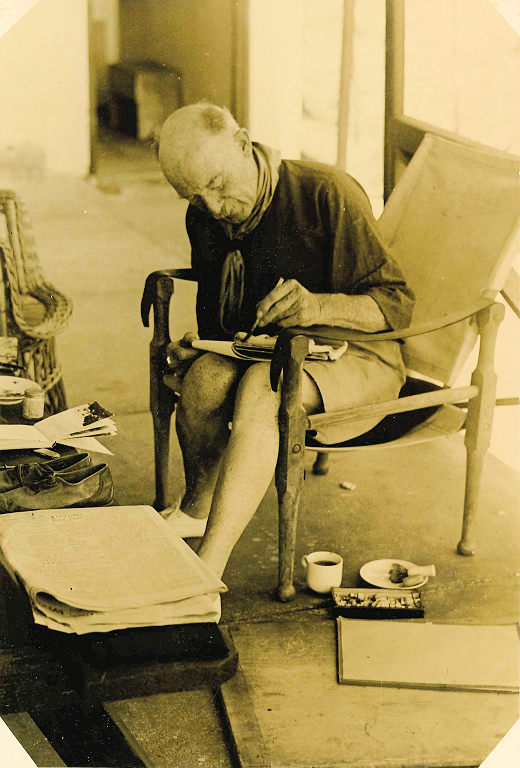 There has been an exhibition of seventy one of his works, loaned by his widow.  Where they are now is not known. 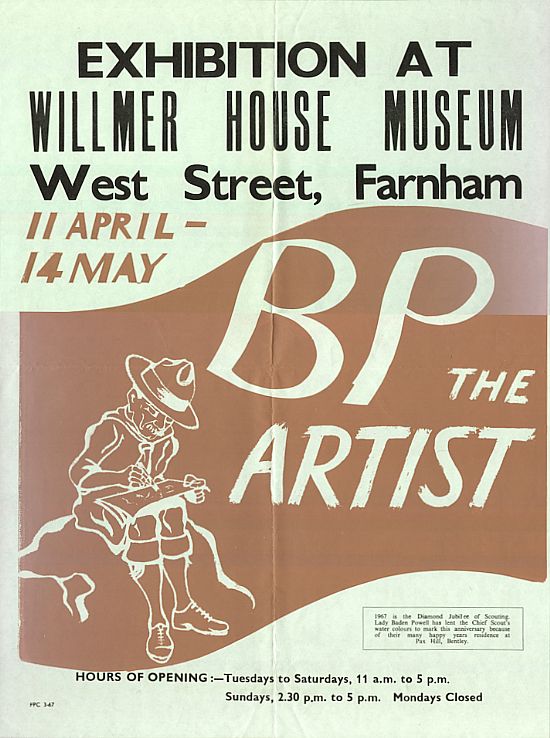 Alas!  The Catalogue was not illustrated, was text only:- 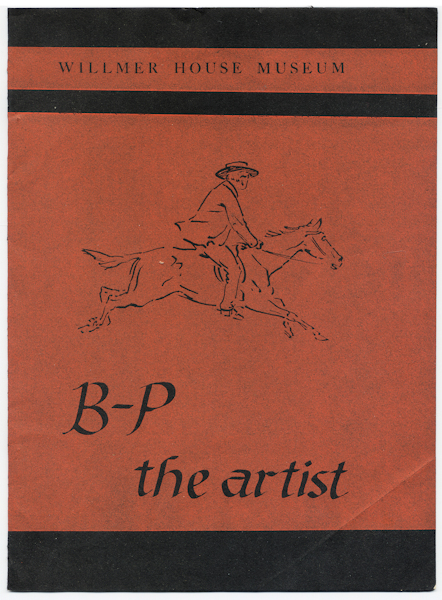 1967 is the Diamond Jubilee of Scouting - the first Boy Scout camp was on Brownsea Island, 29th July to 8th August 1907. The founder, Robert S.S. Baden-Powell, lived at Pax Mill, Bentley, from 1910 to 1930. Lady Baden-Powell has lent this selection of his paintings to mark this anniversary because of the many happy years during which they looked upon Farnham as their home town.

Lord Baden-Powell achieved outstanding fame twice in his life, first as a soldier and the hero of Mafeking, and secondly as the founder of Scouting and inspirer of the Girl Guide movement. Throughout his long and fruitful life he was constantly drawing in pencil, pen and ink and water colour and the spirit of his draughtsmanship would have gained him a great reputation if it had not been outshone by his qualities as a
leader of men and boys.

The Committee wish to thank Olave, Lady Baden-Powell and Major and Mrs.A.G.Wade for all their help and advice in making this exhibition possible.

The cover design is adapted from the drawing of Cecil Rhodes at the first meet in Salisbury, Rhodesia, after the end of the Matabele war, which forms exhibit 1.10.1 in the exhibition.

At the head of the stairs.
1. Sketch, Renewal of Hunting at Salisbury at the end of the Matabele War, November 1896.
2. The Blind Slave, in bronze, signed R.S.S.B-P.

Room 1.
3. Poster, The Relief  of Mafeking.
Glazed pottery figure of B-.P with his dog.
5. Hoof of 'Orara' - charger presented to General B-P by the People of Australia, 1900.
6. Hoof of 'Black Prince' - charger presented to General 3-P by the People of Australia, 1900.
7. Frame of drawings.
The following two exhibits were collected by
B-P in the Swat Valley, N.India, in 1893.
8. Head in -grey micaceous schist.
9. Part of base of a statue in grey micaceous schist.
In glass cases - Presentation swords.
10. To Major-General R.S.S.Baden-Powell from the Women of Britain in memory of Mafeking.
11. Presented by the Citizens of Port Elizabeth, Cape of Good Hope to Colonel Baden-Powell in Commemoration of the Gallant Defence of Mafeking, 1900.
12. Presented to Major General Robert S.S.Baden-Powell by over two thousand residents of Dunedin and District, New Zealand.
13. Presented to Lieutenant-General R.S.S.Baden-Powell, D.S.C., by the Citizens of Grahamstown in recognition of his splendid services at the Siege of Mafeking during a period of 230 days, June 1900.

Please note that any Link on the Right or at the bottom of the page is an advertising Link that will take you elsewhere.