It may be six months away, but excitement is already building ahead of the third annual Colonsay Book Festival (CBF).

A stellar line-up of authors has been announced for the two-day event – dubbed a “literary lock-in” – which will take place on the enchanting Isle of Colonsay (population: 130) in the Southern Hebrides on 26 and 27 April 2014.

“The event has been a huge success in its first two years, with many audience members now making an annual ‘pilgrimage’ to Colonsay to take in the festival!

“Tickets will be on sale from January 2014 and you can keep up to date with all our news on our website and via Twitter and Facebook.”

Conceived and produced entirely by the island’s residents, the Colonsay Book Festival has carved its own niche in Scotland’s busy book festival calendar since launching in 2012.

Many of Scotland’s best loved writers and poets have now made the journey by ferry to experience Colonsay’s literary celebrations, with audiences flocking from all over the world to join them.

Ian Rankin, whose Colonsay Book Festival appearance in 2013 coincided with his birthday, summed up the event’s appeal. He said: 'It is no mystery - take a wonderful island, add readers and writers, sprinkle the whole with outstandingly good organisation ... and a magical festival results!!”

Tickets for the 2014 Colonsay Book Festival will go on sale from www.colonsaybookfestival.org.uk in January 2014.

Ferries to Colonsay during the summer period (April to October) typically run from Oban on Mondays, Thursdays, Fridays and Sundays, with additional services from Kennacraig (via Islay) on Wednesdays. Check www.calmac.co.uk for up to date timetable information. 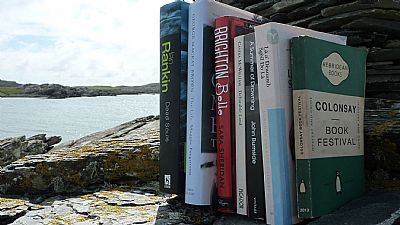 The countdown has begun with one week to go before the second outing of what is arguably Scotland’s most boutique literary celebration, the Colonsay Book Festival, 26 -28 April 2013.

This year’s event will again see a host of pre-eminent Scottish authors set sail for the small but perfectly formed Isle of Colonsay for an unmissable Hebridean literary weekend, this year headlined by internationally prized crime writer Ian Rankin.

The authors’ ferry travel to Colonsay is being sponsored by Caledonian MacBrayne  whose Chief Executive, Martin Dorchester, is also making the trip to the Inner Hebridean island for the Book Festival. Mr Dorchester and his wife, who is currently studying creative writing at university, will host a reception for the authors during the ferry crossing from Oban and the writers will also have the opportunity to meet the vessel’s Captain.

“There are so many book festivals of all kinds these days but I think Colonsay really offers something quite unique. All the authors spend the whole weekend on the island, soaking up its breathtaking beauty and meeting the residents, which creates a fantastic shared experience for everyone involved in making the festival happen.

“Despite our stellar line-up, we are still a very grassroots event so we are hugely grateful to all our supporters, and especially to Caledonian MacBrayne.”

Martin Dorchester, Chief Executive of Caledonian MacBrayne, said: "We are always keen to work with local communities on innovative events of this kind which bring visitors to the islands. The Colonsay Book Festival is a particularly good example of what can be achieved if communities set their sights high and I am sure it will go from strength to strength."

Sara Sheridan said: “A book festival on a gorgeous Hebridean island with lots of other writers, a great audience and a cosy pub? It’s like a literary lock-in. I’m really looking forward to it.”

In November 2012, Ian Rankin  the UK’s bestselling crime writer, brought back Detective Inspector John Rebus to popular acclaim in “Standing in Another Man’s Grave”. And on Monday 15 April this year, Ian Rankin tweeted confirmation that Rebus would be returning again, this time in “Saints of the Shadow Bible”, due out in hardback on 7 November 2013. This latest book will see Rebus paired against one-time nemesis Malcolm Fox as a 30-year-old case is reopened.

Candia McWilliam, who has long connections with the Isle of Colonsay, first came to public notice with her novels “A Case of Knives” (1988) and “A Little Stranger” (1989). “Debatable Land” (1994) won the Guardian Fiction Prize, and, in 1998, its Italian translation won the Premio Grinzane Cavour for the best foreign novel of the year. Most recently, she published “What To Look For In Winter: A Memoir In Blindness” (2010).

Sara Sheridan is a prolific young Edinburgh writer of work ranging from books for children of all ages to historical adventures (including “The Secret Mandarin” and “The Secret of the Sands”), and most recently, crime fiction. Her latest book, “London Calling”
(2013), is the second in a series of ‘cosy crime noir’ set in Britain in the 1950s, and featuring the feisty private detective, Mirabelle Bevan.

Maggie Fergusson is literary editor of Intelligent Life and Director of the Royal Society of Literature. Her book, “George Mackay Brown: The Life” (2006), won the Saltire Society

Award for a First Book. She recently published “Michael Morpurgo: War Child to War Horse” (2012), a unique collaboration in which Maggie’s seven biographical chapters are matched by seven autobiographical stories by Morpurgo.

Angus Peter Campbell is a noted Gaelic poet and novelist, and also a journalist, broadcaster and actor. Originally from South Uist, he now lives in Skye. In 2001 he was awarded the Bardic Crown and also given a Creative Scotland Award. His latest collection, “Aibisidh”, was shortlisted for the 2012 Scottish Mortgage Investment Trust Book Awards. He has also collaborated with the photographer Cailean Maclean on a TV programme for BBC Alba on walking through the Hebrides.

Mairi Hedderwick is a famed Scottish illustrator and writer, possibly best known for her Katie Morag series of children’s books set on the fictional Isle of Struay, which is loosely based on her former home on Coll. She has also produced several books of travel writing for adults. Mairi received an honorary degree from the University of Stirling in 2003, in recognition of her “outstanding contribution to writing and illustration in Scotland, especially for children”.

Ron Butlin is the current Edinburgh Makar (Poet Laureate), having been re-appointed for a second term in 2011. In 2009 he was made the first Honorary Writing Fellow of the University of Edinburgh, together with Ian Rankin. An acclaimed poet, novelist, short story writer and opera librettist, he has published over a dozen books, several of which have won Scottish Arts Council Book Awards. In addition to his plays for BBC radio and theatre (most recently “Sweet Dreams” for Oran Mor in Glasgow), he has written five operas, two of them for Scottish Opera.