Violet née Thornewill was born on 8 July 1885 in The Abbey, Burton‑on‑Trent, the younger daughter of Robert Thornewill and Eliza Arabella Sara Hamilton, known as "Ella". 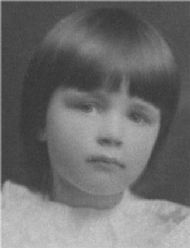 Violet's father was the son of Robert Thornewill and his wife Martha Hammond Wright, who was one of the Wrights of Eyam, Derbyshire, whose records go back to the fourth year of the reign of Edward III (1331). Violet's grandfather Robert died in 1858, long before Violet was born, and the business was successfully run for some years by his widow. She died just before Violet's fourth birthday. Violet's father died in 1914, when she was 29.

The Thornewill records go back to Thomas who died in 1548; the family had been in the iron business in Burton for ten generations, since the early 1700s, that is, they had already been established for two generations in their trade in Burton when our ancestor Joseph moved to Burton to start in the brewing trade. A Family History of the Thornewills is a separate work.

Violet's mother's father was the Venerable George Hamilton and was born in Ireland; he rose to become Archdeacon of Lindisfarne, and then Archdeacon of Northumberland and Canon of Durham, and was referred to as "The Arch".

The Arch died on 29th September 1905, curiously, while Violet was staying with the Clays on a grouse-shooting holiday at Grinton in Yorkshire.   Gerard and his brothers were sa=haring a bedroom, and they were discussing the girls in the party.  Violet's name came up.  "HANDS OFF!" said Gerard, "Violet's MINE !"

Later, Gerard "spoke" to Violet one day on the moors, but before she could give him her reply, the news of her grandfather's death arrived and she fled home to be with her family.  Gerard then wrote her a letter, which appears elsewhere on this WebSite.

The Arch's wife, Violet's mother's mother, was "Bella Best", Arabella Sarah Best, whose father came from Worcester. He was an accountant with the East India Company in Bombay, and his wife and children seem to have travelled much between there and Sunderland, where her mother came from. He died in Bombay in 1825 aged 33, leaving his widow - possibly in India - four months pregnant, with four other children under the age of ten. Bella died in January 1868, when Ella was nearly 9. A year and a half later, in June 1869, her father The Arch married the Lady Louisa Clements, who became known to her step-grandchildren, one of whom was Violet, as "Young Granny". Violet's mother Ella died aged 60 in 1919, when Violet was 34.

Violet was "a sickly child", and medical opinion at the time insisted she be cossetted - perhaps her doctors were right, for she lived to be 95. She always remained proud of her "great height", although that was not noticeable after middle age. Although not "blue stocking", she had a great sense of fun; and was a force to be reckoned with, with high standards.

She once related how, during their courtship, she and Gerard had been at a dinner party, after which the ladies withdrew (to the withdrawing room, of course), leaving the gentlemen to their port.  So she started spying on them through the keyhole.  gerard suspected, and discharged a soda-water syphon through the keyhole.

Violet had a half-brother, Robbie, whose mother had died at his birth. He had been brought up by a very religious nanny, whose influence sent him into the church. He died unmarried in 1940, when Violet was 55.

who was married at 26, in 1910, to Bertram Sargeaunt, then 33. He was director of the United Services Institution, and later was Government Secretary in the Isle of Man, where he was Commandant of a POW camp during the First War. He was never very well off – he retired in the 1930s on a fixed Government pension, which, though quite "handsome" at his retirement, with inflation, soon became worth very little. Violet and he remained very fond of each other, and in old age, after the deaths of her husband (in 1955) and her sister (his wife) in 1962, Violet was a great support to him. He lost his sight in his eighties, and survived a succession of harridan housekeepers to the age of 101. He was "a lovely man", kind, gentle and witty, and played the piano even after losing his sight.

During the Second World War, which broke out when Violet was 55, she took an active part in local fund-raising and in the local Red Cross.

Always "Mummy" to her sons, Violet was "Gran" to her grandchildren. When her granddaughter Gill once was considering a marriage proposal from a not-very-suitable young swain, rejection of it came with the thought of presenting him to Gran.

After the death of her husband Gerard in 1955, and with the removal of her younger son Ralph and his family to Salisbury, the capital of Rhodesia, Violet also moved there, to a new house she built in Wingate Road, Highlands, which she called "Knightley".

About this time, she decided to have a portrait of her husband commissioned, and chose a German artist called W. Craig-Hainisch, then living in Britain. When the work was complete, Violet flew to Britain for an unveiling, to be held at her sister Kattie’s flat in Hurstpierrepoint, in the presence of the artist, friends and members of the family. When the artist arrived, he was met by Kattie’s husband, and immediately said, “I have drawn that face !”. There, in the corridor, was the pen-and-ink drawing that he had done during the First World War while he had been a PoW on the IoM, and Berkie had been the Camp Commandant!

After the Rhodesian Government made its Unilateral Declaration of Independence (U.D.I.) in 1965, when she was 79, Violet returned to England, living first at Drayton Court, near Langport, where she held a dance to celebrate both her 80th birthday and the 21st birthday of her grandson Crispin. After two years there, she moved into a converted wing of Bagborough House (the home of the Brooke-Pophams, long-time friends of the in-laws (the other B-Ps) of Violet's son Gervas), before moving a year later into an annexe made by converting a barn adjacent to Hardings in North Cheriton, the home of her son Ralph, who had also returned from Rhodesia at about the same time. Her son Gervas had retired back to England in 1964. When Ralph sold Hardings and moved into Drakes Cottage (which had been part of the same property), Violet went to live at Ford Lodge with Gervas.

Although she was physically hale, sadly, much of her eyesight and much (but not all) of her memory had slipped away before then, but she still used to help with laying the table, etc.. There were many untitled family photographs of people whom she could once have identified, but she could neither see them clearly, nor remember who they were.  She had her own photograph album started in 1906 upon her marriage; and that of her mother, Ella nee Hamilton; and that of her father’s mother, Martha Hammond nee Wright, containing lots of Cartes de Visite, of which less than a dozen were identified.  They can be found >here<

Violet was operated on for cancer when she was 90.  She related this incident - as night fell on her first night in hospital, a nursing assistant came to her bed:-

"I beg your pardon?"

It ended with the assistant putting her knee on Violet's chest to try to pull them out.

She was left alone.

After the operation, Violet made a full recovery.

Five years later, at the age of 95, Violet was living with her son Gervas at Ford Lodge, Wiveliscombe, Somerset.  By this time she was almost blind, but "of sound mind" and still helping around the house where she could.  Her daughter-in-law Betty helped her to get up in the mornings. On 22 December 1980, while cleaning her teeth . . .  "Oh, Bet ! I DO feel funny !"

So Betty sat down, took her onto her lap, put her arms round her and cuddled her as she went on her way . . .

She lies buried in the graveyard of the Parish Church of St. Andrew,Wiveliscombe.