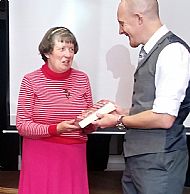 The event attracted a wide group of attendees, including those from the public and private sectors, as well as community activists. It also attracted those interested in finding out more about the increase in hate crime and racism following the EU referendum in June 2016. The morning focussed on understanding hate crime and in exploring hate crime statistics in Wales, and the rest of the day centred on indentifying factors that led to racism and how these could be tackled through, for example, education.

Representatives from a number of organisations attended, including:

All-Wales Hate Crime Research Project Manager, Gareth Cuerden (pictured right), gave the keynote presentation on current research into hate crime in Wales. He confirmed that there had been a significant increase in this following the result of the referendum. He discussed the issues his organisation faced in encouraging victims to report incidents and shared harrowing examples of hate crime. His presentation generated significant discussion within the group, with members asking questions such as how to prevent such crimes taking place in the first place.

International guest presenter, Yasus Afari (pictured right), used his skills as a Jamaican "edutainer" and poet to explore issues and challenges that commumities face as they become increasingly diverse. He emphasised how we were all people of the world and that diversity should be welcomed. He spoke of the specific issues of Atlantic slavery and how there can be no excuse for not exploring these, but he was clear in stating that this should be done openly, without opening old wounds. Only by working together, he stressed, would we tackle the problems of the world. 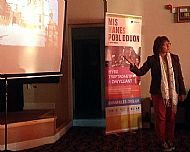 Dr Marian Gwyn (pictured right) presented "Cymru Ddu - Ein Cymru Ni / Black Wales - Our Wales", which provided an overview of the project which this website promotes. She provided a historical overview of Wales's role in Atlantic expansion and in the slave trade, explaining how there were many connections which has previously been hidden but which were only now becoming known. She highlighted why Britain's role in the wider world had led it to be the culturally diverse and vibrant place it was and emphasised that understanding the shared history of our world was a significant step in addressing racism.

Jendayi Serwah, of Race Council Cymru, spoke about the importance of education in understanding difference and diversity but emphasised that it was only one step - action was needed if we are to change society. She reminded us that most people know nothing of African history prior to Atlantic slavery and that this was an issue that needed addressing. She ended by distributing questionnaires on the way forward for the celebration of Black history and Black people in Wales. The data gathered from these would contribute towards Jendayi's development of a 5-year arts programme for Black history on behalf of Race Council Cymru.

Liz Millman of Learning Links International (pictured right) spoke about her work in Jamaica, and about her support for the recognition of Jamaican as an official language. She reminded everyone of the struggles that the people of Wales had faced in achieving equal official status for Welsh. There was much, she believed, that the two countries could do to help each other and to learn from each other.

The day ended with delegates expressing their approval. Most commented on included: