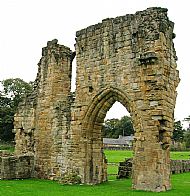 The Pennants, the former owners of Penrhyn Castle, originate from Flintshire. They descend from Thomas Pennant (d.1522), Abbot of Basingwerk Abbey, Holywell (pictured).

The Pennants in Jamaica

The first Pennant in Jamaica was Gifford (d. 1676-7), grandson of Abbot Thomas.  Jamaica had been taken from the Spanish by Oliver Cromwell's forces in 1655. Gifford, a captain of a company of horse, was garrisoned on the island from around 1656-8.

To develop Jamaica as a sugar-producing colony quickly, generous land grants were made available. These attracted both opportunists from Britain and many of the soldiers on the island to become planters (owners of sugar plantations). Gifford took full advantage of the grants and he bought and sold land rapidly, acquiring 18 times the average holding. Other families, such as the Beckfords and the Barretts, had larger plantations but the considerable size of the Pennant estates and the early settlement of the family in Jamaica placed them at the centre of Britain's sugar industry.

Gifford's son Edward (1672-1736) increased his father's landholdings and became a significant figure in the Jamaican establishment, becoming Chief Justice and a member of the governing council. On his death, Edward's large estate was divided among his three sons John, Samuel and Henry. His will ensured that a fourth son was adequately cared for until his death, he being unable to inherit until he 'came to his senses'.

While Jamaican plantations made many of their owners extremely rich, the island itself was difficult to live on. Island residents had to cope with tropical storms and diseases, the constant threat of slave rebellion, alcohol abuse and the overwhelming brutality of daily life in a slave-based society. Like many wealthy planters, the Pennant brothers left the running of their estates in the hands of agents and by the 1730s all three were settled in Britain.

The Pennants in Britain

Their wealth enabled them to move into British society at the highest level. Samuel (1709-50) was knighted and became Lord Mayor of London in 1749. He died after contracting 'gaol fever' (typhus) while presiding over a case at the Old Bailey. Both he and Henry died without children, leaving their estates to their brother John. 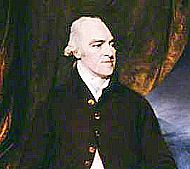 John Pennant (d. 1781) was a successful West India merchant in Liverpool, Britain's largest slaving port. He also invested in the salt industry, going into partnership with Colonel Hugh Warburton of Winnington, Cheshire, who, through his wife, owned half of what had been the medieval Penrhyn estate in North Wales. John and his son Richard (pictured) began buying the remainder of the estate, reuniting it when Richard married Colonel Warburton's daughter in 1767.

Penrhyn flourished under Richard Pennant, 1st Lord Penrhyn, as he spent vast amounts of money in developing his estate. Having no children, on his death Richard's assets passed to his second cousin George Hay Dawkins, who, under the requirements of the will, adopted the surname Pennant.
The British slave trade (the purchase of enslaved Africans and their transportation and sale across the Atlantic) was abolished in 1807, the year before Richard Pennant's death. Slavery itself (the use of a coerced, unfree labour force) became illegal in British colonies during George Hay Dawkins Pennant's lifetime. The profitability of the West Indies sugar industry fell sharply at the end of slavery. By this time, however, the Pennants had already invested much of their Jamaican fortune into the development of Penrhyn slate quarry, which soon provided them with even greater prosperity.

George Hay Dawkins Pennant (1764-1840) devoted his energies to building the Penrhyn Castle that stands now. He had two daughters, Juliana and Emma. Juliana married Edward Gordon Douglas, a handsome Scotsman and a captain (later colonel) in the Grenadier Guards. He inherited Penrhyn estate on his father-in-law's death and it is from this period that the family name became Douglas-Pennant.
Edward Gordon Douglas-Pennant was vigorous in improving his North Wales estate, and he invested widely in his tenanted farms. In her jounal, his daughter Adela describes him as a shy but hard-working man; he was affectionately known locally as 'yr hen lord' (the old lord). He represented Caernarvonshire as MP for 25 years, until he was elevated to the peerage in 1866, becoming the second 1st Lord Penrhyn.1 ​ 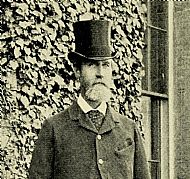 Edward's son George Sholto Douglas-Pennant, 2nd Lord Penrhyn, (pictured) took over the running of the estate in 1884, two years before his father's death. George married twice, producing 15 children, 12 of whom were daughters.

He was a man of strong convictions. In particular, he had little time for the developing trades union movement. His single-minded approach to the management of his slate quarry led to a devastating and long-lasting strike between 1900-03.

Perhaps because of local bitterness towards the family following the strike, the 3rd Lord Penrhyn, Edward Sholto Douglas-Pennant (1864-1927) spent little time at Penrhyn. He preferred to live with his wife at their other estate, Wicken Park in Northamptonshire. Penrhyn was not left empty, however, as many of his sisters remained unmarried and continued to consider it their home.

The Pennants, like many families, suffered great losses during the 1st World War. The 3rd lord's two brothers, George and Charles, along with his son and heir Alan, were killed in the conflict. Alan's younger brother Hugh Napier (1894-1949) became 4th Lord Penrhyn on his father's death.

Hugh Napier Douglas-Pennant served as a magistrate in Caernarfonshire and was a keen breeder of Welsh black cattle. He sold the last of the family's Jamaican plantations, Pennants, in 1940. 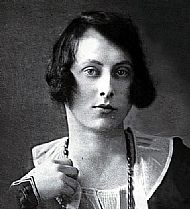 Never coming to terms with the loss of so many close family members, he turned to alcohol for solace. His wife Lady Sybil (pictured), however, was a great entertainer, bringing the castle to life with weekend parties. She was also an active fund raiser for Allied troops during the 2nd World War. Lady Sybil eventually divorced her husband, and he died alone in Penrhyn Castle in 1949.

Hugh Napier left his estate to his favourite niece, Lady Janet Pelham, who adopted the surname Douglas Pennant (without the hyphen). In lieu of enormous death duties, Lady Janet handed Penrhyn Castle, along with around 45,000 acres (18,200 ha) of Snowdonia, to the National Trust. She retained several tenanted farms and houses, managed woodlands, and much of the contents of Penrhyn Castle, including most of its prestigious art collection. Lady Janet continued to live on the estate, in the enlarged and modernised former head gardener's house, until her death in 1997.

Lady Janet's eldest son Richard inherited, and still owns, her estate. His younger brother Edmond lives near the castle. He is an authority on his family's history and has been of considerable assistance in the research undertaken for this website.
On the death of Hugh Napier, the 4th Lord Penrhyn, the title of Baron Penrhyn passed to his closest male relative.

1. Why there are two 1st Lord Penrhyns: In 1783 Richard was made Baron (Lord) Penrhyn of County Louth, Ireland. While providing him with the much-desired title, this did not allow him to sit in the House of Lords. It was also a title that died with him as he had no issue. In 1866, however, Edward Gordon was elevated to the full British peerage as Baron Penrhyn of Llandygai, enabling him to take his place in parliament's upper chamber.