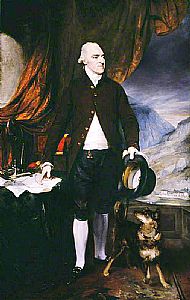 In Britain, Richard Pennant (1739-1808), 1st Lord Penrhyn, was a businessman, an industrialist, an improver of his landed estate, and a benefactor to his tenant farmers and employees. In Jamaica, which he never visited, he was the owner and exploiter of many hundreds of human beings.

On his father's death in 1781, Richard inherited the family's estates in Jamaica and in North Wales. He had already been running both for some time, due to his father's deteriorating health.

His parents, John and Bonella Pennant, had emigrated from Jamaica to Britain in 1739, the year of Richard's birth. Along with other wealthy planters, they preferred to leave their plantations in the hands of managing agents, while they enjoyed a superior lifestyle in Britain.

John brought his son up as a businessman in London and in Liverpool. Despite their growing commercial and landed interests in Britain, both men remained focussed on their Jamaican assets throughout their lives. There was good reason for this - it was not until after Richard's death that the family's profits from the UK outgrew those from Jamaica.

In 1765 Richard married Ann Susannah Warburton of Winnington Hall in Cheshire. She was heiress to half of the former medieval Penrhyn estate in North Wales. The other half had been in different ownership for many years but was bought by John Pennant, Richard's father, not long after his move to Britain. Richard and Ann's marriage brought the estate under single ownership once more. 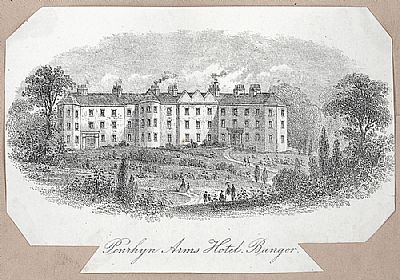 In his wider estate, he built roads, houses, hotels (pictured), churches, and schools.

He increased production at his slate quarry, just five miles from the castle. By the end of the 19th century Penrhyn quarry was one of the world's largest suppliers of roofing slate.

Richard's immense wealth enabled him to maintain and enlarge two country houses, one on Penrhyn estate, the other in Cheshire, inherited from his late father-in-law.  He also maintained a town house in London's prestigious Grosvenor Square, Mayfair.

Richard Pennant was a powerful figure in the pro-slavery movement. He became chairman of the Committee of West India Merchants, an influential lobbying group for those with commercial interests in the Caribbean.

He was also MP for Liverpool for 19 years (1767-80 and 1784-90). Liverpool was Britain's largest slaving port, and its expansion during the 18th century had resulted from its growing Atlantic trading links with Africa, the Caribbean and North America.

Richard was committed to slavery and he used his position as MP for Liverpool to speak in the House of Commons against the abolition of the slave trade. Though opposition to the trade had been present from its beginnings, the campaign that eventually succeeded was driven by the Society for the Abolition of the Slave Trade, which was established in 1787.

Pennant argued that by ending the trade, Britain would be destroying its training ground for young seamen, and he also firmly denied that the transportation of enslaved Africans across the Atlantic was cruel. It is estimated that between 10-30% of those transported died on the journey, and of those that survived, few fully recovered from their ordeal.