Past. Present and Future

December 2017 - the plant is bought by NPT Council

The Metal Box company, founded in 1921, specialised in manufacturing metal containers. Anticipating a boom in the industry in the 1930s, the company secured a tinplate works at Eaglesbush, near Neath, to supply their factories. It was expected that the works would employ around four hundred men at a time when many were unemployed and, in the period before the Welfare State, in desperate need of work. When the idea of canned food took off, Metal Box soon built their manufacturing plant next door to the tinplate works.

The company was later aquired by the Crown Packaging Company who owned other similar plants.

In October 2015 the company announced he closure of the plant with a loss of around 250 jobs.

This website looks at the past, present and future of the plant, which during World War II did much to help the war effort. 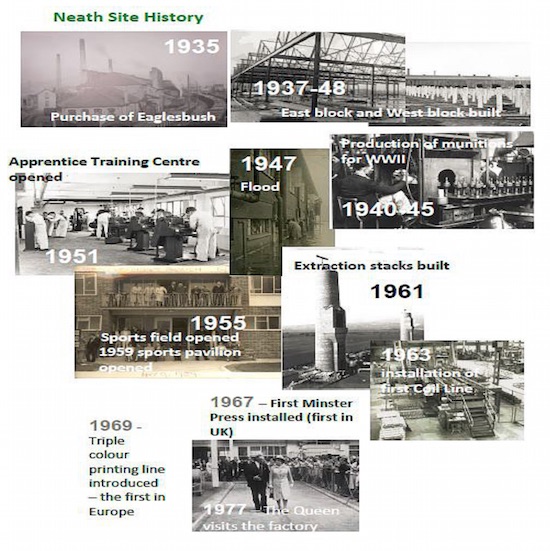 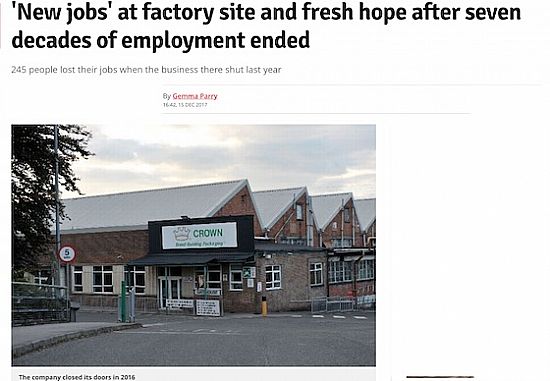 The site of the former Metal Box factory in Neath has been bought by a council which hopes to create new jobs there.

Known as ‘The Box’, the site became vacant last year after previous occupier, the Crown packaging company, closed, leaving 245 members of staff out of work.

The company revealed plans to close the factory in October 2015 after more than 70 years at the site, and shut in June 2016.

A spokesman for Neath Port Talbot Council said it was located within an important employment zone in Neath, and had been marketed as a commercial opportunity.

He said the purchase of the property would give the council the opportunity to protect and retain a strategically important employment site in Neath capable of delivering significant investment, floor space and job creation.

It is not yet clear what the site will be used for or how many jobs will be created.

All news items are produced in good faith and credit is given to the source.

Format and design are copyright and all rights are reserved -  November 2017.