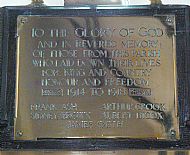 6 residents or former residents of Hinton Parva fought and died and have their names recorded in St Swithun's Church:

The memorial plaque in the church also records the names of another 21 men who enlisted but returned:

In the course of our research we have identified a number of other men with links to the Parish of Hinton who fought in the Great War. The complete list of names can be found in the library tab on the left.