Rail union RMT has written to the new Transport Secretary Anne-Marie Trevelyan MP urging her to take a new approach to the rail dispute.

Ms Trevelyan was appointed yesterday and is on record as opposing ticket office closures in her constituency.

In November last year, the Berwick MP held talks with rail operator LNER in a bid to reverse its proposals to cut hours at Berwick Railway Station's Travel Centre.

In the letter, RMT general secretary Mick Lynch said: "We are encouraged that you are on the record as wanting to save rail ticket offices, staffing and services in your own constituency and I would urge you to continue this approach as Secretary of State.

"There is clearly now the opportunity for a new approach from the Government to facilitate discussions between the RMT and the employers where the train companies and Network Rail are given more flexibility to secure a deal that is in the interests of workers, passengers and the country as a whole."

The RMT is due to take strike action on 15 and 17 September in a bid to secure a negotiated settlement to the ongoing national rail dispute.

To All Berwick Trades Council Supporters

A big thank you from the picketing CWU members to everybody who turned up last Friday (26th) for the first CWU strike day. We had a very good turnout and strong support from people passing.

The next day Berwick CWU is requesting support is -

Hope as many of you as possible are able to 'Stand by Our Posties'. We will keep you posted (!) with any other support actions.

Members of the Rail Unions, Berwick upon Tweed Trade Union Council and other activist`s from both sides of the Border formed a campaigning picket at Berwick Station on Tuesday morning to demand that our local railway station`s Ticket and Enquiry Office is retained into the future. The Rail Union`s understand that the Tory Government and train companies are looking to close nearly all the Ticket Offices across the network.

The action received overwhelming support from travellers who included visitors to Berwick from the USA and France as well as those from across the UK. Leaflets were given out and passengers queued to sign the Petition.

Carol Robson, from Carlisle, said “face to face communication with a human being is so important. No machine can match that. We need people to answer questions and help with problems.”

Mrs M Smith from Durham said she comes to Berwick every week  “and would be lost without the help of Ticket Office Staff.” Linda Town from Shipley in Yorkshire said “after finding our train to Edinburgh had been cancelled one of the Ticket Office Staff told us the time of the next train and where on the train empty seats would be available – they were so helpful and reassuring.”

This can be seen as just another attack on vital Public Services by the Tory Government and the campaign to save our vital Ticket and Enquiry Office at Berwick Station will continue. The service is vital to Berwick and the surrounding communities. 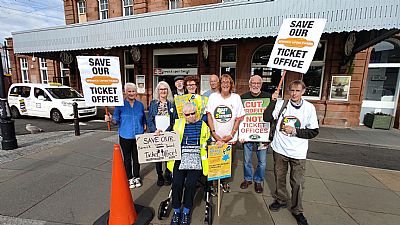 First - the local RMT and TSSA have expressed their thanks to everybody who has supported their picket lines over the last week - they have said they couldn't keep the energy and high level of public support up without other union members and community activists demonstrating support publicly.

CWU - Posties Over Profits  Friday 26th August 9-10am Woolmarket Sorting Office Berwick.  The CWU have welcomed our support and requested that we stand on the opposite side of the street, don't block the street and remember this is a residential street. Many thanks.

Hope to see you there - solidarity, Sarah

Ukraine Stop the War, Russia out, NO to NATO expansion 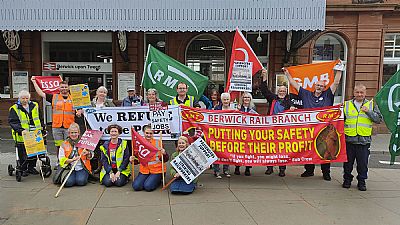 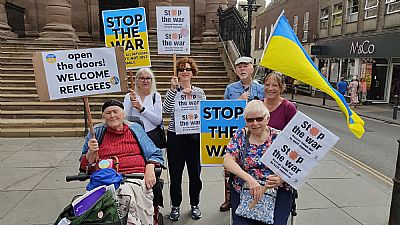 For info on further protests and events goto our events page