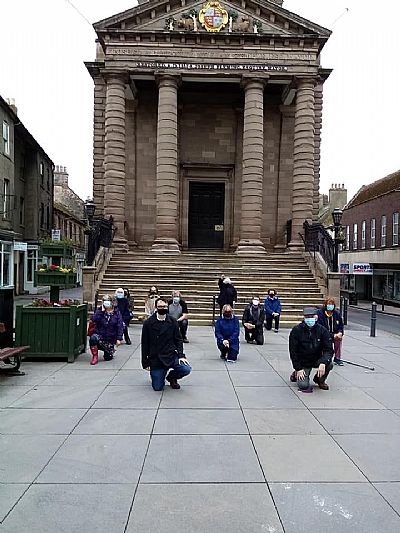 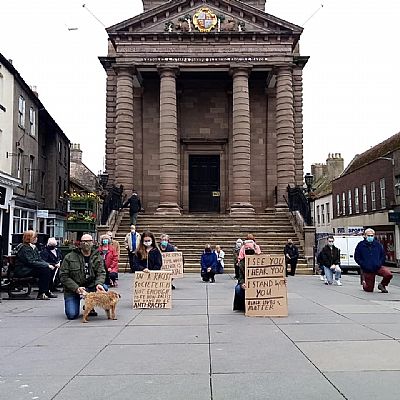 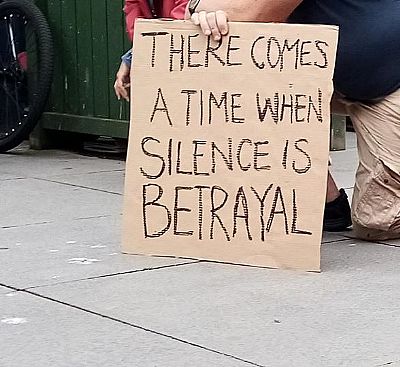 Wednesday from 10 June to 1 july

“Thanks to the people who came out in solidarity. Nice to see Berwick doing something meaningful and respectful." (Edward)

Protecting workers in the gig economy from Covid-19

The IWGB (Independent Workers’ Union of Great Britain) is warning that in this time of the virus many of its members (who include delivery drivers, couriers and cleaners) in the gig economy are facing undue risks, without proper protection. The union is about to take court action to require the Government to enforce am EU directive (which is still in force) that protects the health and safety rights of gig economy workers.

The gig economy has expanded in recent years to such an extent that about one in every ten adults are engaged. According to the IWGB that means 4.7 million workers in the UK.

The union points out that there is large-scale neglect by certain companies to provide testing and PPE (personal protective equipment) to workers who are delivering all sorts of goods essential for people’s wellbeing. These include deliveries of samples for coronavirus testing. In a letter to the Government the IWGB states.

“These workers have not been provided with advice or PPE of even the most basic sort, despite the fact that they are evidently exposed to a high risk of infection.”

The IWGB General Secretary, Jason Mower-Lee, said that delivery drivers fear that they would be dismissed if they raise their concerns at work.

The union asserts that the right to refuse to work in situations of imminent danger without fear of detriment or dismissal should be extended to gig economy workers.

The DWP (Department of Work and Pensions) responded to the union’s initial approach bypassing the letter to the HSE (Health and Safety Executive), which inspects workplaces. The HSE Chief Executive, Sarah Albon, wrote to the IWGB: “We are confident that the health and safety framework provides the necessary protection for workers, including those on non-standard contracts, and have no plans to amend the legislation.” A spokesperson added that the HSE is monitoring the situation closely. “As long as the duty of managing risks is undertaken diligently following the existing guidance, all of those who work should be reassured they can go home healthy and safe.”

The IWGB does not accept the unhelpful HSE response. The union is applying for a judicial review to require the Government to enforce the health and safety provisions pf EU law so as to protect hundreds of thousands of workers in the gig economy who are at enhanced risk in this time of the virus. Barristers have been appointed.

The union is asking for donations to crowdfund the judicial review.

“There is a massive problem coming down the line to which the government is giving very little attention is to the plight of those paying rent. Workers in the gig economy are some of the most vulnerable here and some of those most likely to lose their jobs altogether.

There are 8.6 million households in the UK living in a rented property, 4.6 million in private rents. So far the government has put a 3-month moratorium on landlords starting possession proceedings, which may possibly be extended, but this is no answer. The Labour party has asked for tenants to be given 2 years to pay back any rent arrears caused by Covid lockdown. This doesn't help as many won't be able to cover current rent let alone additions to cover arrears.

Local Housing Allowance is usually set at a level that doesn't fully cover most private rents. Others fall foul of the benefit cap and the bedroom tax. Low pay is a continuing problem.

Those in so-called social housing will be almost as vulnerable as those in private rents because of the way HAs are set up.

To avoid a massive increase in homelessness all arrears need to be written off by the government and the long-term housing crisis addressed.” (Pam)

As the Westminster government attempts a return to work

A SHOCKING STORY OF HEALTH INEQUALITIES

“Place matters - living in a deprived area of the North East is worse for your health than living in a similarly deprived area in London, to the extent that life expectancy is nearly five years less.” (Marmot report; Ten years on)

A few weeks ago, on 25th February 2020, the Institute of Health Equity issued a startling report on a different kind of health crisis than the coronavirus pandemic. Unlike the pandemic, this other health crisis has been in the making for the best part of the last decade, throughout the years of austerity. It need not have happened. The report finds that improvements in life expectancy for the most deprived communities have not just ground to a halt but have actually gone into reverse. The situation of the millions living in poverty has grown much worse. It is not just the pandemic that cries out for urgent remedies but also the steadily building crisis of poverty and ill-health that afflicts millions of our fellow citizens.

The following is an extract from the report.

“20th century, England experienced continuous improvements in life expectancy but from 2011 these improvements slowed dramatically, almost grinding to a halt. For part of the decade 2010-2020 life expectancy actually fell in the most deprived communities outside London for women and in some regions for men. For men and women everywhere the time spent in poor health is increasing.

This is shocking. In the United Kingdom, as in other countries, we are used to life expectancy and health improving year on year. It is what we have come to expect. The UK has been seen as a world leader in identifying and addressing health inequalities but something dramatic is happening. This report is concerned with England, but in Scotland, Wales and Northern Ireland the damage to health and wellbeing is similarly nearly unprecedented.

Put simply, if health has stopped improving it is a sign that society has stopped improving. Evidence from around the world shows that health is a good measure of social and economic progress. When a society is flourishing health tends to flourish. When a society has large social and economic inequalities there are large inequalities in health. The health of the population is not just a matter of how well the health service is funded and functions, important as that is: health is closely linked to the conditions in which people are born, grow, live, work and age and inequities in power, money and resources- the social determinants of health.

The damage to the nation’s health need not have happened…. Health inequalities are not inevitable and can be significantly reduced… avoidable health inequalities are unfair and putting them right is a matter of social justice. … What we can envisage, and work towards, is a society that creates the conditions for everyone to be able to lead lives they have reason to value.  That we do not have such a society at the moment is shown by the slowdown in life expectancy improvement, deteriorations in physical and mental health and widening health inequalities. “

The principal author of the report is Sit Michael Marmot. He is Professor of Epidemiology and Public Health at University College London. The report is an update of a report that he made ten years ago, The report provides detailed information on the health and life circumstances of deprived and disadvantaged people and makes a number of recommendations.

The Marmot report Ten years on;